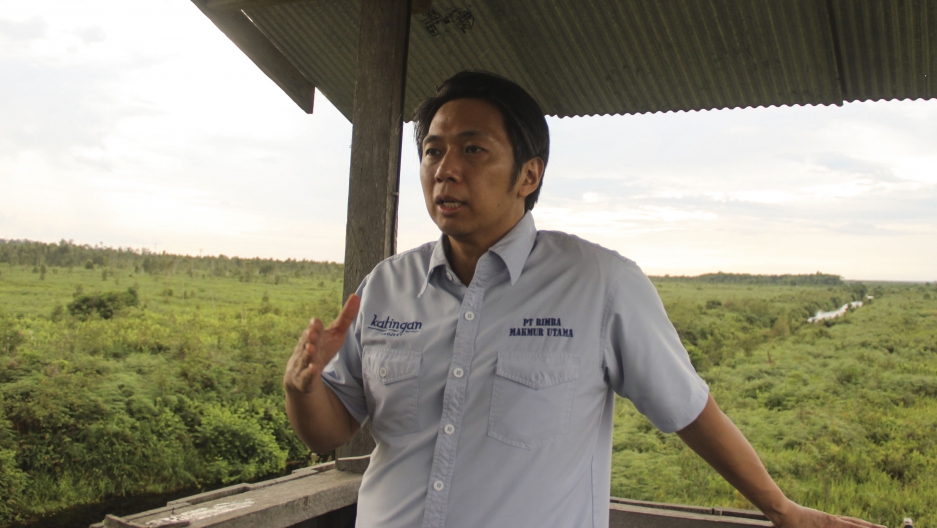 Dharsono Hartono, CEO and co-founder of the Katingan Project, one of the largest carbon credit forest preservation projects in the world.

The sun is just starting to dip toward the horizon in Indonesian Borneo, and Dharsono Hartono is standing on a fire tower, looking out over a peat forest falling into shadow.

Hartono knows that all over Indonesia, this carbon-rich type of forest is being burned or cleared for palm oil or paper pulp plantations.

But when he looks down from the fire tower with his businessman’s eye, Hartono is more interested in the soil than anything he could plant in it.

“Unlike the typical mineral soil,” Hartono says, “peat soil is actually dead wood, leaves and logs that become part of the soil.” 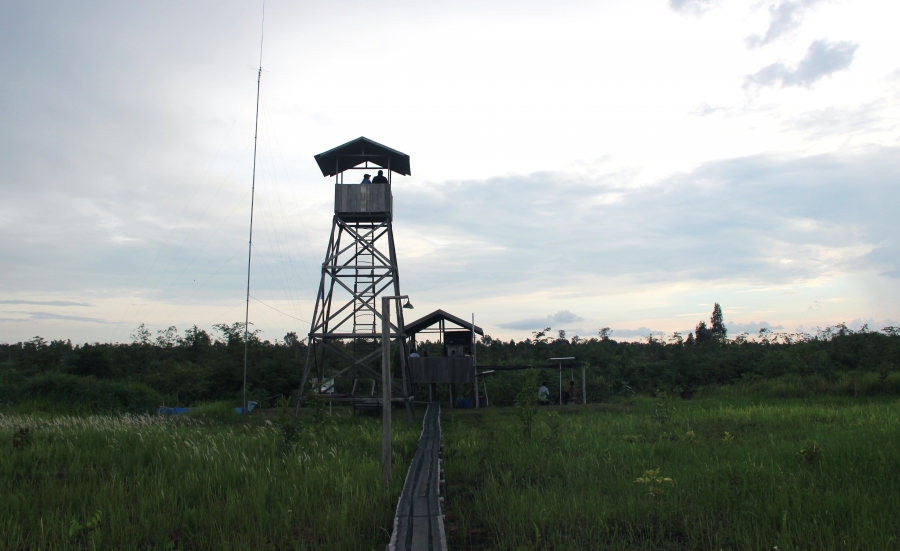 A fire tower on the southern edge of a protected area in Central Kalimantan, Indonesia helps fire patrols spot smoke.

The layers of wood and decomposing leaves create a forest floor so thick it bounces when Hartono steps on it.

If the forest in front of Hartono were converted to plantations like much of Borneo already has been, tons of carbon would be freed from the soil and released into the atmosphere, where it would contribute to global warming.

“It would emit about 6 million tons of carbon dioxide-equivalent,” Hartono says. “Which is in this case close to about 5 million cars a year.”

Hartono’s job is to prevent that from happening. And to make sure his company turns a profit along the way.

He is the CEO and co-founder of the Katingan Project, which manages 600 square miles of land in the Indonesian province of Central Kalimantan.

The project aims to protect the peat forest, then sell carbon credits based on the amount of greenhouse gasses they can keep sequestered in the ground.

Hartono doesn’t have the background of a typical conservationist.

He grew up in Indonesia but went to college and business school in New York. He did a stint on Wall Street, working in real estate for JP Morgan. Hartono was back in Indonesia by 2007, when an old Cornell friend named Rezal Kusumaatmadja approached him with the idea of protecting forests for a profit.

"He came to me with this idea [that] you can actually protect rainforest and make money out of it,” Hartono says.

“Suddenly my JP Morgan head blipped and said, ‘This is just like real estate,” Hartono says. “If you manage it properly, there will be value, there will be appreciation, you can make money out of it.”

The idea of making money on forest preservation was relatively new in 2007, but it was about to take off.

A big UN meeting in Indonesia that same year flagged forest preservation as a key way to fight climate change. It signaled that national governments may soon start buying carbon credits to offset their countries' pollution.

So Hartono set up the Katingan Project with his college friend-turned-business partner Kusumaatmadja, to capitalize on the emerging market.

His company won't be the first to sell carbon credits based on forest protection — forest carbon was an $88 million industry last year — but Hartono’s is one of the largest and most ambitious projects of its kind in the world. 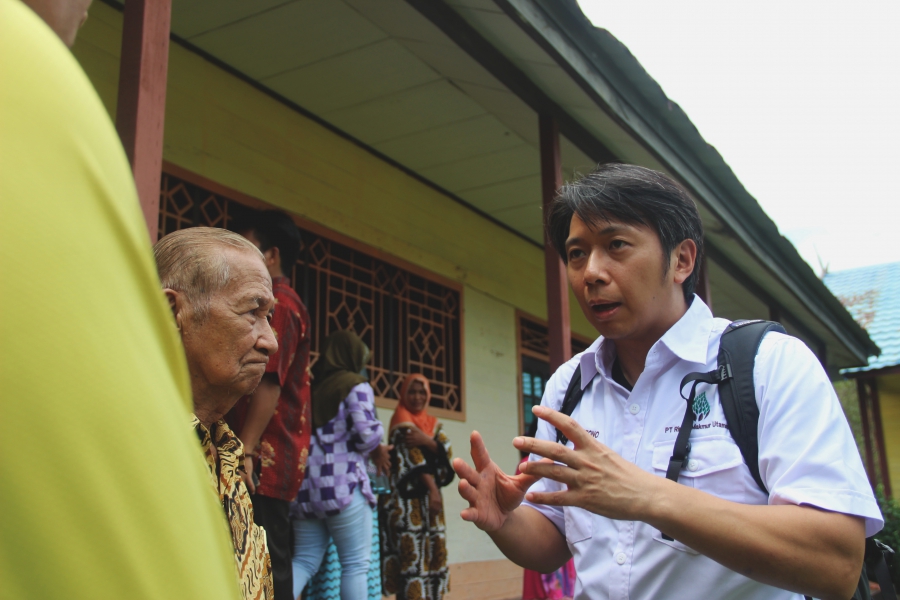 Indonesian conservationists say the slow launch of Hartono's carbon credit project has allowed him to work closely with community members to develop alternatives to slash and burn agriculture and logging.

Some see it as a test case for the kind of large, for-profit conservation projects needed to help slow global warming.

“We need to show that projects like this can work at very large scale,” says Alex Lord, project manager at Permian Global, an investment firm backing the Katingan Project.

“Showing that a project like this can work and at the same time be financially viable is essential to being able to scale up and do this on multiple continents.”

Balancing the needs of people and the forest

Saving the forest isn’t as easy as simply buying up land and not cutting down the trees, as Hartono has learned in the nine years since he started the Katingan Project.

About 43,000 people live in dozens of villages surrounding the project's land. They use the forest like their families have for generations: They log it, they burn it and they drain it for agriculture. And that is a problem.

“When there’s no water, you can just throw a match and they’ll just catch fire,” Hartono says of peat forests.

Wildfires in Indonesia last year cloaked huge parts of the country in black smoke for months. The haze kept kids from school and caused a spike in respiratory problems. The World Bank estimates the fires cost the country about $16 billion.

If that happened on his land, one wayward spark could cost Hartono’s company millions. 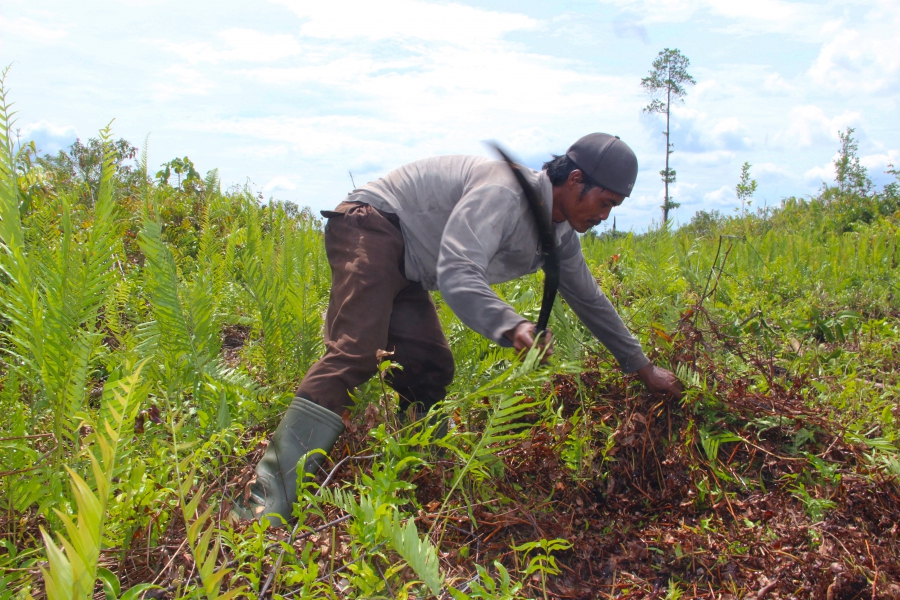 Under broiling tropical sun, small teams patrol the borders of the protected area, looking for wisps of smoke that are the only evidence of huge underground fires.

In the wet season, they clear firebreaks and build look-out posts.

These patrols are popular in the villages that border the protected area. They create jobs and help prevent wildfires that destroy crops like rubber trees and pineapple plants.

“We welcome the Katingan Project,” says a man named Bahrudin, the secretary of a village that borders the protected land. “We’re happy.”

Bahrudin and many of his neighbors are rubber farmers, and a big fire last year wiped out some of his village's crop. Anything that could prevent another blaze has his approval.

But other parts of the Katingtan Project’s fire control plan are more controversial.

The Katingan Project manages the land. The government owns it.

But some residents in the surrounding towns have long considered portions of it theirs in a traditional land tenure system. The combination of new conservation laws and the presence of the Katingan Project has cut people off from what they consider to be their land.

“Now I can’t do anything with my land,” says a man named Masdansyah, who lives in a riverside village built on stilts and boardwalks.

He used to harvest trees and burn a plot of land for farming outside of town. Now that the land is inside the Katingan Project boundaries, he can’t farm the way he used to.

“This makes life more difficult,” he says, “because I don’t have any income from it anymore. All I can do now is fish.”

“For young people who get jobs with [the Katingan Project], its impact is quite positive,” Masdansyah says. “But for old men like me, life is more difficult.” 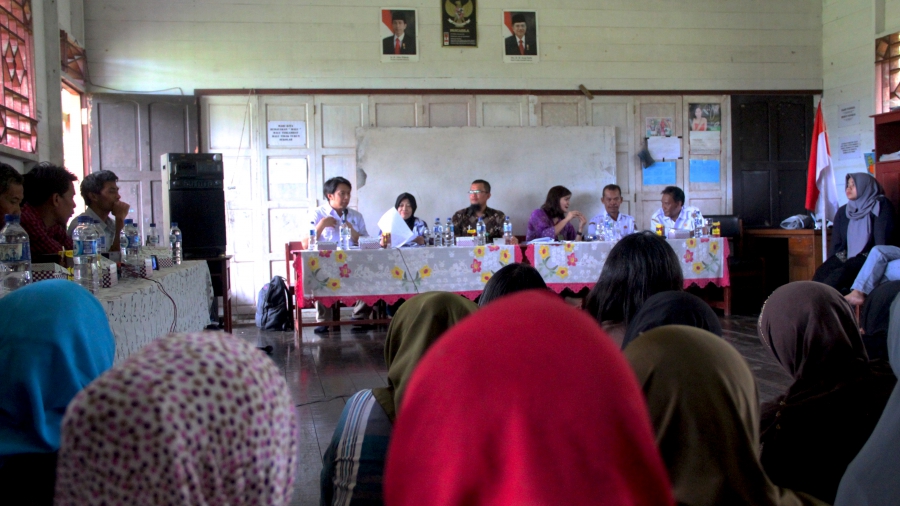 A big criticism of projects like Hartono’s is that they cut forests off from the people who’ve lived in and worked them for generations.

But because it’s taken nearly a decade for Hartono to launch his business, some in the Indonesian conservation community say he’s put in the time to make sure local communities don’t get left behind when their backyards are converted into protected areas.

Hartono is good at asking questions, and is just as comfortable talking to local farmers about their new cover crops as he is talking with investors.

“Dharsono knows how to approach the people, he listens to people’s needs,” says Happy Rezkiana, a regional environmental official in the Indonesian province of Central Kalimantan.

“He gives people a platform to talk about what they want for their community, and then helps them work toward it.”

The key to conservation is in the people, not the land

Hartono himself says he started this business focused on carbon credits and climate change.

“The more I learned, the story’s actually not about the climate change,” Hartono says. “It’s about, how can we provide livelihoods for communities so therefore they don’t cut the forest. They don’t burn the forest.”

Along with hiring people for fire patrols, the Katingan Project is teaching farmers alternatives to slash and burn agriculture and trying to develop a coconut sugar industry in one town bordering the protected area. 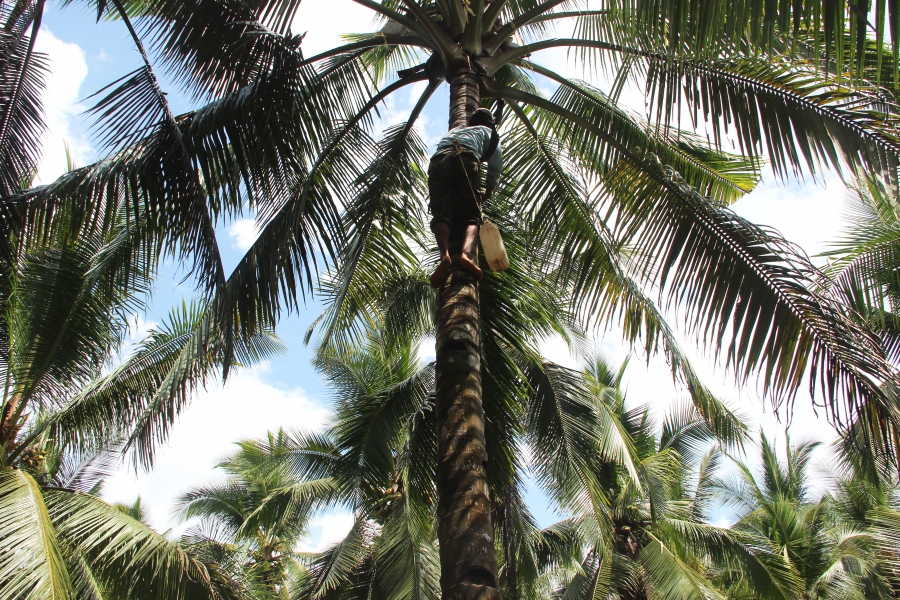 A coconut farmer in Indonesia's Central Kalimantan climbs a tree to harvest coconut nectar that will be made into sugar.

But though Hartono says he’s been gaining the trust of communities year by year, his company has yet to make any money off of carbon credits.

For a businessman used to the lightning-fast pace of Wall Street, that’s been difficult.

“I thought that in two years, we should be selling credits,” Hartono says. “It has almost been nine years and we are still not making revenue. If I would have known that this was going to be this complex, I would have walked away.”

Hartono attributes the slow start to the fact that this type of project is so new in Indonesia. Getting the right government permits has been a bureaucratic nightmare.

Then there’s the science: Measuring the carbon stored in the company’s 600 square miles of peat forest took two years, and then the methodology had to be verified by an independent carbon credit certification body called the VCS. That certification finally came through in October this year.

And just last month, the Katingan Project got its final major government permit.

“This is the risk of being a pioneer,” Hartono says. “All pioneers, they either make it or they don’t make it. I’m still very optimistic that we will make it.”

This story is part of The World's Fighting for Forests series from Indonesia. Read more here.