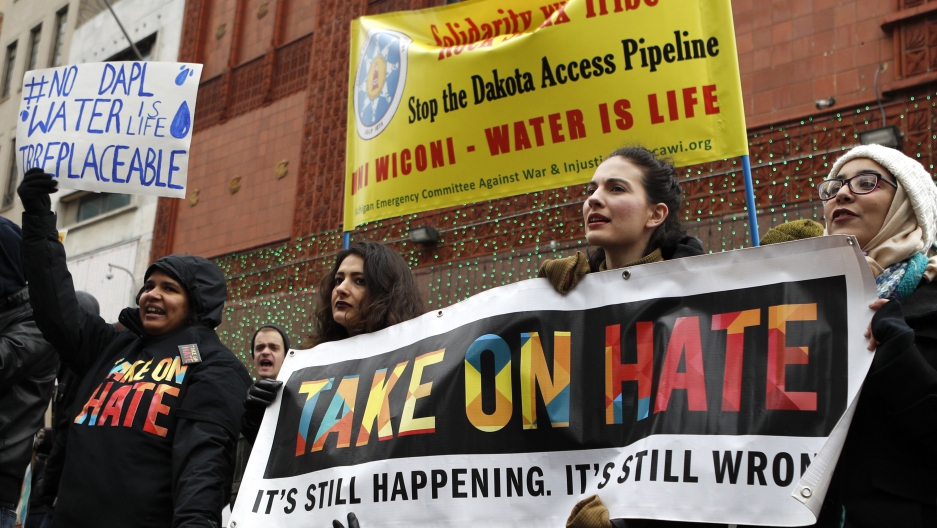 Protesters gather at America's Thanksgiving Parade on Woodward Avenue before the game in Detroit.

At a shared co-op kitchen near downtown Detroit, Nezza Bendele chops, mixes and bakes. She does it with the ease of someone who has long mastered the art of being in a kitchen.

She’s cooking for an event for social activists who fight mass water shutoffs, tax foreclosures and the unequal distribution of large swaths of land.

Bendele is part of Detroit’s racial equity movement, but instead of protesting, her work is in the kitchen. “They need energy,” she says of the activists. “You can’t fight a revolution if you’re hungry or malnourished.”

A black, vegan chef for more than three decades, Bendele is using her knowledge to nutritiously feed the community. “If our community is not healthy, we can’t keep fighting,” she says.

From Standing Rock to Occupy Wall Street, food has long had a prominent role in justice movements. In the 1950s and '60s, black women played a significant role in the advancement of colored people. Home cooks and backdoor restaurants fueled the activists marching for change.

“Georgia Gilmore was one of many women who, when their employers found out they were in the movement, was fired,” says Frederick Opie, a professor of history and foodways at Babson College and author of the book, “Southern Food and Civil Rights.” “Women like Gilmore competitively cooked and baked goods to sell to black and white folks, and used the money to keep the Civil Rights Movement alive.”

Opie says food is a critical component to activism. “As Napoleon said, an army marches on its stomach,” he says. “If there is no food, the movement will end.”

Bendele regularly cooks at organizing events and social justice gatherings. She says she feels she has to do this work. “Our community can’t reach its full potential if we are eating Hot Cheetos for breakfast.”

Yet her commitment to cooking and teaching about healthy food doesn't come without opposition. Bendele says “African Americans can be resistant to my food because eating soul food is a way to stay connected to culture and heritage.”

Soul food is connected to historical events and has social significance. Bendele is determined to instill the concept of down-home global vegan cooking as a way to teach African Americans that eating healthy is not a rejection of black soul food culture, but a healthy alternative.

“It’s the way to hold on to the memory of our ancestors, stay connected to family and our Southern traditions, all while changing the diet and feeding the soldiers.”

The topic of food and its role in social justice movements has also become a focus of arts organizations. The Charles H. Wright Museum of African American History and ArtChangeUS, a program of the California Institute of the Arts, recently held a conference in Detroit. One of the main topics? Food and justice.

A breakout session was held in the kitchen of the museum, instead of a conference room. Mama Myrtle Curtis, a co-founder of a nonprofit that provides monthly classes on how to cook delicious, local, seasonal food, was the presenter. She made fresh biscuits with plantain syrup.

“We have to change the way the folks think about food and how it’s rooted in food justice and food sovereignty,” says Curtis. “We want to get people back in the kitchen and away from fast food.” Fast food chains disproportionately target black children, and community elders say this is as important as water shutoffs.

Curtis’ work is about cooking, but her greatest emphasis is on growing fresh, healthy food — a central premise of black advancement. Some "urban-ag" leaders like Curtis have focused exclusively on nurturing African Americans to grow their own food and be leaders in food justice and food security in Detroit.

Dorceta Taylor is the director of diversity, equity and inclusion at the School of Natural Resources and Environment at the University of Michigan. She says that “recent food movements are usually formed by white people with economic means,” which means discussion of food and agricultural movements are constructed and publicized mostly by white folks.

“They get to decide what the movement is,” says Taylor. “[White folks] don't have language around food inequality and resist to understand how access to food ties to structural inequality.”

“For blacks and Native Americans, links to food go back to the slave days when we did not have sovereignty,” says Taylor. She says women like Bendele and Curtis are changing the current discourse around justice and food.

About a mile from the Wright Museum, Jim Rehberg from the Wobbly Kitchen collective, hosts biweekly Sunday meals in Cass Park. The park sits in the middle of two of the most developed neighborhoods in Detroit. Newly refurbished buildings, a Whole Foods grocery store and bars with $12 cocktails surround the once vibrant urban space.

Although multimillion-dollar development projects are a short, walking distance away, the park is still a gathering place for the city’s low-income community.

Cooperatives like Wobbly Kitchen are providing homemade meals for Detroit’s “forgotten workers” — manufacturing employees who once had a decent standard of living and now live in poverty.

The collective is made up of former union members who began cooking during a contentious Detroit newspaper strike from July 1995 to February 1997. “In the beginning, [there] were huge meals for about 1,000 people,” says Rehberg.

Unions were instrumental in creating the black middle class in Detroit, and the concerted effort to dismantle labor unions in the last two decades has left workers in economic disaster.

“We live in a city that had thousands and thousand of jobs,” says Rehberg. “Workers tell me, ‘I used to have a family, I used to have a home, Thanksgiving used to be at my house, I had all the things people had in the '70s and '80s.’”

He admits that the food he cooks isn’t a fix to inequality, lost jobs or lower wages, but it is a commitment to supporting activists and people in their own struggle — that, he says, is the essence of any social movement.

“We have something to contribute in our food,” says Rehberg. “Cooking and eating food is what we do as people, it’s where important discussions around politics, justice and humanity happens.”