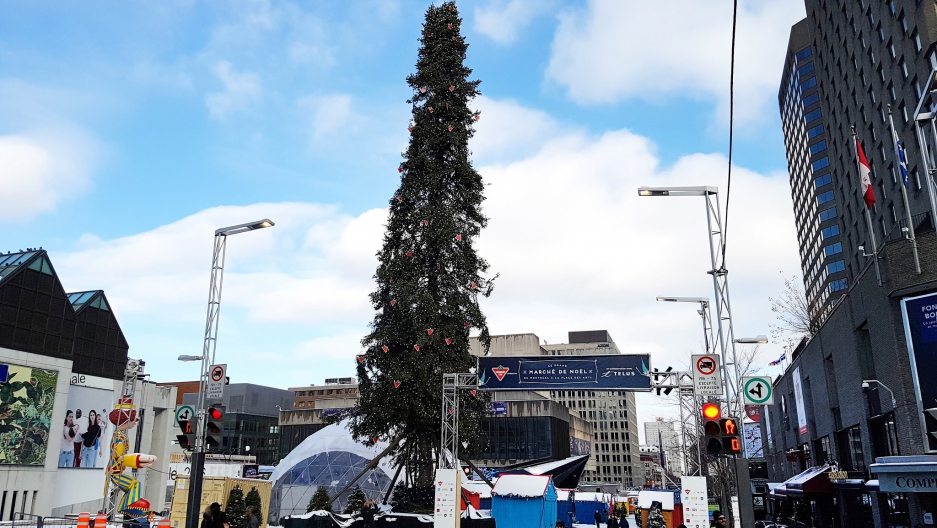 It was supposed to be Canada's tallest Christmas tree.

In fact, it was supposed to rival the Christmas tree at New York City’s Rockefeller Center.

But it fell a bit short and more than a bit skinny.

A giant balsam fir tree in the Canadian city of Montreal is being compared to that classic Charlie Brown Christmas tree.

The 88-foot tree is not only droopy, gangly and lopsided, but decorated with mini red triangles that are the logo for a home goods store. Not exactly an artistic masterpiece.

“It was a classic story of over-ambition and lack of money," says Austen.

A small tree delivery company in Montreal wanted to put up a festive tree that would be the largest in Canada.

But the tree that was chosen had to be hauled on a flatbed truck from southern Ontario. And it didn’t hold up well on that journey.

Branches fell off along the way, and now it’s become the subject of ridicule on social media.

One sad tree in Montreal  pic.twitter.com/jYu1d0qTXo

Leave it to Montreal to install a tree so ugly it makes international news.

It even has its own mock Twitter account: @sapinlaid, which translates to “ugly fir.” Tweets say things like: “I am thin and unkempt and poorly decorated and that's all. Get over it! #KissMeImUgly #Sapingate #SapinHaters.”

But just like Charlie Brown's tree, there is some love for this one.

Montreal has its own Charlie Brown Christmas tree. I think it's awesome. @UglyTreeMTL

#Montreal must embrace its awful #ChristmasTree. Turn the fail into a win. "Come see the exact opposite of the #NewYork Rockafeller Tree!"

Hey! We kinda like our giant albeit crooked Christmas tree...that's why we're Montreal