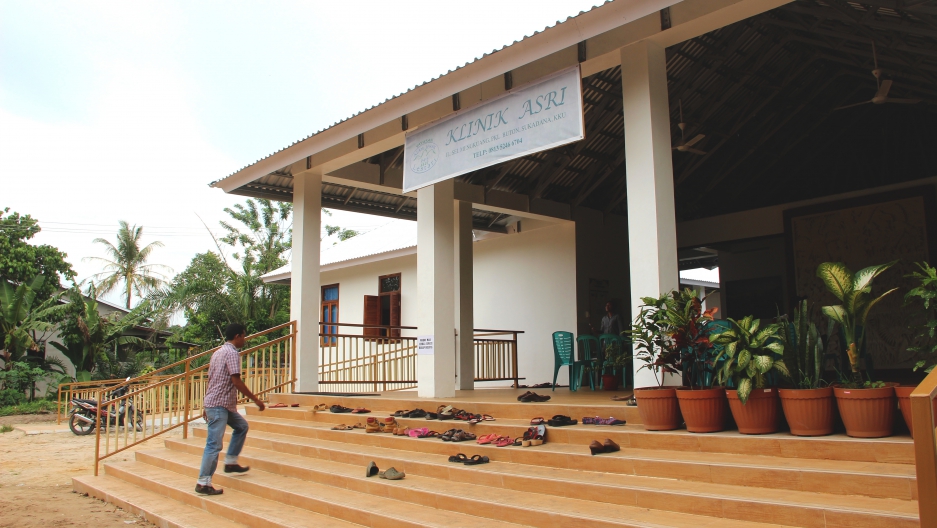 ASRI's health center in Sukadana, Indonesia, expanded into a new hosptial in October.

In a village on the western edge of Borneo, there's a small hospital where people come from miles around to get treatment for everything from a broken arm to a heart attack.

Good health care in a remote town like Sukadana, in the Indonesian province of West Kalimantan, is hard to come by.

But there’s another thing that sets this one-story, metal-roofed clinic apart: how patients pay for their health care.

"You can pay with non-cash means," says Dr. Kinari Webb, founder of the ASRI clinic, known by the acronym for its Indonesian name, Alam Sehat Lestari. "So that people don’t have to log in order to pay for health care."

Patients can pay with manure, seedlings, handicrafts including hand-woven baskets, or their labor. 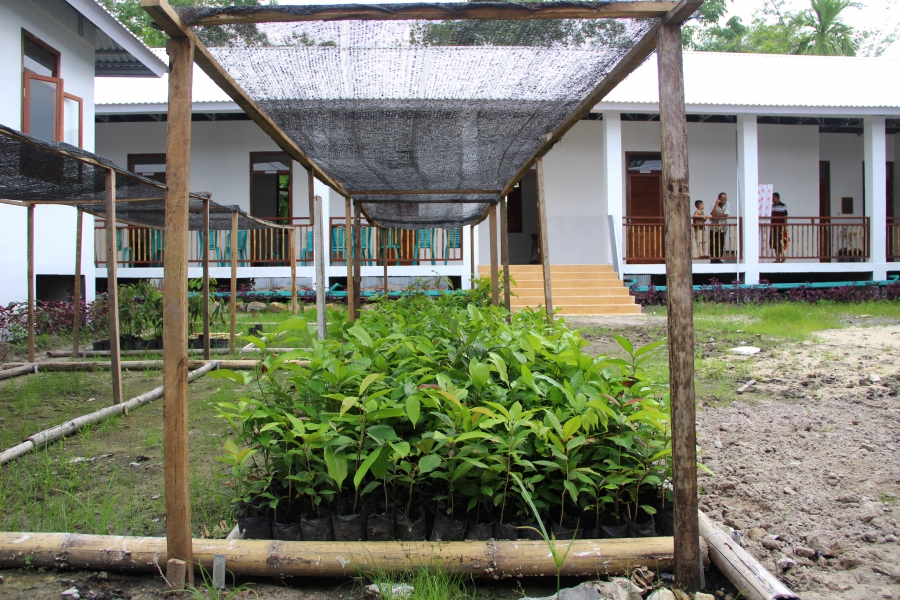 In ASRI's courtyard, seedlings that patients have used to pay for healthcare are a sign of what's different about this clinic.

And no matter the currency they use, patients get a 70 percent discount if they live in an area where illegal logging activity has stopped.

About 60,000 residents of dozens of villages on the edge of the nearby Gunung Palung National Park are eligible for the discounts, which are tiered based on how much logging activity is happening in each village.

Webb’s mission is to improve the health of local residents while creating social pressure to stop illegal logging in and around the park, which is a haven for wildlife like the endangered Bornean orangutan.

A winding path to opening a health clinic

Webb was inspired to create this clinic when she took a year off college in the 1990s to study orangutans deep in the Indonesian jungle. As a passionate but slightly scattered college student, Webb thought it would be the first step toward a career in primatology.

But then, all that changed. 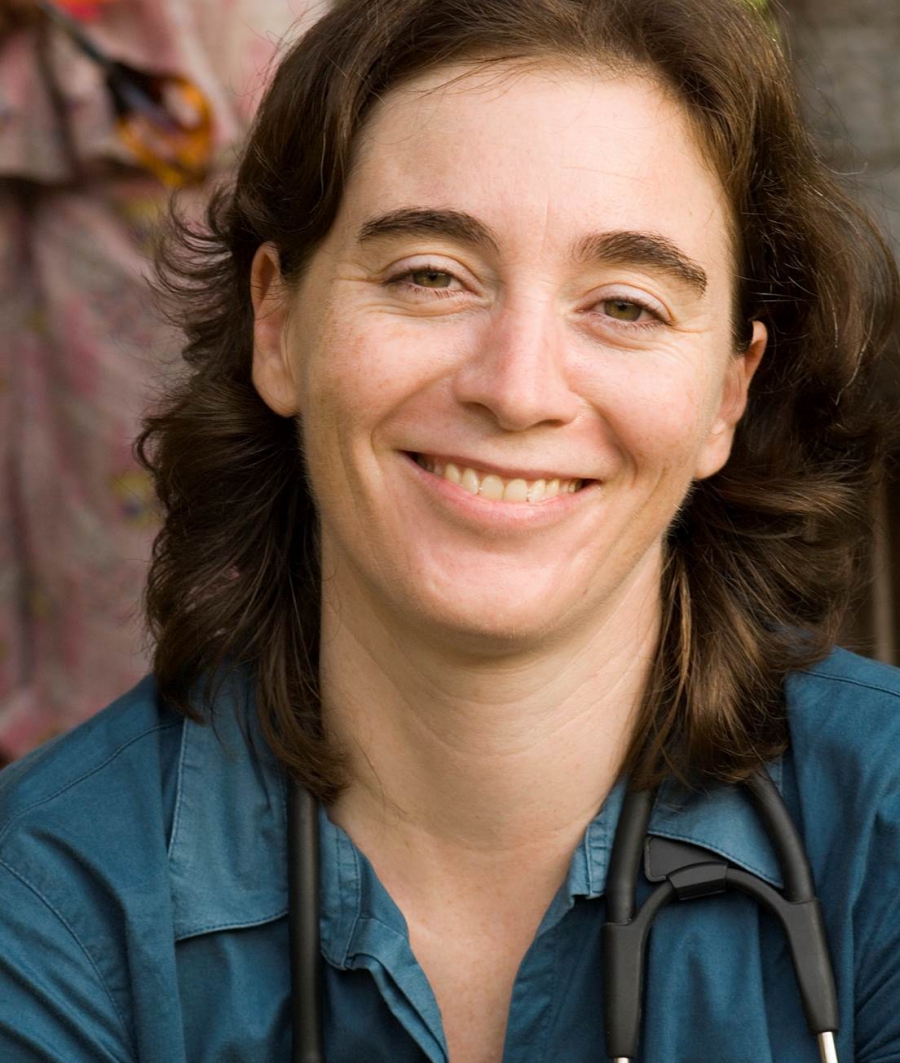 Kinari Webb, founder of Health in Harmony and the ASRI clinic.

“There’s this one thing that happened to me that just really shifted where I thought I was going with my life,” Webb says.

An Indonesian colleague cut his hand when a machete slipped. It was just a small cut, so his reaction stunned Webb.

"He looked at me with the fear of death in his eyes," Webb says. "Truly terrified. And I couldn’t understand it until I had this moment of shock.”

Webb grew up without a lot of money in what she calls a small hippie town in New Mexico. But at that moment, she realized her former home was nowhere near as remote or removed as she’d thought. Her colleague had never had a tetanus shot, and the nearest good hospital was more than 20 hours away. So he was scared.

"If he loses his hand, or the function of his hand, he will die,” Webb says she realized.

Recognizing the connection between health and the environment

The endangered orangutans Webb had been interested in in college get a lot of attention in Borneo.

But on that day more than 20 years ago, Webb realized that the people who lived in this remote town needed help too.

And the health of both were linked.

Because when her neighbors in the jungle town of Sukadana could get to the doctor, Webb learned they often paid for their health care and travel expenses by illegally cutting and selling timber from the nearby national park.

“One of my neighbors in Sukadana, he cut down 60 trees to pay for a C-section,” Webb says of a more recent episode.

Indonesia has lost about a quarter of its forests in the past 25 years. You can see that in Sukadana today. Many of the narrow roads in the region are flanked by cleared land. Patches that have been burned for gardens sit smoldering by the roadside.

Rising up in the middle of all that is Gunung Palung National Park. It’s about 400 square miles of jungle, an island in a sea of villages, farms and palm oil plantations. It's an increasingly vital safe zone for roughly 2,500 endangered Bornean orangutans, but as all the good timber surrounding the park was cut, even that protected area came under threat.

Webb says back in the '90s, you would constantly hear chainsaws buzzing away inside the park, and feel the trees falling. 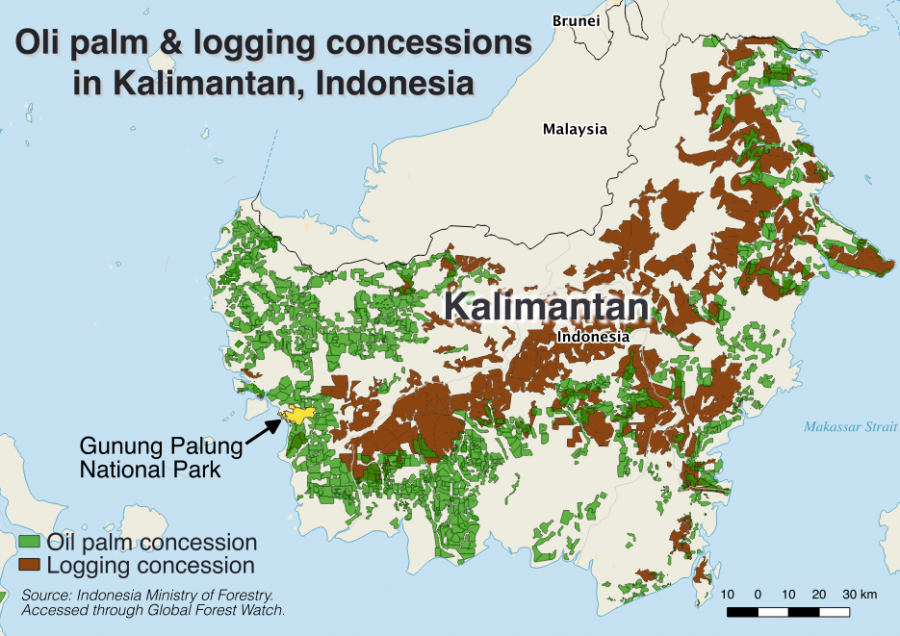 "It's like an earthquake in your feet," Webb says. "You can feel the shaking of the earth when they land."

Seeing first-hand the connection between health care and logging in Indonesia pushed Webb to abandon her college idea of becoming the next Jane Goodall. Instead, she decided to go to medical school.

"I actually believed that the best way to save rainforests and to save orangutans was going to be to provide health care," Webb says.

A ‘thank-you gift’ to forest protectors

Webb founded her clinic in Sukadana in 2007, and this October she expanded it and moved into a small hospital nearby.

Webb has largely handed off day-to-day operations of the clinic to her Indonesian staff, and now splits her time between Indonesia and the US, where she raises money for the hospital through the non-profit organization Health in Harmony.

When Webb explains her clinic, she frames the donations that allow for cheaper health care as a "thank-you gift" from the international community to Indonesians who have the power to protect the forest.

In Sukadana, sometimes patients who have to pay full price for their care argue with the hospital’s cashier Nani Utari, saying that this system is unfair.

“Why should I pay more than the others when I didn’t do anything bad in my village, I never was a logger?,” Utari says some people say.

She uses these protests as teaching moments.

“Even if you’re not doing the logging,” Utari says, “the deforestation impacts you. This is your chance to talk to the loggers to try to get them to stop.”

The whole clinic was founded on this idea of creating social pressure to stop logging. It’s worked on a man named Masdi, who brought his wife to the clinic last month to be treated for a heart attack.

He says he’s talked to his neighbors to try to convince them to stop logging. It hasn’t happened yet, so he’s still paying more than some other patients at the clinic. But he says because ASRI provides such good care, he doesn’t mind.

“Right now, I’m just thinking about one thing: I want my wife to be well again,” Masdi says.

Labor-intensive methods mean it may be hard to scale up

ASRI staff monitors logging in the villages surrounding the Gunung Palung National Park, keeping detailed spreadsheets of how many loggers live in different sub-districts and other evidence of illegal logging.

The clinic and conservation team together require more than 100 people to run, and the remote forested areas most in need of protection from logging are some of the hardest places to reach with health care infrastructure. Skeptics say this is one of the limitations of Webb’s model, and something that would make it hard to reproduce elsewhere. 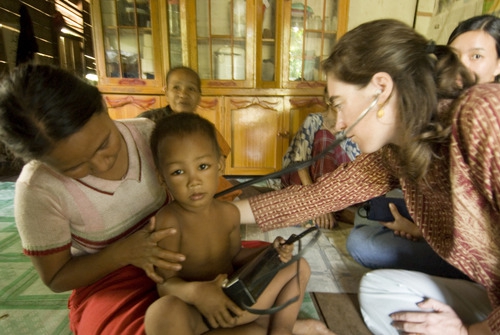 Kinari Webb performs an exam at her clinic in Indonesia.

But Webb isn’t easily deterred. Her team is currently scouting locations to expand to a second location.

Right now, from their base in the town of Sukadana, Webb's team is protecting only a tiny area: More than 10 parks the size of Gunung Palung National Park could fit inside the land that’s deforested in just one year in Indonesia.

Still, her data show that in that tiny patch, logging has gone down in the nearly 10 years that Webb’s clinic has been in operation.

According to ASRI data, when the clinic opened, there were an estimated 1,350 logging households around the national park. That dropped to 450 after the clinic had been in operation for five years, and today, Webb says fewer than 200 people (that's individuals, not households) in villages bordering the national park are loggers.

Local conservation experts say the orangutan habitat within the national park has remained relatively protected since Webb’s clinic opened. And reduced deforestation also means less climate-warming carbon dioxide is being released into the atmosphere when the forest is cut.

It’s hard to know how much of that change is due to Webb’s work. There have been other efforts to discourage illegal logging over the last several years. And while logging has gone down, there’s evidence that illegal farming in the park has gone up.

Becoming part of the community

What is clear is that after a decade, Webb has become a beloved figure in the community. That wasn’t always the case for this American woman in a remote part of Borneo.

"Some people were suspicious of this Westerner," says ASRI's current executive director Dr. Monica Nirmala. "They were thinking that [her clinic] might be a Christian mission or something like that.”

But Nirmala says that distrust has melted away, in large part because the clinic treats and employs people of all backgrounds and religions, and has become part of the community.

"I think one of the best things that she did was that she created a great team,” Nirmala said. “Ninety-nine percent of [ASRI employees] are Indonesian, only one American works here. [Webb] really could pass the work to us.”

That actually happened about five years ago when a freak encounter with a box jellyfish left Webb bedridden for two years and forced her to hand over day-to-day operations of the clinic to her local staff.

Webb’s colleague Nirmala says here, in a place better known for its endangered orangutans than the poor health of its residents, putting people first has been key to Webb’s success.

“Sometimes people do not really accept conservation organizations because they think that we only care about the forest, we don’t care about the people," Nirmala says.

"But I think by providing health care and also linking them to conservation work, it’s really effective. People trust their doctors and then they listen to us.”

Join us on Thursday, Dec. 22 for a Reddit AMA (Ask Me Anything) featuring Dr. Kinari Webb, founder of Health in Harmony.

This story is part of a series on social entrepreneurs working to limit or reverse deforestation in Indonesia. Find more stories here.