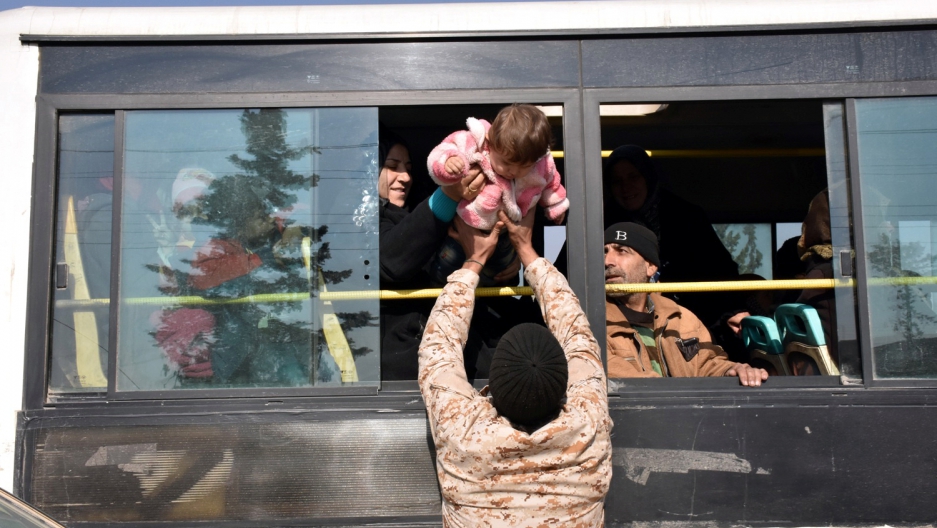 Another heartbreaking evacuation in Syria, Monday, is pictured here. But these are Shiite civilians fleeing rebel shelling, according to the Syrian government news agency, SANA.

The images and voices from Aleppo have tugged at heartstrings across the world since the final battle began there a month ago.

Citizens and aid workers cried for help, and tweeted their farewells, as rebel resistance crumbled before a brutal onslaught from the Syrian government.

The US Ambassador to the UN, Samantha Power, said Aleppo joins the ranks of Srebrenica and Rwanda as emblematic of evil.

But the government of Bashar al-Assad, together with its Russian and Iranian allies, tells a very different story. Of a battle of liberation against Islamic “terrorists.”

They argue that the world has been played by a slick rebel PR machine, controlled by jihadis.

There are elements of truth in both narratives.

“It’s a very complex picture,” says Joshua Landis, director of Middle East Studies at the University of Oklahoma. There is no black and white.

There were about 10,000 armed rebels in Aleppo, according to the UN special envoy for Syria, Staffan de Mistura, and about one-third of them were jihadis, close to al-Qaeda.

“That’s the difficulty right there,” says Landis. Some of the rebels were jihadis, but not all of them. However. The “good” rebels are closely allied with these soldiers of al-Qaeda, in a common fight against Assad.

“Now, many of the citizens,” adds Landis, “that were there in eastern Aleppo, some of them never wanted to get into this war to begin with. Aleppo, interestingly enough, did not rise up and join the uprising in 2011. The rebels — who were mostly from the countryside around outside of Aleppo — were furious at Aleppans for not joining in the fight. ... It’s a very complicated situation where some of the civilians support the rebels, others do not.”

Landis says the rebels had a carefully packaged narrative of “the hateful regime, and Russia, who have no regard for humanity, destroying democracy-loving people.” Landis acknowledges there is an element of truth to that, but it’s much more complicated than that.

The rebels, Landis says, are using media-savvy people to help deliver this message. But he adds “it doesn’t mean the horrors of the war in Syria are untrue, it just reveals the much more complicated story that every civil war really reveals.”