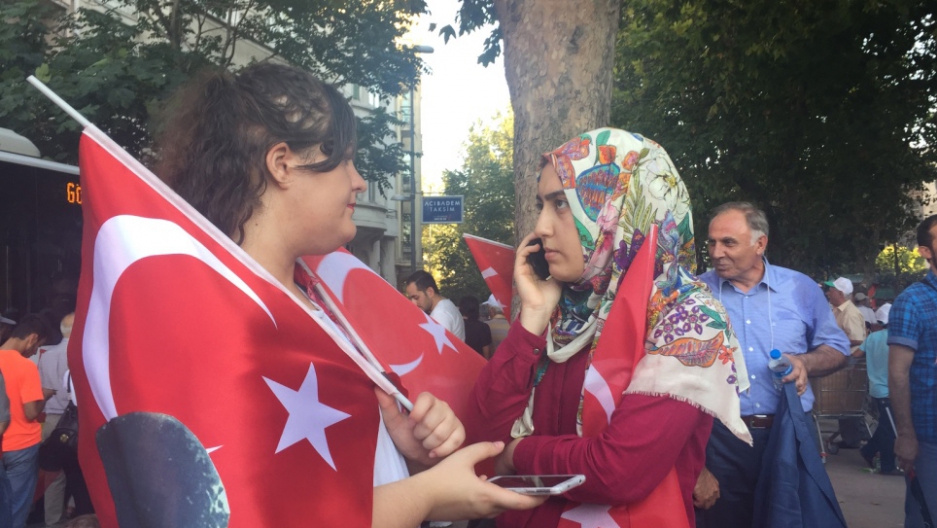 Two women discuss Turkish politics during a joint rally in Istanbul between the Islamist and secularist parties shortly after the attempted coup in late July.

In a café at Istanbul Arel University, a group of friends — secular and religious, Kurdish and Turkish — gather to talk about their country’s changing identity. One topic of discussion among two of the young women, Betül and Melis, is the headscarf.

Both women asked that we not use their last names to protect their privacy in Turkey’s current political climate.

Betül, 21, began wearing a Muslim headscarf in 2011, just after it became legal in public universities and government institutions. But Betül says women in headscarves still faced discrimination. In high school she says she had to take off her headscarf when she participated in the debate team. And when she applied to the public Istanbul University, she was rejected.

“I wanted to go to that university because my cousin was there, but they wouldn’t admit me,” she says.

She thinks it’s because she wears a headscarf.

So Betül, who studies psychology, chose Arel, a private liberal university, where she says no one monitored her clothing.

Turkey’s secular government outlawed the headscarf for civil servants and public universities in 1980, citing the need for the separation of state and religion. Religious women sometimes resisted, risking their jobs and degrees. They wore hats and wigs to go to school and work.

In 2011, Turkey’s Islamist government lifted the ban. And in the past five years, secular Turkish women say they find themselves judged by an increasingly conservative society.

“It used to be that women in headscarves were mistreated, but now it’s the opposite,” Betül says. “We should have empathy for one another.”

Melis, who considers herself secular, also studies psychology. She says she’s angry and frustrated by the negative attitudes about secular women she now encounters in Turkey. It’s a real problem on public transportation, she says. She remembers one recent incident on a crowded metro, when there were no seats.

“I was feeling sick and looking pale. A man kept staring at me,” Melis says. “He didn’t give me his seat but as soon as a covered girl around my age walked in, he offered his seat to her. He looked straight at me, but said to her: ‘You deserve this seat.’ I felt worthless.”

Melis says she’s thinking of leaving Turkey after she’s done with her studies, maybe to travel to Europe. She doesn’t feel like she fits in any more.

“As someone who values my freedoms, I don’t think the government protects my rights, and I don’t think it will protect the rights of a child that I would raise. I believe [Turkey will] become much more conservative. That’s why I don’t want to stay here,” Melis says.

The secular-Islamist polarization in Turkey plays out on women’s bodies in public spaces. Those who cover are considered supporters of the ruling Justice and Development party, or AKP, and women who don’t cover are seen as symbols of Turkey’s secular tradition. The reality is more complicated than that. But the headscarf has been a contested symbol of liberation or oppression throughout modern Turkish history.

Nurbanu Dursun, a graduate student at the premier Bogazici University, says women in headscarves are accepted in public universities as students but not necessarily in academic positions. Dursun, who covers her head, says Turkey’s intelligentsia is still dominated by secular women.

And in a few liberal neighborhoods of Istanbul, women in headscarves continue to be ridiculed as backward.

But in many conservative neighborhoods, women who don’t cover face harassment. And it’s not just dirty looks and name-calling. In September, during the Eid holiday, a man on a bus attacked a nurse, cutting her face. He shouted “women who wear shorts must die.”

A protest broke out immediately after the attack was publicized. Women say if they don’t raise their voices, the government pays little attention.

Erdogan has publicly encouraged women to be religious, marry, have at least three children and work only part-time. He has criticized secular, educated, single women without kids as “half women.”

Emma Sinclair Webb, director of Human Rights Watch in Turkey, says the government can have a family values agenda, but it shouldn’t discriminate against those who don’t fit that mold.

“These have been very insulting and polarizing discourses coming from above about women’s roles and women’s identity in this society,” says Sinclair-Webb.

Betül and Melis, the two friends at Arel, say their government needs to be more pluralistic. Betül says she feels more at home in Turkey than Melis, but doesn’t want to see women like Melis marginalized.

They both say meeting each other has challenged their preconceptions.

“I was a person with a lot of prejudice,” says Melis. “I overcame this with Betül. Some of my opinions, particularly about women with headscarves, have changed.”

As for Betül, she says one reason she chose this private university was to be among students who think differently from her. That’s the best way to foster tolerance, she says, and she’ll fight for respect for every woman, not just those wearing headscarves like her.