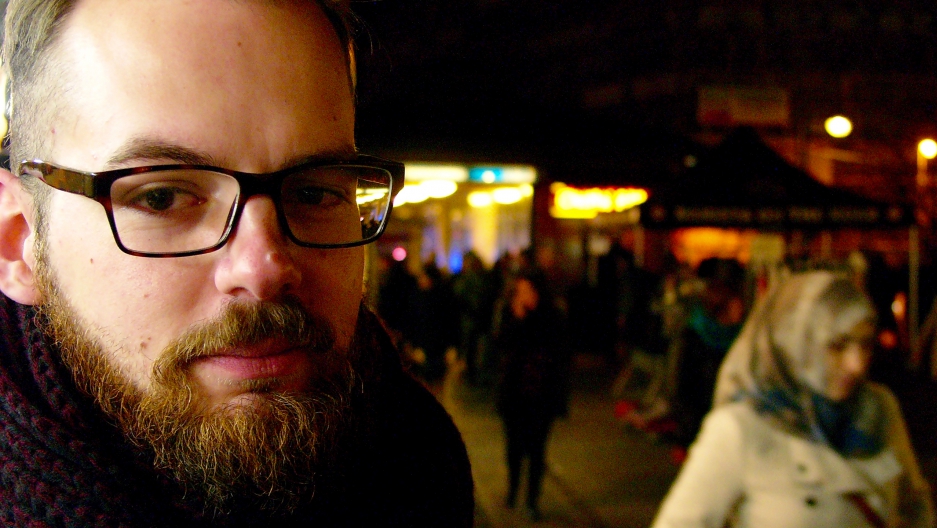 Robert Timm has been active with the Identitarian Movement in Berlin since April 2016.

"German patriots" is what they call themselves. And they are part of a broader “new right” emerging in European politics.

They are the Identitäre Bewegung, which translates into English as the "identitarian movement."

As a political action group, the identitarians are still quite new in Germany. They lack a carefully crafted, detailed political ideology. But above all else, they say they want their government to put stricter limits on immigration, especially from Muslim countries.

The identitarians also insist that it is possible to be proud of one’s own culture and traditions without being tarred as a racist or, as in the case of Germany, a neo-Nazi.

“You really have to look for Germans around here,” Robert Timm, a spokesman for the identitarians in Berlin, told me on a recent evening as we walked past the subway station at Hermannplatz. The busy intersection of Karl Marx and Hermann Streets gets its name straight out of German history. “Herman the German,” as he’s known, was a German tribal warrior who fought the Romans in the early first century.

These days, the Berlin neighborhood around Hermannplatz is home to a large population of immigrants from Syria, Iraq, Afghanistan and elsewhere. Looking around at all the shopkeepers, street food vendors and passersby, Timm told me that he is worried about the future for Germany.

Referring to the approximately 1 million refugees and migrants who have entered Germany in the last one-to-two years, Timm said, “If I look at how many people have arrived lately, and how many we are expecting to arrive in the future — we have no idea how to integrate them really — it’s a big, big problem.”

Timm is a 25-year-old architecture student with a hipster beard and glasses who drops salty English slang expressions into his conversation with ease. Like many of his fellow identitarians, Timm is social media-savvy and appears to spend a lot time online. He says he takes heart in the fact that the identitarians are not only being criticized by people on the political left in Germany, but by extremist far-right groups as well.

Earlier in the day, we sat down to talk at a German restaurant in East Berlin, where Timm grew up. And I asked him if Donald Trump’s campaign pledge to “Make America Great” reflected the identitarian ideology too.

“We are trying to play with [Trump’s] rhetoric,” Timm said. But he added that his movement needs to be careful, because “make Germany great again” is an expression that the Nazis used.

Timm, who started getting involved with the identitarian movement in April, said a more appropriate expression for the group's beliefs might be something like, “Make Germany Stay Germany.”

Identitarians reject some of the core beliefs embraced by older far-right groups, Timm told me, such as anti-Semitism. If someone trying to join his group expressed anti-Jewish ideas, or denied the Holocaust, he said that person would not be welcome.

Some of Trump's “alt-right” supporters like Richard Spencer, who advocate for preserving and protecting the white race in the United States, have said they prefer to describe themselves as “identitarian.”

But Timm said the identitarian ideology should not be mixed up with the so-called alt-right in America.

“We don’t believe in white supremacy, but we do believe that every nation has its own culture and that’s something we should hold on to. And that comes along with strict laws on immigration, but it has nothing to do with supremacy. That’s something we don’t want to be involved with,” Timm said.

A certain amount of immigration in the modern world is expected, he said. But the current migrant crisis requires Germany’s borders to be closed temporarily, he added.

The "identitarian" brand, as it were, began in France. It spread to Austria with the help of a 27-year-old activist named Martin Sellner, who once belonged to a neo-Nazi group but now distances himself from extremist views and says he does not endorse violence. This is also a distinction the American alt-right makes.

Timm said identitarian activists in Germany number between 300 and 400 and tend to support the far-right Alternative for Germany party. The Identitarians have borrowed tactics from left-wing groups like Greenpeace. They seem to relish pulling off political stunts and then putting up videos of their protest actions online.

In August, identitarian activists scaled the Brandenburg Gate in Berlin, they waved their black and yellow flags, and then hung up a banner that said, “Secure the border, save lives.”

One video on YouTube (below) shows German identitarian protesters chanting, “Home! Freedom! Tradition! Stop multiculturalism!” In another video, someone whose face is covered goes around parts of Berlin and spray-paints a message in Arabic on sidewalks close to mosques and immigrant areas that reads, “Go home.”

“I’m completely all right with controlled immigration,” Timm told me. “I think there are many people that have the right to be here, because they’re being pursued in their country and there’s war and all that. But all this has to work on very strict circumstances. And still, it has to be insured that Germans stay the majority in Germany.”

That argument might appeal to many Germans. But to those on the far left, the identitarians represent nothing new. An 18-year-old activist named Rosa, who didn’t want to give her last name, told me she has taken part in counter-demonstrations against the identitarians, because she sees them as nothing more than neo-Nazis in disguise.

“They’re racists, but they say they’re not racists,” Rosa said. “They’re trying to be cool, and young, and act like one of us, like normal young people.”

Rosa said she is not persuaded by Timm’s statements against anti-Semitism. “They’re intolerant,” she said of Timm and his fellow identitarians.

“They [have] a lot of Nazis [among them]. They’re dangerous. They influence and manipulate people in a way that I cannot accept,” she said.

Germany's domestic security services say they are keeping an eye on people affiliated with the movement. Membership with extremist far-right groups that, for example, promote violence or openly espouse Nazi ideology, are illegal in Germany.

Werner Patzelt, a professor of political science at the Technical University of Dresden, researches far-right populism in Germany. Patzelt told me that he is withholding final judgement on the broad identitarian movement in Europe, because these groups are so new.

“Identitarians are positioning themselves on the left wing of the right side of the political spectrum, trying to make clear that one can be willing to preserve distinct Polish, French, German culture without being a Nazi,” Patzelt said.

“On the other hand, those from the left side of the political spectrum do not believe in that. They would claim that identitarians only pretend to be, so to speak, enemies of really right-wing extremists, but actually they are in sympathy with them.”

Whatever becomes of the identitarian movement in Germany, there is one thing that many people here — left, right and center — seem to agree on: The identitarians’ ideological allies from the Alternative for Germany party appear to be very well placed to win lots of seats in next year’s national election.