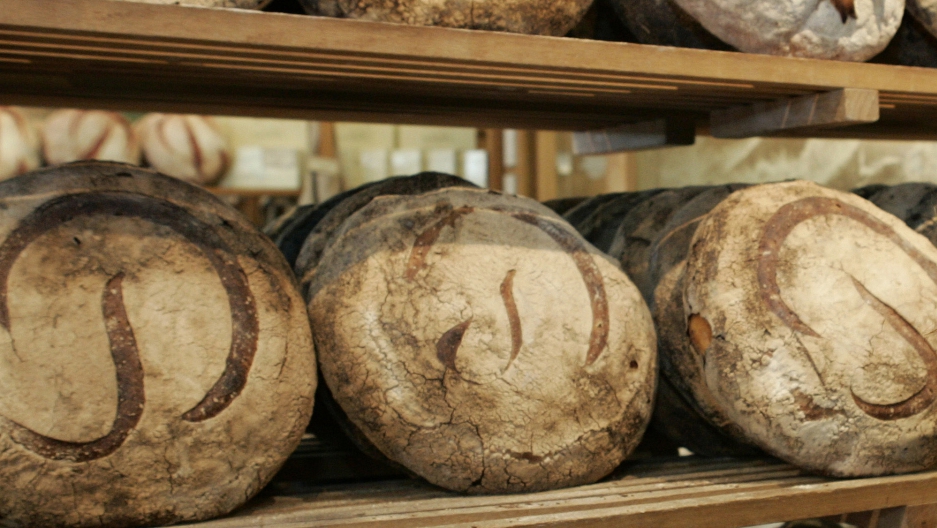 If not for a man politely declining a fatal helicopter ride, I might not have the world's greatest bread in my freezer.

That's why it's critical to enjoy the good moments. And that's what I plan to do. I'll slice the bread and pop it into the toaster, smear it with butter and jam, pair it with coffee and be thankful.

But I'm getting ahead of myself. The real story starts — like any good food story does — with a connoisseur. His name is Ihsan Gurdal, and he has quite a story. He's a transplant from Turkey, the size of a volleyball player, and a man who wraps you up in his passion for food, and especially for his favorite bread, Pain Poilane.

It's known as the "Bread of Paris." Many journalists have sanctified it in long-form articles. Famed food writer David Lebovitz says he moved to Paris, in part, to be closer to the Poilane bakery.

All of this for a bread that, at first glance, is nothing fancy. It's just a big, round, four-pound loaf of sourdough. It has minimal ingredients: flour, water, starter, salt. But Poilane has nearly a century of perfection behind it and a unique "terroir" for each of the ingredients. People talk about their first time with Poilane the way you might talk about your ... first time.

"The crust. The taste. The texture," says Gurdal. "Even the smell of that bread was stunning."

Those who try it cannot go back. And that's why Gurdal started over-nighting it from Paris, once a week, to his neighborhood grocery store in Cambridge, Massachusetts.

“The bread is baked on Wednesday, packed hot, and put on an Air France flight,” says Gurdal. “It would arrive to [Boston] and it would get delivered to us Thursday morning. At least, that’s how we started it. We use FedEx now, I think, and you can now even get Poilane delivered to your front door.”

Gurdal doesn't advertise the service. But he's been doing it now for about a decade. His loyal clients are willing to pay an ever-changing amount in the vicinity of $10 a pound for the bread. Gurdal says those bread fanatics range from the very well off to those without a home.

“There's this old man who panhandles in Harvard Square,” he says. “And he looks older than he probably is ... but every Friday morning he will show up here on a bicycle, change his clothes, come into the store, and buys a quarter loaf.”

I tried to track this guy down, but he hasn't showed up at Gurdal's store recently. And the homeless men in Harvard Square didn't know who he was, or where he went.

One customer I did track down was painter Jim Wright. I met him one morning at his studio. He'd just picked up his Poilane from Gurdal's shop. Wright admitted the whole thing is a little ridiculous.

“There's a little bit of, an awkwardness about buying a bread from Paris. It's a little akward. But I enjoy it so much. And I tried so many other different breads and yet I keep coming back to Poilane. So until I find something locally that's just as good or satisfying I'm going to keep up with it,” he says. “And you know, I also rationalize it in thinking, 'Well, we also get vegetables from California and it's just about as far.”

Wright first tried Poilane in the 1980s. And his weekly pick-up at Gurdal's shop takes him back to that Paris bakery. Taste always does. Food has a way of transporting us. It keeps memories fresh. At the very least, it's just something nice.

Among the bread fiends I talked with, few are as committed to Poilane as the man who imports it, Gurdal.

He keeps a quarter-loaf in the freezer at his home, another in his vacation home, and yet another one at work.

He never wants to be without it. But Gurdal's connection to Poilane goes far beyond flavor. Years ago, he was travelling through France with his wife. While in Paris, they met the owner of Poilane at the time, a man named Lionel Poilane, a celebrity of sorts in the baking-mad city.

“We hit it off,” he says. “They really liked us. And then the guy says, ‘Look, I have property in Normandy this weekend. I have a private helicopter. We're going to fly there. Do you guys want to come with us?’ Fortunately and unfortunately we said. ‘No. We can't, as tempting as it is.’ And then the next day they crashed.”

Lionel and his wife, Iréna, died in the crash. The news stunned the food world. This all happened back in 2002, but you can telltalking to Gurdal he's still processing it.

There are only a couple times in life when a chance decision extends your shelf-life. And that might explain this whole overnight bread thing.

Gurdal doesn't make much money off the loaves. So it feels more like a chance to pay it forward. You know, honor the kindness and warmth the Poilanes once extended to him, by making their incredible product available to his customers.

And to anyone else interested in bread. People like me. Gurdal wouldn't let me leave without it. He fished some of his personal stash out of the basement refrigerator in his shop. He wouldn't accept payment. He seemed offended that I even offered. He then gave me specific instructions for how to thaw, slice and toast it. And so that's the long version of how the best bread in Paris ended up in my kitchen.

It was a gift.

And as I removed it from the toaster I remembered a quote about why the Poilane family likes making things with dough — it’s because they disappear.