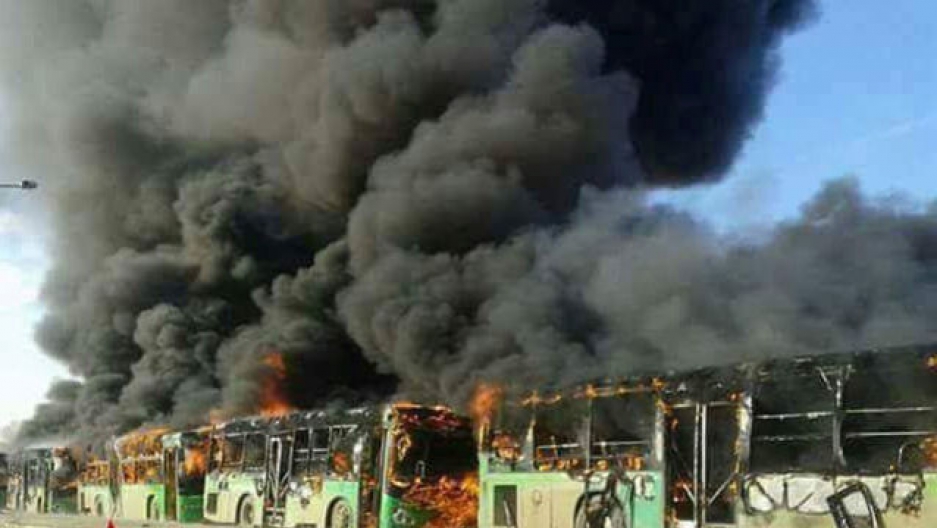 Syria's official media says buses were attacked and burned in the Idlib province while en route to evacuate ill and injured people from the besieged Syrian villages of al-Foua and Kefraya. This photo was provided by the official news outlet SANA on Dec. 18.

Gunmen attacked buses sent to evacuate people from two pro-regime villages in northwest Syria on Sunday but a senior military source said the incident should not disrupt parallel evacuations from Aleppo.

Thousands of people were to leave the last rebel-held parts of the northern city of Aleppo in exchange for residents leaving Fuaa and Kafraya, Shiite villages, in the neighboring province of Idlib.

But two dozen armed men attacked buses on their way to the villages under rebel siege, an AFP reporter said.

They made the drivers get out, opened fire on the vehicles and set fire to the fuel tanks of at least 20 buses, the reporter said.

The attack came after five other buses had entered the villages.

The identity of the attackers was not immediately clear, but the Syrian Observatory for Human Rights said two member groups of a coalition of Islamist rebels controlling most of Idlib had disagreed over the evacuations.

Fateh al-Sham Front, which was formerly known as the al-Nusra Front before renouncing ties with al-Qaeda, disagreed with Ahrar al-Sham over the deal, the monitoring group said.

But the military source said the attack should not affect any of the evacuation operations.

"There's collective will for the deal to stay in place. There must be solutions for all obstacles," the source said.

Dozens of buses on Sunday began entering the last rebel-held parts of east Aleppo to resume the evacuation of thousands of increasingly desperate trapped civilians and rebels.

The operation was suspended on Friday, a day after convoys of evacuees had begun leaving the rebel sector under a deal allowing the regime to take full control of the battleground city.

In mid-November, forces loyal to President Bashar al-Assad launched a blistering offensive to seize all of Aleppo, where rebel areas have been besieged by regime forces since July.

A senior Iranian official on Sunday complained of bias in attitudes towards civilians in east Aleppo and those of the two Shiite villages.

"While the Western-Hebrew-Arabic media have united to spread false information on the human losses in Aleppo, they remain silent on the need to evacuate the wounded and elderly from Fuaa and Kafraya," said Ali Shamkhani, secretary of Iran's Supreme National Security Council.