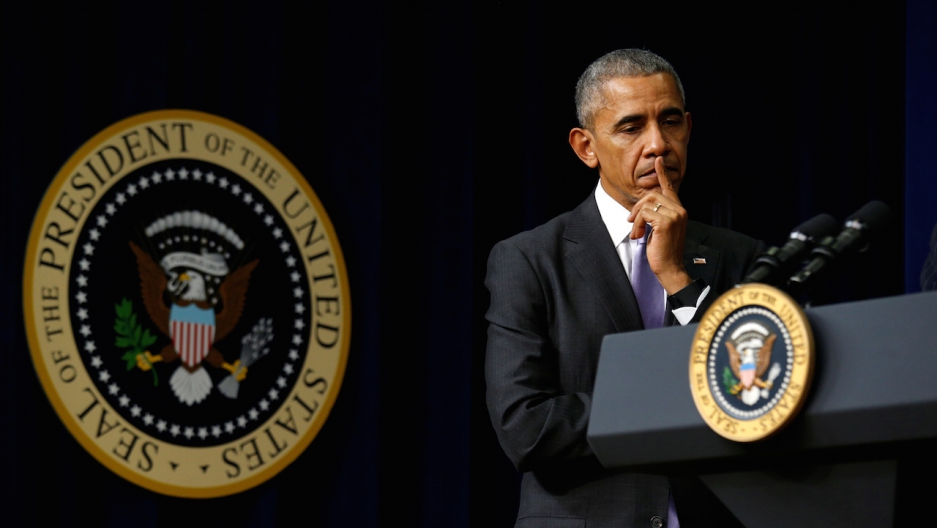 US President Barack Obama listens to remarks during a signing ceremony for the 21st Century Cures Act at the White House in Washington, DC, Dec. 13, 2016.

President Barack Obama, who has vowed to retaliate against Moscow over its election cyber-meddling, faced the media Friday as tensions soared with Russia's Vladimir Putin, whose Syria strategy has left Washington on the back foot.

Just hours before he headed to Hawaii with his family for his last Christmas as president, Obama held his traditional year-end press conference at 2:15 pm (1915 GMT).

Watch it in full here, starting at minute 49:

It was closely watched by his elected successor Donald Trump, who has pledged closer ties with the Kremlin.

"I think there is no doubt that when any foreign government tries to impact the integrity of our elections that we need to take action," Obama told NPR radio before the press confernence.

"And we will, at a time and place of our own choosing," he added, remaining vague about the nature of the retaliation, which could take multiple forms, some straightforward and others more subtle.

Slapping sanctions on Putin's inner circle would put Trump, the 70-year-old Republican president-in-waiting, in a difficult position once in office: repealing the sanctions would spark accusations of being too cozy with Moscow, a stated policy shift that has alarmed some in his own Republican Party.

Just five weeks before he leaves the White House, the outgoing Obama — who has a somewhat limited margin for action — is purposefully looking to raise the stakes over Russian election hacking, which US intelligence says was designed to help Trump defeat Democrat Hillary Clinton, a Putin critic.

Of course, how much that hacking may have helped Trump, or hurt Clinton, is impossible to gauge.

Several observers believe that Moscow was first trying to erode the confidence of Americans that the November 8 election was fair and legitimate.

Moscow has virulently denied the US accusations.

"At this point they need to either stop talking about this or finally present some sort of proof. Otherwise this looks extremely scurrilous," Putin's spokesman Dmitry Peskov told journalists during a visit by Putin to Japan.

While Obama did not mention Putin by name in his interview with NPR, one of his top advisors, Ben Rhodes, said Thursday: "I don't think things happen in the Russian government of this consequence without Vladimir Putin knowing about it."

FBI role up for debate

Trump rejects the intelligence community's assessment made public on Oct. 7 about Russia vote interference and qualified as "ridiculous" a secret CIA evaluation unveiled by The Washington Post that the hacking was done specifically to help Trump win.

He will soon be in charge of these same agencies.

Pointing the finger at the Russian president over meddling in the election puts the White House on a collision course with Trump, who has become increasingly isolated on the issue, even among Republicans.

The Republican president-elect has often praised Putin's leadership abilities, and has insinuated that the Obama administration is playing party politics by accusing Russia of orchestrating the hacks of Democratic Party emails that appeared to have slowed the momentum of Clinton's campaign.

"If Russia, or some other entity, was hacking, why did the White House wait so long to act? Why did they only complain after Hillary lost?" Trump tweeted on Thursday.

Obama has recalled that the first intelligence assessment came "a month before the election — this was not a secret."

"We determined and announced in October that it was the consensus of all the intelligence agencies and law enforcement that organizations affiliated with Russian intelligence were responsible for the hacking of the DNC, materials that were being leaked," he said Monday.

Former CIA director Michael Hayden called Trump "the only prominent American that has not yet conceded that the Russians conducted a massive covert influence campaign against the United States."

Clinton campaign chief John Podesta, who saw thousands of his emails hacked and leaked by WikiLeaks just weeks before the election, on Friday slammed what he called mismanagement at the heart of the Federal Bureau of Investigation.

Podesta drew a contrast between what he called the FBI's "massive response" to Clinton's use of a private email server as secretary of state, and its "seemingly lackadaisical response" to Russian hacking.

"Congress should more vigorously exercise its oversight to determine why the FBI responded overzealously in the Clinton case and insufficiently in the Russian case," he wrote in a commentary published in The Washington Post.

"The election is over and the damage is done, but the threat from Russia and other potential aggressors remains urgent and demands a serious and sustained response."