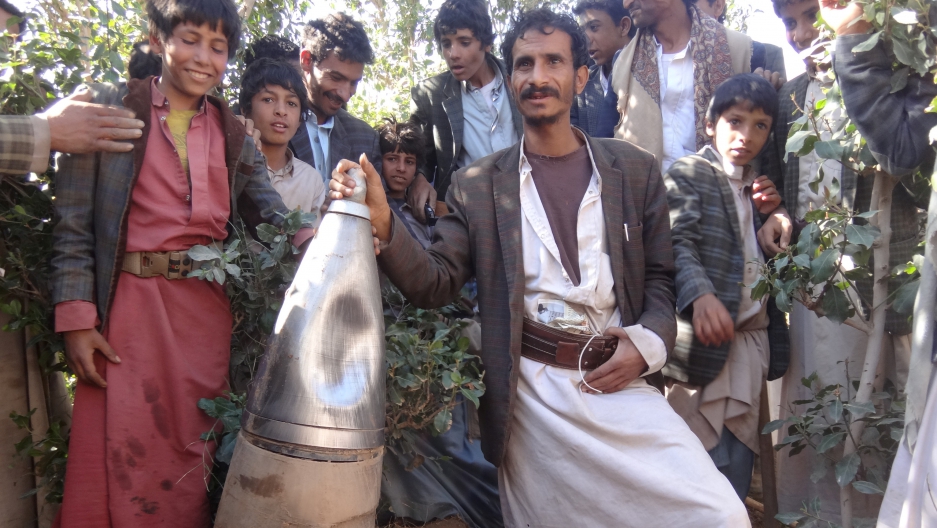 Yemenis pose for a picture next to a part of a missile they say was dropped during a Saudi-led air strike near the northwestern city of Saada, Yemen.

The United States made it harder last week for Saudi Arabia to drop bombs on the people of Yemen. But it also made it easier.

President Barack Obama signaled his concern about civilian casualties in the Yemen war on December 13, when he halted a major resupply of smart bombs to the Saudi Arabian air force.

Experts say the move could put Saudi Arabia in a serious bind when it comes to acquiring the munitions it needs to carry out its controversial air campaign in Yemen.

But observers have been quick to temper optimism about the move. People in Yemen barely noticed. After all, the bombing there has not stopped. And the same day the United States announced it was halting the weapons shipment, the US Air Force delivered the Saudis four new fighter jets — aircraft designed to launch the same precision-guided munitions that the Obama administration had just withheld.

In the past few months, the Saudi-led coalition has struck a number of civilian targets in Yemen, in the course of its US-backed military operation against Houthi rebels and forces loyal to former Yemeni President Ali Abdullah Saleh.

In August, 11 people were killed and 19 more injured when a hospital operated by Médecins Sans Frontières was bombed in northern Yemen. In September, 30 civilians were killed when a coalition plane attacked a neighborhood in the Red Sea port city of Hodeidah.

And in October, at the Grand Hall in the Yemeni capital, Sanaa, Saudi jets hit a funeral gathering, killing 140 people and injuring 500 more. While bodies were being removed from the scene, one Yemeni police officer snapped this photo of a shard from a US-made bomb.

It was not the first time a US weapon caused civilian casualties in Yemen. Human Rights Watch has documented more that 20 cases where American weapons were used in unlawful airstrikes there.

Read more: With US help, Saudi Arabia is obliterating Yemen

Under the Obama administration, the United States has offered the Saudis $115 billion in planes, bombs, missiles and support services. That includes the strap-on guided munition kits that convert the traditional "dumb bombs," in use for the past century, into "smart bombs" — high-tech weapons which, dropped from a passing plane, can independently zero in on a target through laser, radio and radar guidance.

Saudi Arabia is by far the largest customer for the US defense industry, and as a condition of every foreign military sale, the US State Department monitors how the Saudis use US-made weapons. Lately, it has reminded the Riyadh government that American military support does not amount to "a blank check."

But until the president's December 13 announcement, the warnings had appeared toothless.

The humanitarian relief organization Oxfam, which provides food and other basics to a million people inside Yemen, called the White House announcement a step in the right direction. Airstrikes and ground fighting have limited Oxfam's ability to deliver aid inside the country and have put its staff at great risk.

"We've been pushing the international community, and in particular the US and the UK, to really put all of its weight behind a peace agreement and behind the protection of civilians," says Scott Paul of Oxfam America. "And to do that, it's really been necessary to send a signal to the principal parties to the conflict that this kind of behavior won't be tolerated."

A State Department official confirmed that the administration is getting serious about Saudi conduct in the war.

"We continue to have concerns about the conflict in Yemen and how it has been waged, most especially the air campaign," the official said in an email. "Our ongoing policy review reflects our continued, strong concerns with the flaws in the Coalition’s targeting practices and overall prosecution of the air campaign in Yemen."

"We are also exploring how to refocus training for the Saudi air force to address these kinds of issues," the official added.

The same official also noted that the administration's decision to halt the shipment of smart bombs does not mean the US is scaling back other kinds of support for the Saudi operation in Yemen. The Department of Defense, following the White House announcement, said that the US has not stopped giving logistical support to the Saudi-led coalition and continues to provide intelligence to the Saudis who plan the bombing runs. US pilots are still flying tanker planes in the Gulf region to keep Saudi fighter jets airborne and at the ready.

On Dec. 18, US Secretary of State John Kerry was in Riyadh, where he held a joint press conference with Saudi Arabia's Foreign Minister, Adel Al-Jubeir. Jubeir raised doubts about reports that the United States was holding back a batch of smart bombs.

Several press outlets have quoted Jubeir saying, "The kingdom has received nothing official from the American government in this regard. This news that has been leaked contradicts reality." Secretary Kerry did not address the smart bombs deal directly, but he seemed to be suggesting that the weapons sale could still be on. 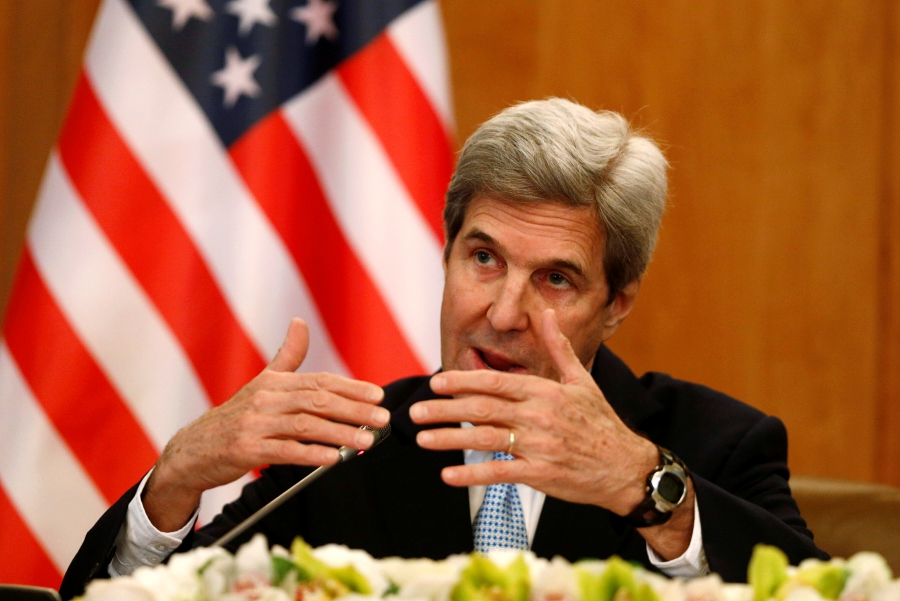 US Secretary of State John Kerry gestures during a news conference in Riyadh, Saudi Arabia December 18, 2016.

"Unfortunately," Kerry said, "sometimes the procurement process, as it’s known, by which weapons sales are made can be much lengthier than I like or certainly than the buying country likes, and I wish we could find a way to really accelerate it and speed it up more."

We asked a State Department official on Monday to restate the US position. “We continue to have concerns about the conflict in Yemen and how it has been waged, most especially the air campaign," the official said. "Consequently, we have decided to not move forward with final approval on some sales of munitions.”

In Yemen, where airstrikes continue unabated, a hold on the sale of 16,000 Raytheon guided bomb kits seems almost irrelevant.

Any idea how many were delivered before cancelation? Raining bombs here & kinda curious if will be out before leveling city. #Yemen https://t.co/lzvFaZxmED

It's hard to know what kind of effect the hold on the sale will have. No one but the Saudis, and possibly the US Department of Defense, knows for sure how many smart bombs the Saudis still have on hand.

But by withholding smart bomb kits, says Wezeman, the US is putting its Saudi allies in a bind.

"The options for Saudi Arabia in the short term are quite limited," he says, meaning that without a resupply, the Saudis could run short of the guided weapons they need to hit targets in Yemen. "They could," he says, "try to get them in the UK, but the UK only supplies bombs which contain US technology, so for that they would first need US permission, which obviously then they wouldn't get."

"They could go to France," Wezeman adds, "but then they would have to adapt the French models to the British and American platforms — the aircraft which the Saudis use — but that will take time if at all being possible."

Wezeman says other options for the Saudi air force, such as buying smart bombs from Israel ("Out of the question") or from Russia or China ("The US would never allow it") mean that Saudi Arabia's ability "to buy similar bombs elsewhere, especially in the short term, are very limited."

"The most important thing that could happen right now," he says, "is for the international community, and specifically the US and the UK, to signal to Saudi Arabia and the government of Yemen that the conflict cannot continue, and this has been a very important first step."

Paul, like many in the humanitarian community, has been frustrated with Washington's inability to persuade the Saudis to stop killing Yemeni civilians.

"The US has been trying to say that now for over a year, but the message hasn't been heard," he says. "And now the message hopefully will be heard. And Secretary [John] Kerry can resume some of the really noble efforts he has taken on to try to broker an agreement."

SIPRI's Wezeman suggests that optimism may be premature.

He points out that on the same day the White House signaled its displeasure with the Saudis by halting the sale of smart bombs, four brand-new Boeing F-15SA fighter jets were delivered by the US Air Force to Saudi Arabia.

"These aircraft are optimized to drop these same precision-guided munitions that Washington has put on hold," Wezeman says.

There are 150 more Boeing F-15SA fighters in the pipeline.

On Jan. 20, a new president could choose to deliver smart bombs to go with the planes.

NOTE: This story was updated Monday, December 19 to incorporate news from a press conference in Riyadh and an official statement from a State Department official in Washington, DC.