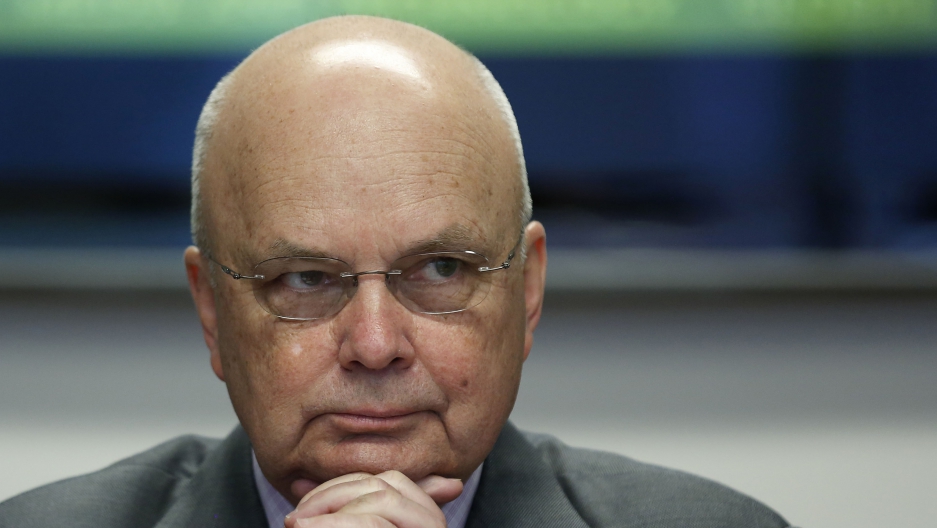 Former director of the NSA and CIA, Michael Hayden, at a cyber security conference in 2014

President Barack Obama says the US will retaliate against Russia for allegedly hacking and trying to influence the US election. But President-elect Donald Trump refuses to acknowledge the intelligence assessment that Putin’s Russia did anything of the kind.

The former head of the Central Intelligence Agency and the National Security Agency, Michael Hayden, told PRI’s The World that Trump and his team need to realize this is not about them.

“This is not about their legitimacy,” he says. “They got that. He’s going to be president, and that’s fine. That’s the way it is. It’s not about them.”

“It’s about us,” Hayden emphasizes. “It’s about our democratic processes. And we want to go about defending those processes by finding out exactly what happened and staring truth squarely in the face.”

“He just needs to get over the fact that some people on the fringe might use this to challenge his legitimacy, which the center of the country is not doing.”

Hayden is the only man ever to head both the NSA (1999-2005) and the CIA (2006-2009). He’s also a former four-star general in the Air Force. He was one of 50 senior national security officials who served in Republican administrations to sign an open letter earlier this year to say that Trump was not qualified to be president.

In an opinion piece in the Washington Post, just before the election, Hayden called Trump “Russia’s useful fool.” He says he came to that conclusion after analyzing what the Trump campaign had said and not said. The “polezni durak” or “useful idiot” was a concept from Soviet times, Hayden writes, some naïve soul who’s “manipulated by Moscow, secretly held in contempt, but whose blind support is happily accepted and exploited.”

“Since I wrote that five weeks ago,” Hayden told PRI’s The World, “the [Trump] campaign has still refused to utter any criticism of Vladimir Putin, and then reject[ed] the high confidence judgement of a pretty good intelligence community. So, if anything, that’s been reinforced.”

“I’m trying to be both respectful and understanding here, but my 'polezni durak' — useful fool, useful idiot — description, as I said at the end of my article, is actually the most benign explanation I can come up with.”

In terms of Russia’s motives, Hayden says “if their objective was to mess with our heads, this has got to be the most successful covert influence campaign in history.”

“I mean did they really expect that the president-elect of the United States would be condemning, criticizing, or at a minimum refusing to accept the high-confidence judgement of his intelligence community, 35 days before he enters office. That is amazingly disruptive.”

Hayden says he himself has high confidence in the intelligence assessment. “I don’t go back for briefings, but I do read what is publicly available and I know the words that are used, when they’re used, and what the people still in government mean. And when good senior public officials attach their reputations to a phrase like ‘we have high confidence that the Russian Federation did all those things that we’ve listed,’ I take away from it a high confidence that that is indeed the truth.”

Hayden has a bigger worry, though, than the allegations of Russian meddling in the election, and that’s the fear that Trump will continue to refuse to accept the assessments of the intelligence community.

Trump is taking only one intelligence briefing a week, while both Obama and Georg W. Bush took briefings daily.

Vice President-elect Mike Pence is receiving briefings six days a week, according to sources cited by Reuters. Hayden suggests Pence could act as a filter for the president in the same way Zbigniew Brzezinski did as national security adviser for Jimmy Carter.

Overall, Hayden says he is concerned about the next four years, “but I also know my country has very strong institutions.”

“I also know that the president-elect was elected by the American people. Sovereignty matters. He deserves a chance to govern.”