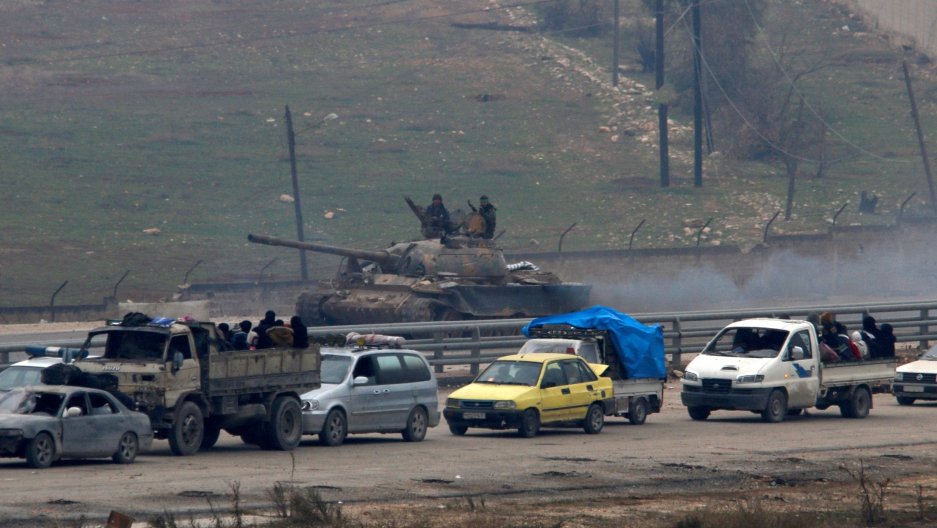 Forces loyal to Syria's President Bashar al-Assad sit on a tank as a convoy of buses and other vehicles bringing people out of eastern Aleppo turns back in the direction of the besieged rebel enclave, December 16, 2016.

The battle for Aleppo seems all but decided, but Syria's long and bloody civil war marches forward.

As the city burns, tens of thousands of civilians and those opposed to the military are being evacuated as government forces retake Aleppo. Though this nation has been held hostage by civil war, the attention span of the West has ebbed and flowed according to political priorities of the moment.

Many in the United States and Europe watched the crisis with delusions of democracy when anti-regime protests bubbled up in the southern city of Deraa in March 2011. Nearly six years later, those that once were paying attention seem to have lost interest. Any inclination that opposition forces might successfully topple the government of President Bashar al-Assad have been foregone.

Basel Marshall feels that acutely. This 24-year-old fled what has since become the ISIS stronghold city of Raqqa, and now lives in Bergheim, Germany. Marshall is a rapper and his lyrics tell the story of the struggle to survive.

As this war goes on, he's feeling more and more hopeless, like no one in the world is hearing his call for help.

According to the United Nations Office for the Coordination of Humanitarian Affairs, 13.5 million people are in need in Syria, and more than a quarter of a million people have been killed since the conflict began. In viewing the destruction, Marshall believes the outside world does not value Syrian lives.

“As you can see, Paris or Charlie Hebdo or Brussels, things happened [there], and the whole world got crazy about it,” he says. “I mean why? We're not humans? It's only because we're Syrians it's OK that we die? But for those people, no, we have to support them and we have to pray for Paris? We do, yeah, I was sad — I was very sad about what happened. But we're also humans and we also deserve some support.”

He continues: “It makes me feel like the world is looking at us like we're second quality humans. I have this anger against anyone who could help and didn't do anything, and it's against anyone who was part of this. Anyone who accepted this killing. Anyone who gave the greenlight to Bashar al-Assad to kill those people.”

It’s time for humanity to step up for the people of Syria, Marshall argues.

Marshall says he isn’t asking the world to come and fight in Syria, but for the international community to care.

“What I'm asking, and many Syrians are asking to all the civilians, American civilians or American politicians, have a little bit of humanity, because we didn't see anything of that humanity they're claiming they have,” says Marshall. “We just want them to take actions. Don't lose this chance, because believe me, if the regime got control in Syria, it's going to be very bad for the whole Middle East. ... It's going to be very bad for many other countries. We want from people just support us. Send help to Aleppo, do some demonstrations in America against this regime, do anything.”

Marshall believes that President-elect Donald Trump is “useless” and says the incoming commander-in-chief will do nothing to help Syrians. However, he is still appealing to American civilians.

“Do demonstrations, go out into the streets, ask politicians to do something to help Syrian people,” he says. “We don't want to die … We want to carry on in our lives.”

Check out Marshall's song about the conflict below.