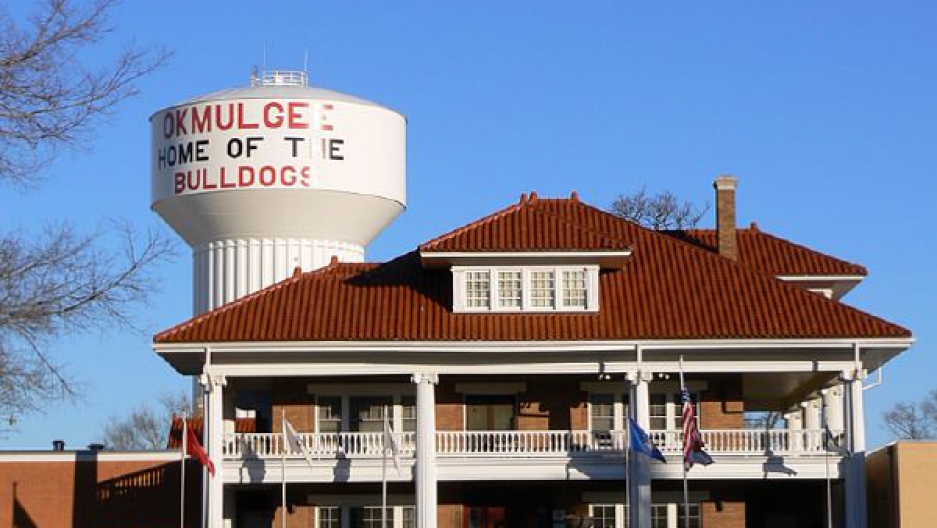 Okmulgee, Oklahoma, is home to the Miscogee Creek Nation headquarters.

On a rainy Wednesday afternoon, four American Indian teenagers are gathered in a nondescript building along rural Okmulgee, Oklahoma's main street. As the headquarters of the Muscogee Creek Nation, Okmulgee takes pride in its American Indian heritage.

Street signs in the downtown area are in both English and Muscogee languages and tribal insignia is seen throughout the community.

The four teenagers answer questions about the healthiest way to handle a situation when a partner feels pressured to have sex, before watching a film about a young woman confronting the news that she has gonorrhea.

“It’s good to be educated,” said Erin, a 16-year-old junior who enrolled in the class at her mom’s urging. “I wasn’t very educated on HIV and AIDS and how it can be transmitted.”

Erin said she and her friends talk openly about sex and give each other advice about how to handle situations.

“It’s a safe environment, and we’re real open to anything really,” said Jay, a 17-year-old high school junior, whose name is being withheld at his request because of his age and the subjects being discussed. The tribe requested that the last names of the youth not be used. “We come in here and ... they’re real open about almost anything because they want us to be protected and safe in everything we do.”

Jay’s public school doesn’t offer any sexual education, he says. And that’s a problem, according to some members of the Muscogee Creek Nation.

Oklahoma already holds the dubious distinction of being behind only to Arkansas in its population of teen parents. While some parents, organizations and educators want to combat this through education and contraception, the state’s religious forces have successfully opposed such a move.

The state does not require sex education in public schools; only an AIDS prevention class during seventh to ninth grades and one class for 10th to 12-graders, according to Steffie Corcoran, spokeswoman for the Oklahoma State Department of Education. In the public schools, more general sexual education can be taught, but because it’s not a requirement, the state Department of Education does not keep track of how many districts offer more comprehensive sex education, Corcoran added.

Meanwhile, earlier this year, the Oklahoma House overwhelmingly passed a bill that would provide funding to teach an “anti-abortion” class that teaches abortion “kills a living human being.” Language in that bill specifically prohibited using any of the funds for a curriculum on human sexuality.

Tribes like the Muscogee Creek Nation are taking matters into their own hands, and are now offering free, medically accurate sex education courses. The Creek course is open to both tribal members and non-tribal members, though only American Indians are enrolled so far.

The Creeks were considered one of the “five civilized tribes” relocated to Indian Territory, what's now Oklahoma, from the southeastern United States because of their apparent ease at assimilating into the culture of the European settlers, including adopting Christianity, intermarriage with whites, high literacy rates, patrilineal descent and slaveholding, according to the Oklahoma Historical Society.

Oklahoma, which is now home to nearly 40 federally recognized American Indian tribes and has a large Native American population, has only one tribe with a reservation. The majority of the tribes have jurisdictional areas that range from a portion of a county to a large swath of the state.

Though religion is still deeply intertwined in many of the tribes, they are “definitely more progressive,” said Nancy Mason, teacher and youth services director for the Muscogee Creek Nation, noting that the Muscogee Creek Nation and other tribes have offered behavioral health sex education classes to college-age populations before. Mason said she began thinking about creating such a class for youth when she attended a community baby shower and realized there was no push to prevent teen pregnancies.

“For me personally, there were at least five young ladies who were friends of my daughter who were at that event, so for me that just hit home even more,” she said.

So Mason and others held a community meeting and saw that there was support and they decided on three goals: implementing the curriculum in the schools within the tribe’s jurisdiction, educating providers and the community about contraception, and providing general information to the community.

Mason and another woman have since become trained in the evidence-based curriculum, which focuses on abstinence-only for middle schoolers and comprehensive sex education for high schoolers, which includes a condom demonstration and information on birth control. The curriculum does not discuss pregnancy termination, Mason noted.

“Overall, both of the curricula do focus on setting personal boundaries and making positive, healthy choices for yourself, so even though it emphasizes abstinence for the younger group, it’s still educating on HIV, STDs, how to negotiate in relationships and dealing with a partner who might be a bit more aggressive,” she said.

The tribal department has been working with local schools to recruit students for the course, which meets outside of school hours. Anyone can participate, Mason said, though currently all the youth involved are Native American.

The four teenagers, three girls and a boy, are divided into two teams, competing against each other in a game of AIDS basketball to see who can recall the most information from their previous sex education class. The team names they select seem to represent them well. One team picks beans/fry bread (fry bread is a popular American Indian dish) and the other chooses Thunder (Oklahoma City’s NBA team, about 100 miles away, is the Thunder.)

“What are two ways to lower your risk of HIV,” Mason asks.

In a few weeks, the teenagers, who are all in high school, will learn how to properly put a condom on as part of an eight-session course to educate teens about healthy sexual habits and prevent teen pregnancy.

There has been discussion with the Okmulgee Public Schools School Board about offering the curriculum within the schools as a class. They seem open to the idea, Mason said, but added that it can be very “scary” for some parents, administrators and even health providers. It can also be divisive. A superintendent at one public school within the tribe’s jurisdiction is ready to offer the curriculum, but the school board may not be.

“Just trying to maneuver all those waters is going to be the hardest part,” Mason added.

It’s difficult to say how many of the American Indian tribes in Oklahoma are offering comprehensive sex education. The Guttmacher Institute, a Washington-based sexual and reproductive health policy and research organization, hasn’t done much research into Native American tribes and sex education, according to Elizabeth Nash, senior state issues manager. However, she noted that the Choctaw Nation, headquartered in Durant, Oklahoma, is a recipient of a Department of Health & Human Services grant to prevent teen pregnancy.

The five-year project will target Native American youth in three counties under the tribe’s jurisdiction. A similar sex education program involving the White Mountain Apache tribe, based in Arizona, found that one year after taking part, the participants, who ranged in age from 13 to 19, had improved knowledge about HIV/AIDS and STDs; had more confidence in their ability to use condoms correctly and consistently; and had more conversations about sexual and reproductive health with their parents and other adults, according to the John Hopkins Center for American Indian Health.

And for those parents who question whether the course will teach their children how to have sex, Mason has a simple response:

“Obviously, no,” she said. “We’re teaching them not to, and that’s the first thing we always say is the number one way to prevent STDs and pregnancies is abstinence. But if you’re going to make that choice, make sure you use some type of protection.”

Kristi Eaton is a journalist with The Fuller Project for International Reporting.