There’s a noise and an odor to the cotton fields in summer. Yessy Bustos remembers it like this: "Dirt. The dirt. And then, the bugs."

Bustos comes from a family of pickers. She started when she was 8. "I would be picking and it’s so quiet, and then out of nowhere you just hear 'ZUM!'”

She says she got so afraid of insects, she’d have several panic attacks a day. So she started wearing headphones.

Bustos retired at the ripe old age of 21. Now, she advocates for farmworkers in North Carolina with an organization called NC Field, working out of a dilapidated white house by the fields. She’s a US citizen, but knows many pickers here are undocumented. She works to prevent exploitation, and the hiring of underage workers, like she once was.

Enforcement is up, but I still get an earful of stories about child pickers — people like Jose. He’s 18 now — but undocumented. He asks to be identified by his first name only, because of his status. His parents bought him from Mexico when he was a kid. His dad discouraged him from working in the fields. He wanted him to focus on school. 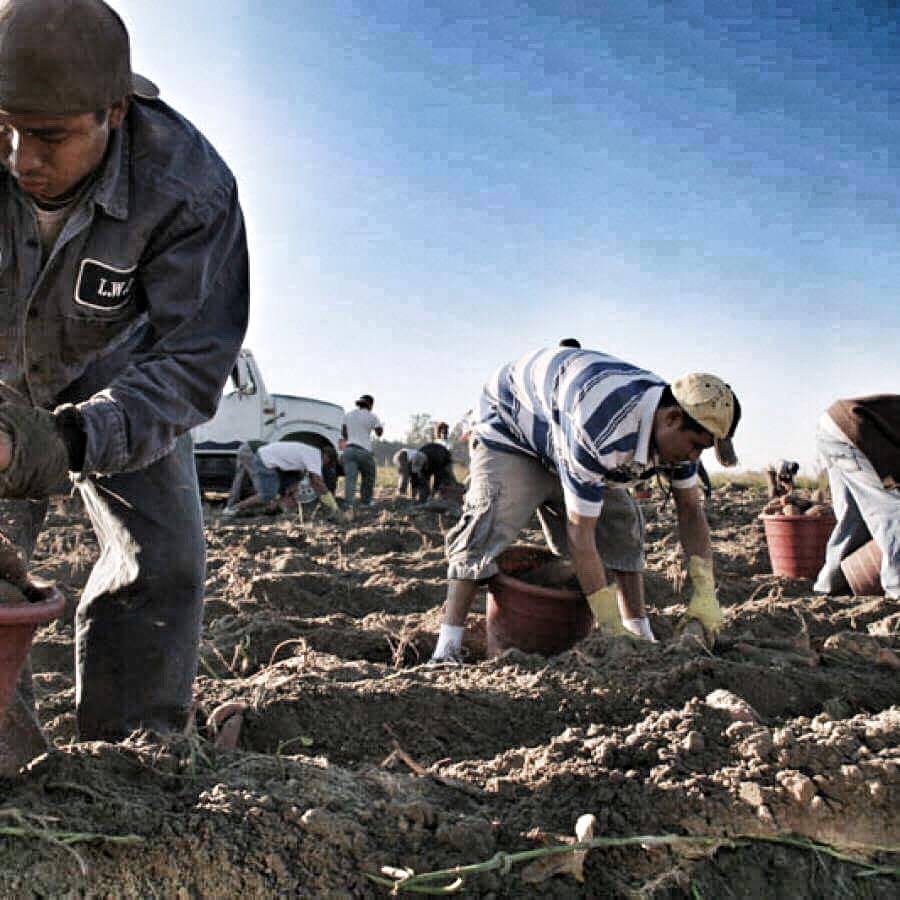 In a field in North Carolina, young men and boys pick yams.

In middle school, Jose remembers being really into biology — and getting teased for it. A lot.

He was a Mexican kid in the South, he says. Not everyone was welcoming. His classmates told him, he’d never go to college. "And that really got to me. And then I actually started thinking about it more. And I was like, well, I might end up doing something like working in the fields. And that’s when I gave working in the fields a try."

He was 14. He remembers that first day, the stickiness of the tobacco plants on his hands. "It was either nicotine or the amount of nicotine that was on the plant. And my dad would say, well grab some dirt and powder your hands. And then keep going. And I was like, alright. And that’s what we did. Just powdered our hands with dirt."

Things changed in 2012 when President Barack Obama created the Deferred Action for Childhood Arrivals program, often called DACA. It temporarily protects people like Jose — who came to the US as kids — from deportation. And lets them work, legally.

Related: In North Carolina, an immigrant church braces for the Trump administration

Jose says it changed his life. He never went back to the fields. He got legal work, at a restaurant.

But now he’s nervous. So are the 740,000 other immigrants like him who have DACA. On the campaign trail, President-elect Donald Trump said he would scrap DACA. But, this month Trump said he’ll “work something out” for people in the program.

Jose says, "I am a little worried. ... I guess I actually am pretty worried."

He just graduated from high school and wants to study computer engineering at North Carolina State. DACA lets him not worry about deportation. Without it, Jose says, the idea of going underground comes back, along with the possiblity of returning to the fields. "It’s just a thought that I really dont want to think about. It kind of lingers from time to time. I don’t know what I want to do."

I say goodbye to Jose — and to Yessy Bustos — and head to the fields. It’s getting dark and I drive on a dirt road along a plantation. There are trailer homes, too, and when I stop by one and knock on the door, I’m invited in for dinner. Tacos — tongue, pork, beef. We eat and talk about soccer.

Afterwards, the kids go play — they’re all US citizens. The parents are undocumented. Elena has been here for about 20 years. Since the election, she’s unsure what’s next. "Everyone thought the same thing," she says. "What are we going to do now? We’re all waiting for January now."

There’s nervous laughter and they all say, maybe nothing will happen. But that’s not necessarily a good thing. Without change — with no push to offer families like these legal status — also means they’ll keep working in harsh conditions for extremely low pay. At the same, they say, who will do the work they do?

"Working in the tobacco fields, when it’s hot ... it can be over 100 degrees," Elena says. "And the plants — they cover you completely. Sometimes you have to get out of the bush to breath. And I’ve never seen an American out there. It’s just us Hispanics — always Hispanics. If you take us out, let’s see who else wants to work those fields. Every single season, someone dies. Not everyone can do this you know."