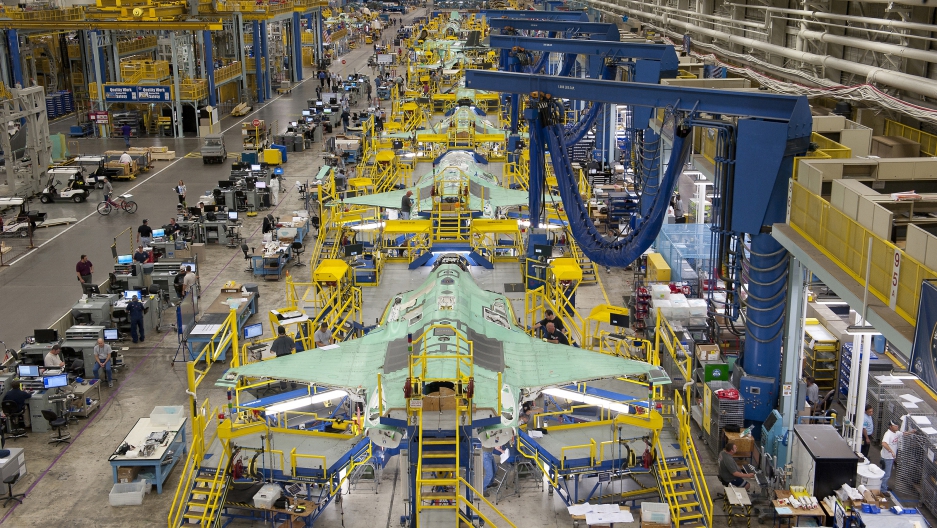 Workers can be seen on the moving line and forward fuselage assembly areas for the F-35 Joint Strike Fighter at Lockheed Martin's factory in Fort Worth, Texas.

President-elect Donald Trump told his 17.2 million Twitter followers on Monday that the cost of producing America's newest fighter jet, the F-35, is out of control. And he has a point.

Lockheed Martin's F-35 has been in the works for almost 20 years, but the company has only delivered about 180 jets so far. The whole project, which Lockheed calls the Joint Strike Fighter program, is very over budget.

"$130-billion-plus, from the original estimates that were made in the '90s," says Marcus Weisgerber, the global business editor for Defense One.

Weisgerber says, despite the cost overruns, the Pentagon has bet big on the F-35, and it's not about to change course.

"It doesn't have a backup plan," he says. "The program was envisioned, when it started, to replace planes in the Air Force and the Marine Corps and in the Navy. But the big thing with the F-35, aside from it being the only option now, is that it's a stealth plane, and there's no other stealth plane in production in the United States — meaning it can fly under the radar and can't be detected. Right now only Russia and China are building planes like this."

Weisgerber has toured the Lockheed plant in Fort Worth, Texas, where three versions of the F-35 are manufactured.

"Right in line you have these three different types of planes," he explains: "the type for the Air Force, which is kind of a traditional plane that could take off and land from regular runways; and you have a Marine version that lands vertically because the engine can move; and a Navy version that the wings fold up, so it can land on aircraft carriers."

Lockheed touts the plane's high-tech innovations. "The F-35's operating software, avionics, integrated electronic sensors, displays and communications systems ... collect and share data with the pilot and other friendly aircraft," company literature claims, "providing unmatched situational awareness at sea, in the air and on the ground."

But critics say the plane doesn't perform as well as the F-16 it's designed to replace. In fact, in test combat, the F-35 lost to an F-16.

Back in 2011 the Obama administration was pushing hard to get other countries to buy the F-35. Japan finally got its first F-35 in September. Israel received its first two on December 12 with US Secretary of Defense Ash Carter there to present them.

"There are about a dozen countries early on that are committing to this," Weisgerber says. Sales of the F-35 to foreign partners are part of the business plan that, eventually, should make the fighter more economical to produce.

"Think of it as the old Costco method," Weisgerber says. "If you buy in bulk, it drives the price down. So every country that buys this — every time the US military ups its order — it brings down the cost of the planes."

The F-35 program and cost is out of control. Billions of dollars can and will be saved on military (and other) purchases after January 20th.

Lockheed's stock value took a dive after Trump's tweet, and many wondered what the president-elect was trying to accomplish.

"If you cancel a program like this, it's no doubt going to have a job impact," Weisgerber says. "President-elect Trump is probably not going to want to kill a program that employs so many people."

Weisgerber thinks this could be Trump's way of opening negotiations about the F-35.

"He wants to lower the price of the plane," Weisgerber says. "And he's got to either increase the buy — that'll get it down — or cut into Lockheed's profit."

Weisgerber says that single tweet has put the whole defense industry on edge.

"Contractors and defense companies are really, really preparing for this to be the new way of negotiation," he says, "that the president himself, in an unprecedented fashion, is going to start to actually negotiate contracts on a year-by-year basis."

As Weisgerber noted in his article for Defense One, "The Pentagon is already negotiating its next batch of about 100 F-35s, a deal that could be worth upwards of $7 billion. If a deal is not reached before January 20, it could become the first real test of President Trump’s skills as negotiator in chief."