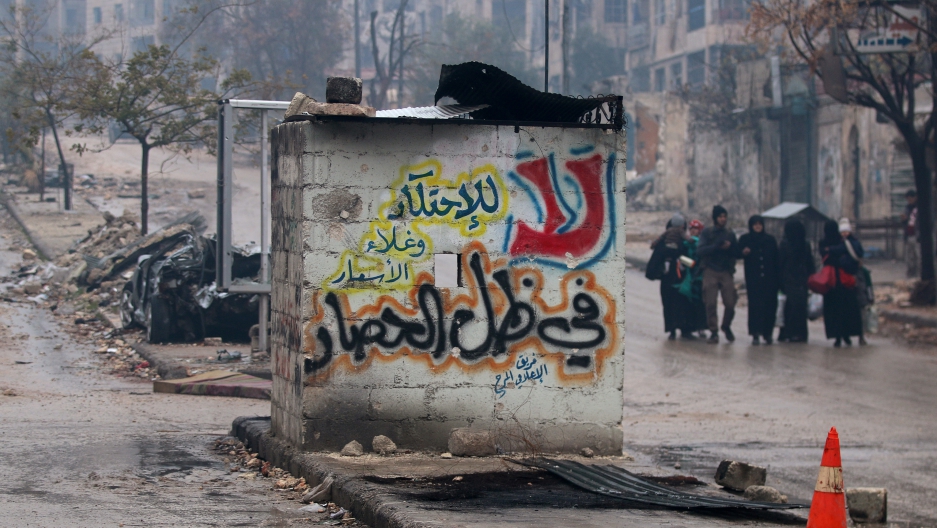 People carry their belongings as they flee deeper into the remaining rebel-held areas of Aleppo, Syria, on Dec. 13, 2016.

White Helmet volunteer Ismail Alabdullah says the city of Aleppo is like a mother to him, and until an evacuation was announced on Dec. 13, he never thought he would leave it.

"From the very beginning of the uprising, my hope and my dream [was] to see the victory of our revolution here in my city," Alabdullah said Tuesday afternoon, after rebel officials, Russia and Turkey confirmed a ceasefire agreement that requires the evacuation of civilians and fighters in eastern Aleppo.

If implemented, the ceasefire would mark a major victory for President Bashar al-Assad over opposition forces who rose up against him in 2011.

Increasingly desperate pleas from civilians in east Aleppo as ceasefire and evacuation plan breaks down. pic.twitter.com/c3AWEWKDY9

"When I heard the news, first I was happy a little bit," Alabdullah says, "but after that I cried. Thinking about leaving my city makes my blood run cold. I’m really, really desperate now, you know? But we don’t have any choice."

As a White Helmet, Alabdullah has saved the lives of many people, but says it doesn't provide him any consolation that he's been able to help people throughout the tragedy.

Alabdullah says he doesn't necessarily trust the evacuation will be safe — he's suspicious of interference from Syrian President Bashar al-Assad, calling his forces "monsters" and "mercenaries."

David Miliband, head of the International Rescue Committee and a former British foreign secretary, describes events in Aleppo as an assault on the very notion of international humanitarian law.

"It's not alarmist to say that the fate of not just the future of Aleppo, but of civilians in warfare elsewhere in the world, hangs in the balance today," Miliband says.

Eight IRC hospitals in Syria were bombed in 2016, and Miliband wants to know who ordered those attacks.

"I want the names of the people," he says. "We know that it's either Russian or Syrian air forces that have bombed our hospitals along with other people's hospitals."

But Miliband doesn't leave other international players off the hook. He says the US, Turkey, Iran and Saudi Arabia all failed to seize opportunities to bring Syria's war to an end. And that failure has had ripple effects around the world, including sparking an international refugee crisis that Miliband calls "a global catastrophe."

Resigned, Alabdullah prepared to board the green buses that will take evacuees to opposition-held territory to the west of the city.

"[A] big massacre will happen if we stay," he says. "A lot of people will die — as [of] yesterday, 82 people were executed by Assad’s forces, and we know if all the Aleppo city falls in the hands of this butcher, they will kill everyone who will say no to them. That’s why we need to avoid this massacre. We need to save our kids, our friends, our people. We have no choice."

The United Nations said it had received credible reports of at least 82 civilians, including 11 women and 13 children, being executed by pro-government forces in Aleppo in recent days.

With the fall of Aleppo, Miliband sees possibility in the final weeks of the Obama administration.

"We've got five weeks to save lives," he says, "and frankly, the scale of the killing over the last few days suggests that there are thousands of lives at stake, even before a Trump administration takes effect."

Miliband says he'd like to see US President-elect Donald Trump and President Barack Obama jointly calling for a "proper ceasefire" and investigations into human rights abuses in Syria.

"Because I think that would send a message that the change of administration isn't going to lead to a relapse in American commitment to upholding international humanitarian law," he says.

In Aleppo, Alabdullah says the fighting had stopped as of Tuesday afternoon.

"It’s the end for this — for Aleppo city — but it’s not the end for our revolution," he says. "We can go on in another place to complete our revolution. In Aleppo, we failed. They killed us, they destroyed the city, and they did everything to make us surrender [and] give up."