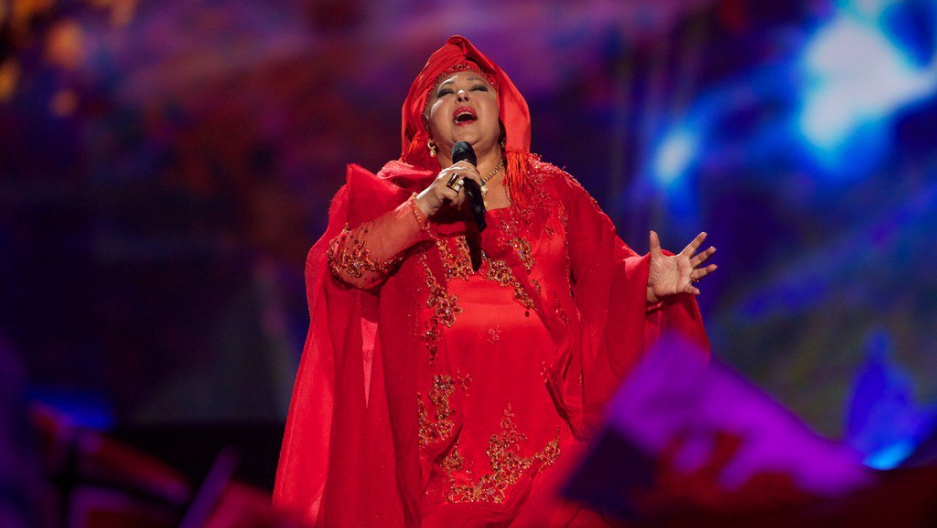 Esma Redžepova representing Macedonia with the song "Pred da se razdeni"  during a dress rehearsal for the Eurovision Song Contest 2013 in Malmö.

Esma Redžepova, the prominent and versatile Roma singer dubbed the "Romany music queen," has died at the age of 73, hospital sources and her family said Sunday.

Listen to an interview with the queen

The "Queen of Romany song" Esma Redžepova spoke to The World in 2011. Listen to that interview here.

The singer from Macedonia was one of the first vocalists in the Balkans to sing in the Romany language in some of the world's greatest music halls during her long career.

From a young age, Redžepova drew on traditional Roma and Macedonian music for inspiration. Her extravagant outfits, big gold earrings and powerful voice were a fixture on world stages for almost five decades.

The "Gypsy queen" was also a committed humanitarian. She and her husband adopted 47 Roma children and helped them get an education. And for eight years, she served on the city council in her hometown of Skopje, Macedonia, where she spoke out against prejudice and stood up for the emancipation of Roma women.

People have been mourning the singer on social media, including Jess Baily, the US ambassador to the Republic of Macedonia, who said on Twitter: "Esma Redžepova touched lives around the world, including many Americans. She will be missed. #RIPesma."

Redžepova's music was her lasting gift. In a previous interview with The World, she said: "I have been composing since I was 9 years old, when I made 'Chaje Shukarije,' the most famous Romany song in the world. There is no wedding or joyful occasion anywhere in the Balkans where they do not sing it. Many musicians from all over the world want to record cover versions."

"Chaje Shukarija" traslates as "Beautiful Girl" in the Romany language, and the lyrics tell a timeless story of unrequited love.

Known for her extravagant outfits and perfectly controlled, powerful voice, she had a rich repertoire of hundreds of songs.

She mixed traditional music with contemporary sound, including pop and electronic music, working closely with young artists across the Balkans.

She represented Macedonia at the 2013 Eurovision contest, and in June this year she performed before a packed hall in Belgrade accompanied by the Bosnian group Mostar Sevdah Reunion.

Redžepova also told The World that she hoped the Balkans would become better known for the “beauty of its music than for the bitterness of its wars.”