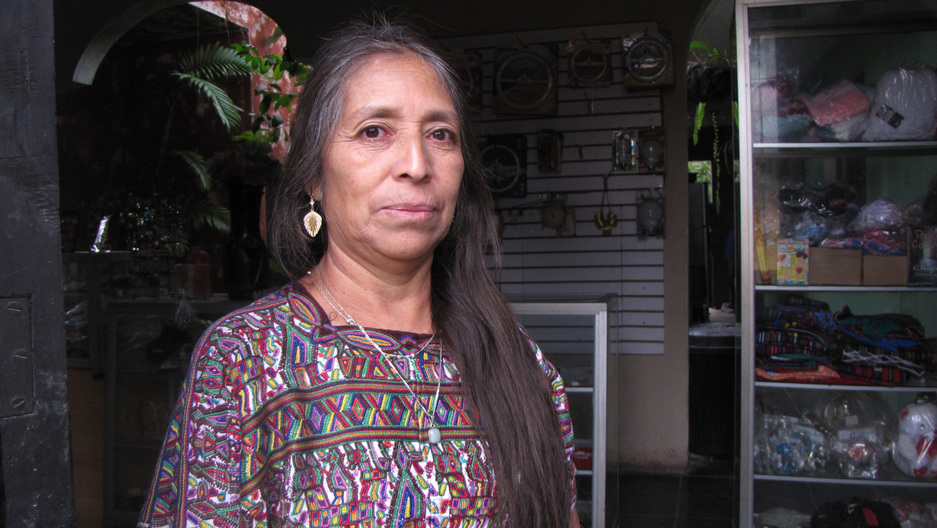 Feliciana Bernal is shown here in her store in Nebaj, Guatemala.

This month marks two decades since the signing of the Guatemalan peace accords, which ended a 36-year-old civil war.

Some 200,000 people were killed in that war, many more tortured and raped. In recent years, the country has been reckoning with those atrocities and trying to prosecute perpetrators of war crimes.

Justice has been slow, but Guatemalans still see a victory in just having the trials take place not least because of the way women have come forward to tell their stories — especially indigenous women.

In her store in Nebaj, in the Guatemalan highlands, Feliciana Bernal surrounds herself these days with colorful woven scarves and clothing.

She is petite, and smiling, and it might surprise you that she’s always been a fighter.

Bernal walks with a limp, and when she was a child, her parents saw her disability as reason to keep her home from school. She fought to convince them otherwise. She excelled, and eventually worked to promote bilingual education in a system where her fellow Maya Ixil speakers were too often left behind.

She fought in the courts to stop men from taking over her women’s organization, and she fought to keep teaching when the war came, and the military targeted people like her.

But she continued on to school to teach. When she got home later that day, she told her husband about the terrible scene. He too, was an educator, and had also seen horrors.

“And I looked at him, sitting where you’re sitting now,” she says, “and I said that maybe they would kill him, and that that’s how they would do it. … Or at least that’s what I was saying in my head.”

It was a foreshadowing. Bernal’s husband was kidnapped and tortured. He survived, but she says his death years later was due to the beatings, which had broken his spine.

Most of that was in the '70s and '80s, but it’s taken decades for many residents to talk about what happened and to seek justice.

Bernal says she’s long wanted to write about and teach about the war, “and people would say to me, ‘No, why remember everything that happened? It’s better to completely forget and start with the present.’”

Then, several years ago, something happened that Bernal says changed her life. A human rights group was helping build a case against perpetrators of genocide against the Maya Ixil people, and they asked Bernal to be an interpreter for speakers of the Ixil language.

The accused were General Efraín Ríos Montt, who was president of Guatemala in the early 1980s, and his military intelligence chief at the time, José Mauricio Rodriguez Sanchez.

Not only was the once rock-solid impunity at the highest levels of power in Guatemala beginning to crack. In a rare development for a domestic court anywhere in the world, sexual violence was an important part of the trial, as a central factor in the alleged genocide. 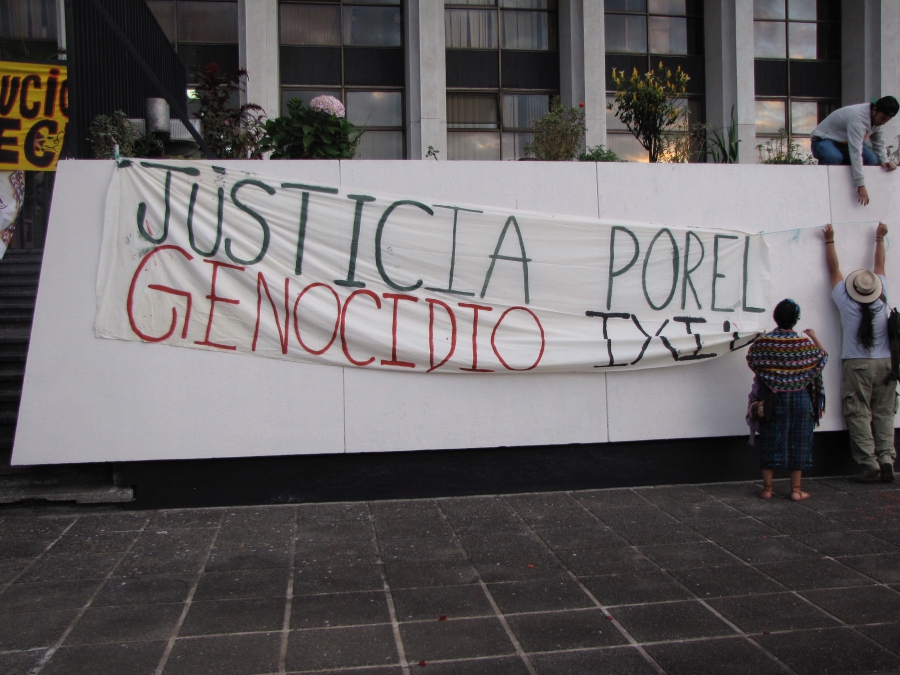 In 2013, Ríos Montt was found guilty of genocide and crimes against humanity. Rodriguez Sanchez was acquitted.

Before and during the trial, Bernal translated testimony, including the stories of several women who’d been victims of rape.

“There are plaintiffs who were raped by as many as 20 soldiers,” Bernal says, “and the poor women remain really badly hurt by this, but they never told anybody because they didn’t want their husbands to hear, or men to hear. … They would only speak in front [of] a woman interpreter and a woman lawyer, because they were afraid.”

Their names were withheld from the public, and their faces hidden by scarves during proceedings. But the fact that they were willing to speak at all, Bernal says, marked a big change.

“The change I’ve seen in women in the [genocide] case is they are motivated to speak,” Bernal says, “and not just in the case. … Not all, but more women have the courage to speak publicly.”

This is not just Bernal’s experience. Guatemala has seen a remarkable rise in the involvement of women at every level of the justice system.

In the trial of Sepur Zarco, named after a military outpost, 15 Q’eqchi Maya women testified about atrocities they had suffered in the '80s — including rape and slave labor, following the forced disappearance of their husbands. The defendants, a lieutenant and former military commissioner, were charged with ordering and directly participating in the crimes.

In the trial’s final days, the courthouse filled with a crowd that was overwhelmingly female — scholars, human rights activists and indigenous women in their distinctive traditional clothing. They had taken buses in from remote corners of the country. Some spoke no Spanish or Q’eqchi but were there to show support and bear witness, some recalling the horrors that they and their communities had also experienced in the darkest days of the war.

The defendants were each sentenced to more than 100 years in prison and ordered to pay tens of thousands of dollars to each victim.

“This case is historic because we are breaking the total impunity on sexual violence against women during the war,” said Luz Mendez, with the National Union of Guatemalan Women, which helped bring the Sepur Zarco case to trial. She was standing after the trial in the public square outside the courthouse, where celebratory music and dancing were getting going.

“But this group of women in Sepur Zarco is only a sample, a very, very little sample of what happened during the war to indigenous women,” she says.

As in so many high-stakes cases, this victory was not the end of the story. The Sepur Zarco and Rios Montt trials are dragging through retrial, appeals and other delays, but a momentum has gathered that advocates say will not be undone. Mendez says other sexual violence cases are in the works, and that since the Sepur Zarco ruling, many more victims have come forward to tell human rights organizations about what happened to them.

Prospects for a final resolution in the genocide case have been dimmed by reports that Rios Montt has dementia. Still, for Feliciana Bernal, the teacher-turned-interpreter, it’s all worth the fight.

“In spite of all that I’ve been through, I’m really happy because the case of Rios Montt and the genocide sheds light on what’s been told,” Bernal says. “That was a part of my life that has caused me pain, so I say it’s best that it all be aired.” 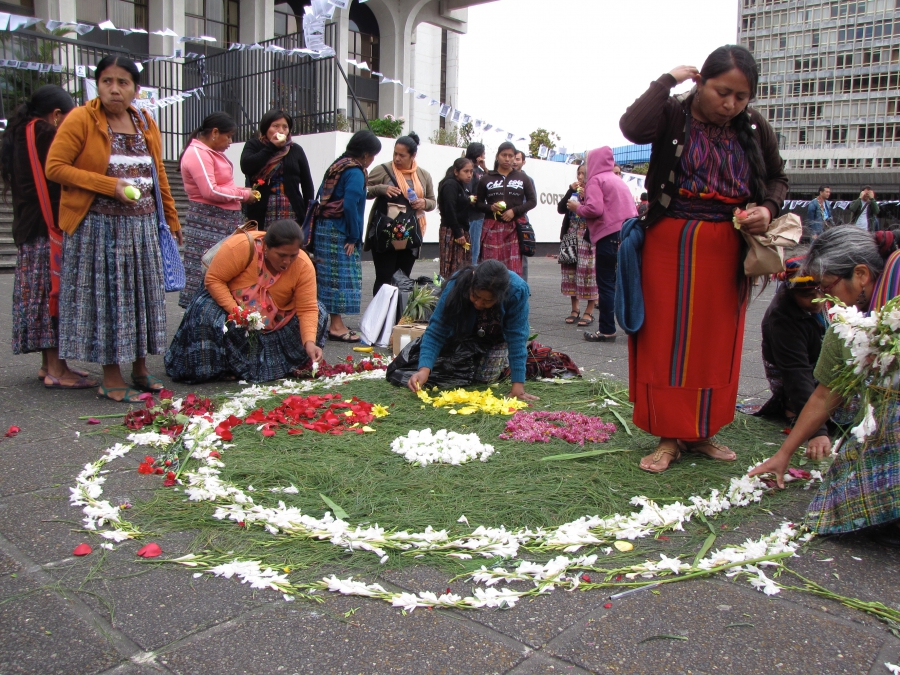