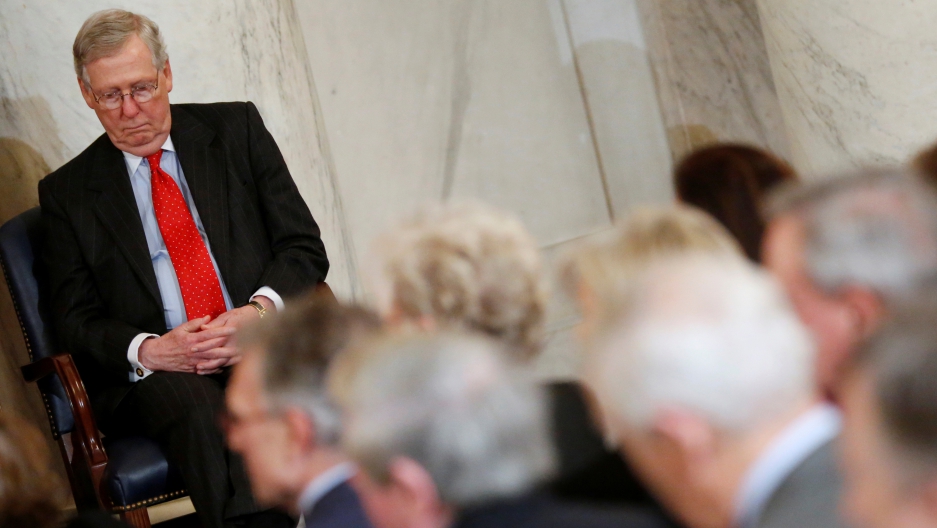 On Monday, Senate Majority Leader Mitch McConnell backed bipartisan calls to investigate allegations from the Central Intelligence Agency that Russia interfered in the 2016 US presidential election. He also pushed back on President-elect Donald Trump's signals that he wants a warm US relationship with Russia.

"Let me just speak for myself: The Russians are not our friends," Senate Majority Leader Mitch McConnell said at a press conference.

On Sunday, a bipartisan group of senators joined together to ask for a congressional investigation into the CIA's report. The president-elect called the intelligence agency's conclusions "ridiculous" in an interview with Fox News.

Russian President Vladimir Putin and Trump have both praised each other several times in the past, and Trump is now reportedly considering Rex Tillerson, the chairman and chief executive of ExxonMobil, for secretary of state. Tillerson has close ties to Putin.

Sen. McConnell criticized the Obama Administration's so-called “reset” with Russia back in 2009, and Takeaway Washington Correspondent Todd Zwillich says that McConnell remains opposed to any sort of realignment in US-Russia relations.

“[Mitch McConnell] said we have reason to believe the Russians hacked and interfered in our election,” Zwillich says.

According to Zwillich, McConnell recently met with US allies in the Baltic states, adding that they are “terrified” by the very idea that the US and Russia are building a cozy relationship.

"I think we ought to approach all of these issues on the assumption that the Russians do not wish us well," McConnell said Monday.

Despite Trump’s statements on the campaign trail that he would potentially abandon NATO members if they don’t meet certain financial obligations, McConnell believes the allied organization is still the “best alliance in the world,” Zwillich says.

Though McConnell supports a Senate investigation into Russian interference in the US election, Zwillich says the majority leader is currently against an independent bipartisan commission outside of the Senate looking into the matter.

“But he agreed that it’s important and that he wants it investigated,” Zwillich adds. “Mitch McConnell also pushed back on Donald Trump in another important way. You saw Donald Trump over the weekend, and really throughout the campaign, basically rejecting the findings from the CIA, saying nobody really knows if the Russians hacked — it could’ve been anyone; it could’ve been the Chinese; it could have been, at one point he said, a 400-pound hacker sitting in his mother’s basement. Mitch McConnell pushed back on that pretty strongly.”

Over the weekend, the Trump transition team tried to discredit the CIA, saying in a statement that the CIA represents the “same people that said Saddam Hussein had weapons of mass destruction.” But McConnell dismissed the Trump team’s attack on Monday.

“Let me say that I have the highest confidence in the intelligence community, and especially the Central Intelligence Agency. The CIA is filled with selfless patriots, many of whom anonymously risk their lives for the American people,” McConnell said.

In addition to standing up to Trump when it comes to the allegations of hacking and the disparaging of the American intelligence community, Zwillich says it appears Senate Republicans may also stand against Tillerson as secretary of state.

“Nominations have a way of becoming proxies for much broader issues,” says Zwillich. “This entire issue of whether to warm to Russia or not, Mitch McConnell seems to have made his view on that clear, but he declined to say whether he thought Rex Tillerson could get confirmed in the Senate — he didn’t say yes or no, which is certainly not a strong endorsement.”

“Donald Trump can only afford to lose one vote [on the Senate Foreign Relations Committee],” says Zwillich. “Tillerson, if he’s nominated, may have a Senate problem, it’s becoming pretty clear.”

This story was first published by PRI's The Takeaway, a public radio program that invites you to be part of the American conversation. Note: The Takeaway is sponsored in part by ExxonMobil, though has no say in the editorial content on the show, or on PRI.org.