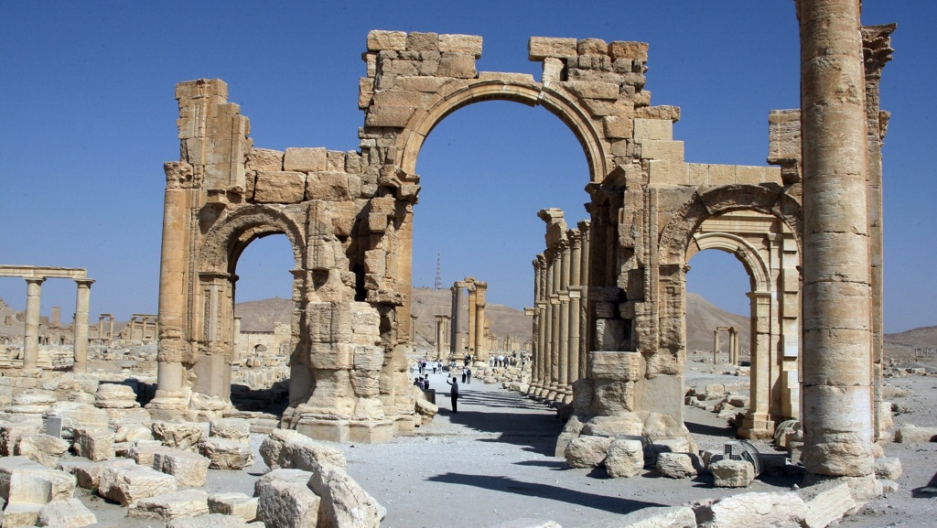 Tourists are seen visiting Palmyra also known as Tadmur in Arabic, 220 kilometers northeast of the Syrian capital Damascus, on June 19, 2010. Palmyra was known for being a wealthy city located along the caravan routes linking Persia with the Mediterranean ports of Roman Syria and Phoenicia and home to Queen Septimia Zenobia.
Credit: LOUAI BESHARA
Share

The Islamic State group recaptured Palmyra on Sunday after Syrian armed forces pulled out of the desert city, the Syrian Observatory for Human Rights said.

"Despite the ongoing air raids, [ISIS] retook all of Palmyra after the Syrian army withdrew south of the city," said Observatory head Rami Abdel Rahman.

The jihadists made a lightning-fast advance across the city after overrunning a northern neighborhood and capturing the famed citadel to Palmyra's west.

The ISIS-linked Amaq news agency also reported that ISIS regained "full control" of the city on Sunday after taking the citadel, which overlooks Palmyra from a strategic hilltop.

It seized oil and gas fields before making a major push into the desert city on Saturday, sparking new worries for Palmyra's remaining ancient treasures.

But a fierce Russian bombing campaign killed scores of ISIS fighters and forced others to withdraw at dawn on Sunday.

"Intense Russian raids since last night forced [ISIS] out of Palmyra, hours after the jihadists retook control of the city," said the Observatory's Rami Abdel Rahman.

"The army brought reinforcements into Palmyra last night, and the raids are continuing on jihadist positions around the city," he told AFP.

In a statement issued in Moscow, the defense ministry said Russian warplanes conducted 64 airstrikes against "positions, convoys and advancing reserves of militants" in Palmyra.

"Over the past night, Syrian government troops with active support of the Russian air force thwarted all terrorist attacks on Palmyra," it said in a statement.

"The attacking militants actively used car bombs with suicide bombers, armoured vehicles and rocket artillery," it said, adding that the strikes killed more than 300 militants and destroyed 11 tanks and 31 vehicles.

Russia has carried out a bombing campaign in Syria in support of its ally President Bashar al-Assad since September 2015.

ISIS fighters have used hit-and-run tactics to cut their losses of personnel and equipment, withdrawing under intense bombardment but quickly relaunching an attack when skies are clear.

The jihadists have killed around 100 members of Syrian government forces since launching simultaneous attacks on several regime positions near Palmyra on Thursday, the Britain-based Observatory said.

They targeted areas including near the Mahr and Shaar oil and gas fields and seized government checkpoints, silos and the village of Jazal, northwest of Palmyra.

In May last year, the Sunni Muslim extremist group seized several towns in Homs province including Palmyra, where they caused extensive damage to many of its ancient sites.

They were ousted from Palmyra in March by Syrian regime forces backed by Russia.

That was hailed as a major victory, with Russian celebrities traveling there since March staging concerts and making public appearances.

Moscow has been under severe criticism for its airstrikes on Aleppo — which it says it stopped on October 18 — where the anti-Assad opposition is currently holed up in just a fraction of the territory it once controlled.

The city's eastern districts are still being bombed by the Syrian regime which Washington has labeled "war crimes" and a UN General Assembly demanded an immediate ceasefire to stop the carnage.