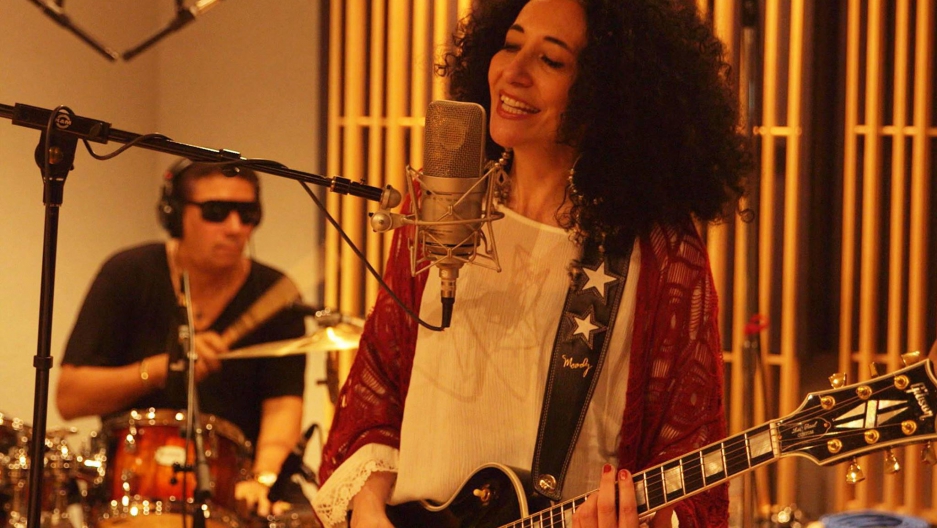 Eljuri, one of the artists featured on The World this week.

Each week on The World, we feature a unique selection of musicians, and every week we put it together for you here.

Here's the latest, curated by host Marco Werman and director April Peavey. (If you're looking for all the music you heard on the show, go here.)

A Latina rocker with Arab roots turns it up to 11

For some musicians there's power in using just one name for the stage. That's true for the musician Eljuri. She was born in Ecuador, but grew up in Manhattan. She started a band at 12 years old playing cover tunes by the Rolling Stones. Her latest album is La Lucha. — April

This singer from Cape Verde follows her dreams

Kady left her home in Cape Verde to make it as a singer in Portugal. When we caught up with her a couple months ago, we asked her to pick a track from her latest album and to tell us what it's about. The song she chose is "Kaminho" and it's about following your dreams and immigrating to a new place. — April

The lyrics to the song "Lucky Man" sound like they might be about a crusader who once rode through the Ottoman Empire. But all composer Greg Lake could remember was that the chord progression gave him the feel of a medieval song. And he came up with the words around that idea.

We got the news yesterday that Greg Lake died at the age of 69. He was the guitarist, singer, and songwriter for English prog-rock outfits King Crimson and Emerson Lake and Palmer.

He composed "Lucky Man" when he got his first guitar at the age of 12. As he explained in his biography, he himself was lucky: He grew up in a poor family, and when he asked his mom for a guitar, she said yes.

Greg Lake never wrote down the words to "Lucky Man." He committed them to memory. And years later, when Emerson Lake and Palmer put out their first album in 1970, "Lucky Man" was one of the hits.

OK, for prog-rock it was a hit: It reached the top 20 in the Netherlands.

The other notable thing about Greg Lake's song: It was one of the first rock numbers to feature a Moog synthesizer solo. — Marco

And now, just something extra

For several weeks, I've been listening to the new album by British-Ugandan soul singer Michael Kiwanuka, "Love & Hate." And one song especially has stuck with me: "Black Man in a White World." It's a raw emotional statement, along the lines of Fats Waller's "(What Did I Do To Be So) Black and Blue." — Marco

Earlier this week on The World, we had the story of twin pandas Mei-Lun and Mei-Huan.

They were born at Zoo Atlanta in Georgia, but because of a panda-breeding agreement with the Chinese government, Mei-Lun and Mei-Huan have to spend time in a Chinese zoo.

They got there not long ago, and the adjustment to life in China has not been easy. Apparently, the Giant Panda twins don't like Chinese food (they're fed a dim sum favorite, steamed bun), and they understand only English commands.

So I proposed something to keep them happier: music. And I suggested a new song by Argentine ska-rockers Los Fabulosos Cadillacs, "La Musica Salvará al Mundo." "Music will save the world."

Who are we, or any giant panda, to disagree? — Marco