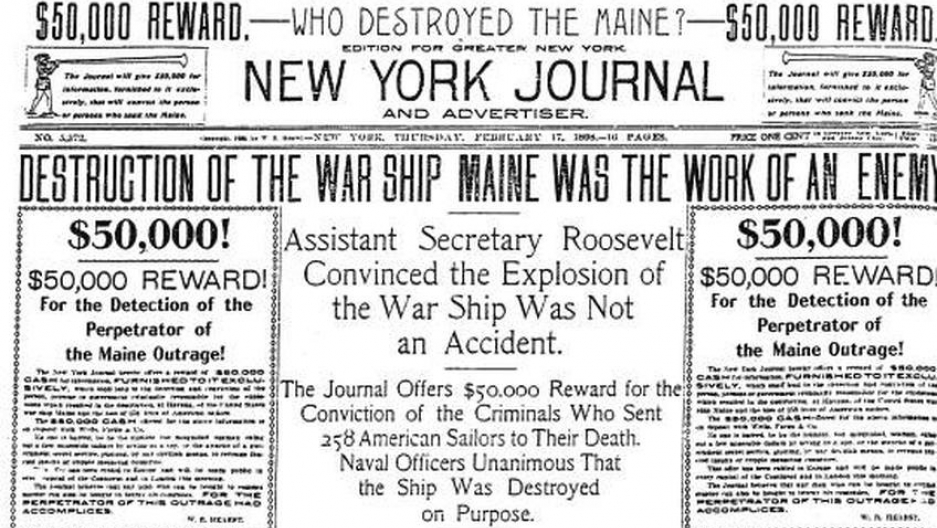 This is part of the front page of the New York Journal, from Feb. 17, 1898, when fake news helped start a war.

Fake news is nothing new. Its impact has waxed and waned through American history. But there was a golden age of "yellow journalism," back in the 1890s, when fake news helped start a war.

Yellow journalism has been defined as any journalism that treats news in an unprofessional or unethical manner.

The term was coined in the 1890s to describe the ferocious circulation war between William Randolph Hearst's New York Journal and the New York World, owned by Joseph Pulitzer.

They sought out crime, scandal and salacious detail. Facts that got in the way of a gripping story could be left out. Imaginary details could be added. Any excuse to include an image of a scantily-clad woman was welcome.

The goal was to create a sensation that would prompt people to buy copies of the paper. In other words, truth was sacrificed, a victim to profit.

There were some benefits to this kind of muckraking. Corruption and incompetence were ruthlessly exposed, and some good causes were adopted, even if the stories were pushed unethically.

One cause adopted by both papers in the 1890s was that of the revolutionaries in Cuba, fighting for independence from Spain. The rebels were cast in the same mold as the patriots who fought for American independence. Spanish atrocities were played up; rebel atrocities were ignored. The editorial line was that America should help.

In 1898, the US Navy battleship, the USS Maine, blew up while off Havana, Cuba, killing more than 250 Americans. The cause was never discovered. But the yellow press jumped to the conclusion that the Spanish did it deliberately. “Remember the Maine” became the slogan of the yellow press, driving public opinion toward war.

There were plenty of other factors behind the Spanish-American War of 1898, but the conflict was in part enabled by this barrage of misleading journalism.