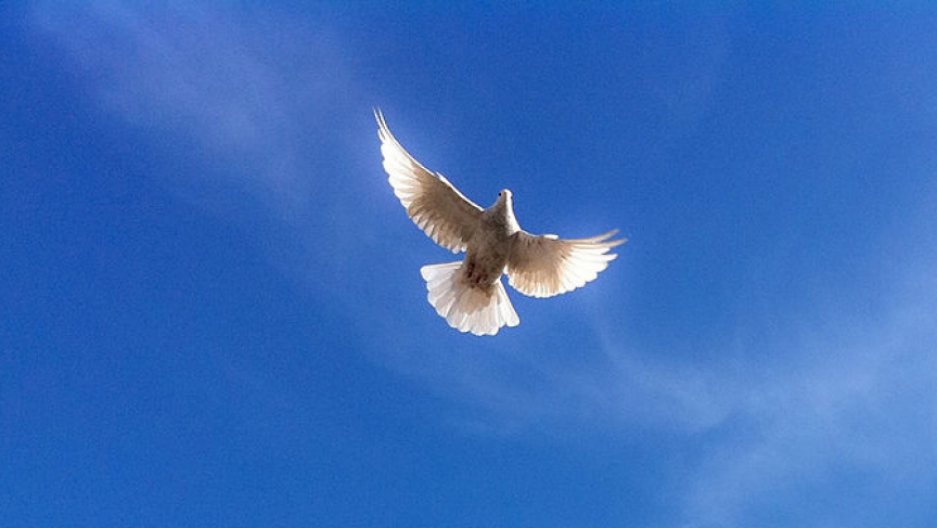 The dove, a symbol of peace, flies over a mosque in Afghanistan.

The civil war in Syria may be entering a decisive phase. Forces loyal to President Bashar al-Assad have seized almost all of the key city of Aleppo from rebels. Some analysts are talking about the end of the war. But how do wars end?

Americans tend to think of wars ending with the unconditional surrender of one side, as happened in World War II and in America’s own Civil War. But that’s pretty unusual, according to Gideon Rose, the editor of Foreign Affairs magazine, and author of the book, “How Wars End.”

“Clausewitz — the great military theorist — defined war,” says Rose, “as the continuation of politics with the addition of other means — military force.

“So, the way to think about the end of a war is not a boxing match, with a knockout,” explains Rose, “but rather as a political relationship that essentially continues with actual force no longer being used.”

In the real world, he says “that happens if the parties decide that they know how it’s going to end, and they essentially no longer need to keep fighting. Because they can see the outcome, and they just accept it. Or they essentially know they’re going to have a draw and figure it’s not worth continuing to try to push up against a brick wall and agree to have a long-term settlement.

“But,” as Rose explains, “the key is basically all parties to the conflict coming to a similar view of what is happening and what the trends are in the future. Until you have that, as long as there’s hope for one side that they might get back up, or that the current reverses could be fixed, there’s always a strong tendency to keep battling it out.”

“Syria and Iraq — they’re really now part of a common area,” says Rose. “The war that’s happening is a consequence of the collapse of political order in these countries, whether from the outside because we toppled Saddam’s regime, and never really replaced with any stable order afterwards, or in Syria because of the Arab Spring and the uprisings and the partial victories early on. So, it’s not really a conventional war.”

The conflict between the Assad regime and the rebels is only one of the conflicts in Syria: there's ISIS, there's al-Qaeda, there's the Kurds. Now the Turks have a presence.

“This is really 'Game of Thrones,'” says Rose, referencing the hit HBO series. “I’m not being facetious. If you want to understand what’s going on in Syria, it looks much more like medieval Europe than it does contemporary Europe. This is not just large-scale military forces directed by high-level strategists sitting in their bunkers, fighting it out on a Maginot Line. This is a whole welter of competing factions with nobody able to impose order across the country. Lots of different groups, lots of lines of authority, lots of outside players.

“When you think about it that way, it’s not just a military outcome. The war in Syria and Iraq only ends when there’s some sort of stable political settlement in the country, and that means either one side wins, or there’s an agreed-upon division in the country, or you have a fixed frozen conflict in which things stay, but they’re not really decided upon, but no-one wants to challenge them. But none of those things seems immediately likely in the very near future. So, I would expect things to continue. It’s a tragedy, but it’s even more complex than people think, which is why all the policies towards it are bad.”