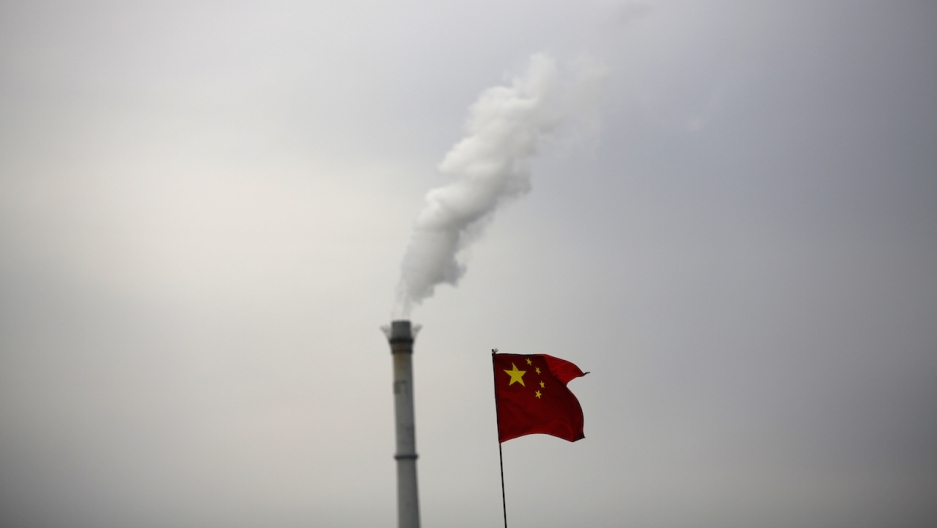 China's national flag is seen in front of the chimney of a cogeneration plant in Beijing, Nov. 7, 2014.

It’s official. The next White House, according to Donald Trump’s chief of staff, is likely to treat climate change as a “bunch of bunk.”

This would, of course, require a radical rejection of scientific fact. Almost every nation on earth now vows — on paper, at least — to try to halt cataclysmic climate change. Even North Korea is on board.

But under Trump, the US executive branch may stand alone in embracing deeply discredited views on climate.

This could bring severe consequences. There is almost no way to reverse climate change without the cooperation of at least two very powerful nations.

One is the United States, far and away the biggest carbon dioxide emitter in human history, and currently the second-biggest offender. The other is China, the top emitter.

Only one of these countries is in thrall to climate change deniers. But what about the other key player in this crisis: the Communist Party of China?

Are there also climate change skeptics within Chinese officialdom?

Almost assuredly, says John Chung-En Liu, a sociologist with Occidental College in California. But they’re marginalized, he says, and know better than to openly spout their fringe views.

“No higher-up Chinese officials have publicly said, ‘It’s a hoax,’” Liu says. “But it’s possible some hold that view and just won’t say it.”

The party line is that China’s leadership takes climate change threats very seriously and must rapidly veer toward renewable energy. The party is loathe to see minor officials muddling up this message.

“Everything the Chinese government does on climate change is heavily scrutinized internationally,” Liu says. “They’re extremely careful with the image they present.”

In other words, an official could be harshly punished for undermining the party position. But there is a significant undercurrent, Liu says, that views climate change as a Western plot to undercut China’s rise.

This phenomenon, which Liu has studied for several years, does not dominate political thought. Still, a growing body of Chinese-language books and online screeds depict the nation as duped by a Western-led climate regime.

One such book, “The Empire of Carbon Brokers,” says that “one day in the future, we will discover that the planet is not getting any warmer, but colder … we will also realize that we are already tightly controlled by the United States, becoming their new slaves.”

The weather “is obviously getting colder and colder,” Lang says, “but they are still lying through their teeth.”

“These foreign bastards are so worried that China will rise and surpass the United States … The scientists are all puppets controlled by politics. Copenhagen liars! American liars!”

Top officials will never speak this way, Liu says. “But statistically speaking, there must be a group — among the hardcore left wing — that has similar views.”

Unlike in America, climate change skepticism in China is largely a left-wing notion. It flourishes among hyper-nationalist circles with a Cold War outlook, Liu says. They see America as “an imperial, colonial power they must fight against,” he says. “They’re still stuck in that mentality.”

If China had a US-style political system, in which outside corporate lobbyists wield immense power, such sentiments might be nurtured among the political class — namely by a private energy sector fearful of profit-sapping carbon taxes.

But in China, the energy sector is largely state operated and must conform to official policy. And that policy, enshrined in China’s latest five-year plan, is ambitiously green.

China already generates four times as much clean power as does the United States. The party is also mindful that it has lots of work to do. Much of China’s environment is a disaster. Millions of Chinese are sick of choking on smog and drinking from foul-smelling rivers.

Moreover, Trump’s climate change denial is a weakness that Beijing knows it can exploit. State-run papers are already crowing that the US will “betray its words” on climate change while “China will unswervingly keep its promise.”

“China now sees itself as moving into a better position to win this race,” Liu says. “They want to emerge as a new force, a new leader, on climate action.”

With an incoming White House eager to abandon the race altogether, that lead position is more obtainable than ever.

The Communist Party’s small band of climate change skeptics may chatter in the shadows. But Beijing’s powerful elite would never allow a small fringe in their ranks to sabotage one of their prime goals: outshining the United States in the 21st century.