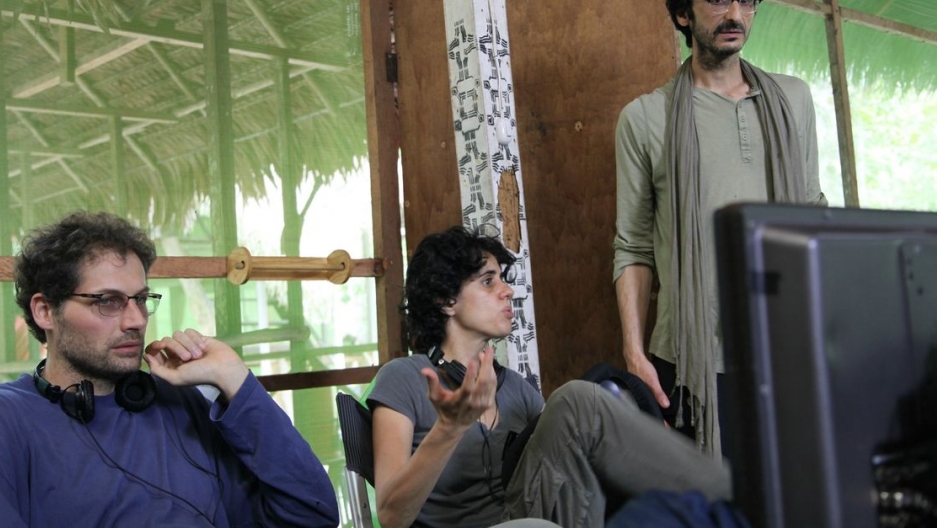 Co-directors Matteo Norzi and Leonor Caraballo, with producer Abou Farman on set in the Peruvian Amazon.

When artist Leonor Caraballo was diagnosed with breast cancer in 2008, she naturally turned to art to expose and make sense of the illness working within her. Using a 3D printer and MRI images, Caraballo and Abou Farman, her husband and collaborator, created sculptures and jewelry in the knotted shape of her tumor. They called the project, “Object Breast Cancer.”

“For me, it’s a reminder that — I hate the word ‘survivor’ — but that I am here, and this thing is out of my body and I feel more powerful than it,” Caraballo told Kurt Andersen in 2012. She kept the reminder close, a gnarled bronze amulet worn around her neck.

But for Caraballo, who passed away in 2015, it would not be the final battle with cancer. After Farman introduced her to ayahuasca, a hallucinogenic and medicinal plant used in the Amazon, he says that Caraballo — who “never did anything half-assed” — traveled to Peru to work with the best practitioner she could find. When Caraballo returned, still seemingly healthy, she told Farman that while taking ayahuasca, she “saw her own death.”

“She came back, and she was stunned,” Farman says. “And so, she said very quickly after that, ‘I want to make a film.’”

Caraballo ventured to the Amazon with her co-director, Matteo Norzi, to research ideas for a film. While there, she felt a pain in her ribs. "She said immediately, ‘It’s cancer,'" Farman recalls. Her surgeon assured her that, five years after cancer surgery, the pain was likely muscular — but tests confirmed what Caraballo already knew: Cancer had returned, this time to her bones.

Caraballo and Farman agonized over whether to continue with the film project. “It was clear that if she were to go on a shoot, that her body would be working on something else, instead of working on managing the cancer,” Farman says. But to do nothing was even more unfathomable. He remembers Caraballo telling him, “I don't want to just sit here and wait for death. I want to do this film.”

The film became “Icaros: A Vision.” It follows the story of an American woman who goes to the Amazon in search of a medical miracle. There, she meets a young ayahuasca shaman who instead teaches her to face her susto — "the disease of fear."

As the film’s production moved along, so too, did the progress of Caraballo’s cancer. “I think what she did, was, she made this creative act part of her dying, and the dying became itself a creative act,” Farman says. The plot, which he recalls was developed “because the film had to have a plot,” began to take on distinctly autobiographical elements.

“There's a scene with a mosquito net in the middle of the jungle, and that was shot early on, in the first couple of days,” Farman says. “I remember when we set up the mosquito net, and the actress crawled in and everything was coming down, and the [assistant director] called ‘Silence.’ And I just suddenly saw very clearly that Leo was directing her death in that scene. I think it hit home for everyone.”

By the time the film’s first rough cut was completed, Caraballo’s health had deteriorated, and it seemed unlikely that she would live to see the finished film.

“But she was involved from her deathbed,” Farman says. “She would talk to a friend of ours who was visiting, who saw the first cut, and in the middle of dealing with nephrostomy tubes and kidney failure, she would be talking to him about his opinion of the weaknesses of the film.”

Caraballo didn’t live long enough to see “Icaros” screened at Tribeca and other film festivals worldwide. But for Farman and her collaborators on the project, the film has become part of Caraballo’s afterlife.

“Her intentions, her aesthetics, her vision — all of these things became part of how we also continued with her and without her, through the making of the film [and] the finishing of the film,” he says. “But we kind of continue to use the present tense with her. She's still active. She has agency. She has an effect on us and on things.”

This article is based on a story that aired on PRI's Studio 360.