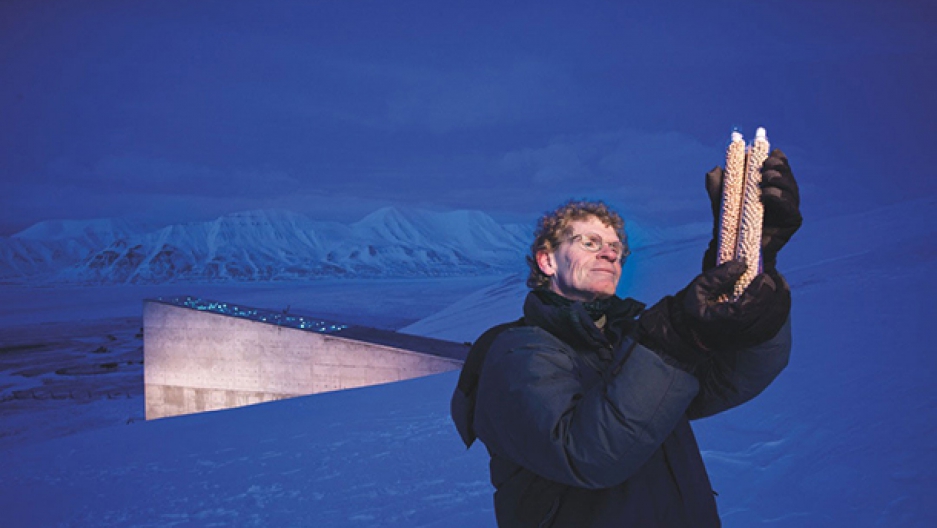 Cary Fowler is pictured here outside the entrance to the Svalbard Global Seed Vault. Fowler led the effort to create a central seed bank as a fail-safe backup to the world's national seed banks.

Deep in an icy mountain not far from the north pole are rows upon rows of boxes filled with seeds — nearly a million samples gathered from the seed collections of nations around the globe.

This is the Svalbard Global Seed Vault. The vault, says its founder, Cary Fowler, is “the backup insurance policy for all the seed banks around the world." Fowler has just come out with a book featuring stunning photography called, "Seeds on Ice," which tells the story of the seed vault's founding and its purpose.

“The idea is that we want to provide fail-safe protection for the diversity of our agricultural crops, diversity that is stored in the form of seeds,” Fowler says. “You need freezing temperatures to conserve seeds long term. So we went close to the north pole, where it's very cold, and we built a facility inside of a mountain, which makes it also very secure. There we're storing backup copies — seed samples of, currently, more than 850,000 different crop varieties.”

The world needs a backup because catastrophic things happen to seed banks at a local or national level, Fowler says. For example, there was a fire and a flood inside the Philippines' national seed bank, while the Iraqi and Afghan seed banks were destroyed and badly damaged by war.

“Seed banks are a bit like libraries, and every once in a while something bad happens to an individual book in a library,” he explains. “Likewise, even in a really great seed bank, something bad will happen to a particular sample, just by accident or mismanagement. And every time something bad happens like that, we lose that variety. In other words, it's an extinction event.”

Norway was the ideal location for the Global Seed Vault, in part, because of the positive role the country so often plays in international discussions and debates, Fowler says. Norway provided the perfect physical conditions and, not coincidentally, the funding for the vault.

A good seed bank will keep its seeds at a temperature of about 3 or 4 degrees below zero Fahrenheit, and there’s no place on Earth where that is possible to achieve naturally, without mechanical cooling. So the challenge, Fowler says, is “to find a place that gives you naturally cold temperatures — as cold as you can get — and from there, lower it a little bit further. That's what we have in Svalbard.”

Svalbard is a group of islands about 1,300 miles north of Oslo, above the Arctic Circle. It is about twice the size of Belgium, and the terrain is 60 percent covered with glaciers. “It’s a remarkably beautiful, exotic, otherworldly place,” Fowler says. “It can snow on any day of the year. Still, great infrastructure, very safe, secure. It was just the ideal location.” 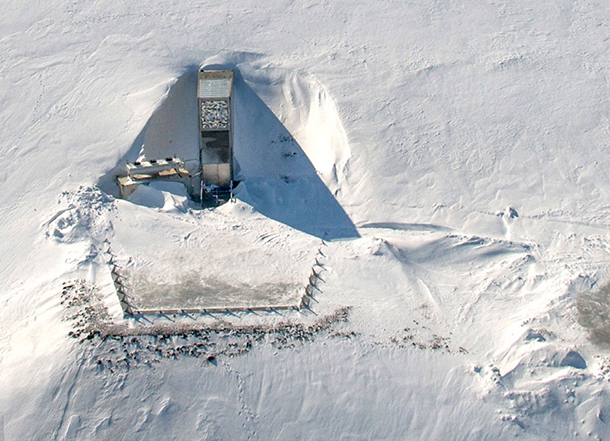 The seed vault is tucked into a frozen mountainside on the Svalbard archipelago.

The vault begins with a tunnel that runs 130 meters deep into the side of a mountain. At the end of the tunnel are three vault rooms, each about 30 meters long, 10 meters wide and five meters high. Only one of the vault rooms currently holds seeds. Fowler calculated how much space would be needed to store all of the agricultural seed diversity in the world and built enough space to hold three times that amount, because, as he says, he could be wrong. 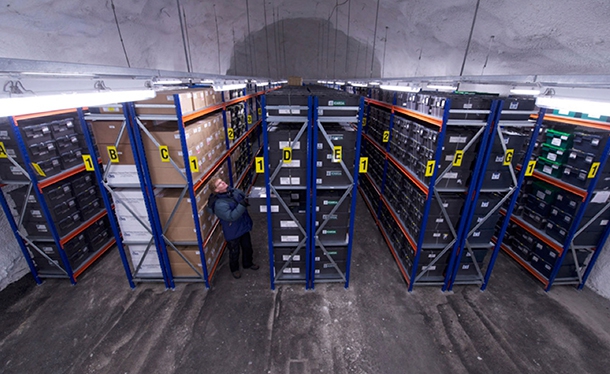 Inside the vault, rows of shelves hold boxes; each box contains about 400 to 500 seed samples, all in individual packets. Each packet has 500 seeds. Currently, the vault stores about 500 million seeds. Most of these seeds will stay viable for several thousand years.

“You have to walk down the aisles with some humility, because what you're seeing is the results of agricultural evolution over the last 15,000 years,” Fowler says. “It's essentially a biological history of agriculture. Everything that agriculture can be in the future is represented in that diversity.”

The world has already lost quite a few varieties of fruits and vegetables, but Fowler makes a distinction between variety and diversity. Diversity refers specifically to genetic traits that have been modified over millennia either by nature or by selective breeding. “You can have a trait that appears in more than one variety of apple, for example,” Fowler explains. “Losing a variety of apple doesn't mean you've lost that trait, necessarily, but in some cases it does.”

Diversity is cropping up all the time, so seed collection will never really end, Fowler says. “We would like to get more of the wild relatives of our domesticated crops. They’re pretty tough plants, and in a situation where the weather is bad or there's global warming, those kinds of traits are really interesting and useful for agriculture.”

National seed banks monitor their own seed supplies all the time, Fowler says, so “when they see that a seed sample is declining in its viability, they will take some seeds out, grow them in the real world and multiply them. When they do that, they'll send more seed to the seed vault. It's a living facility, and we’ll always have seed coming in.”

The vault recently had its first withdrawal of seeds, which Fowler calls “both a sad and a happy occasion. It was sad that the withdrawal needed to take place. It was happy in that we had the backup copy, so the collection in question wasn't lost,” he says.