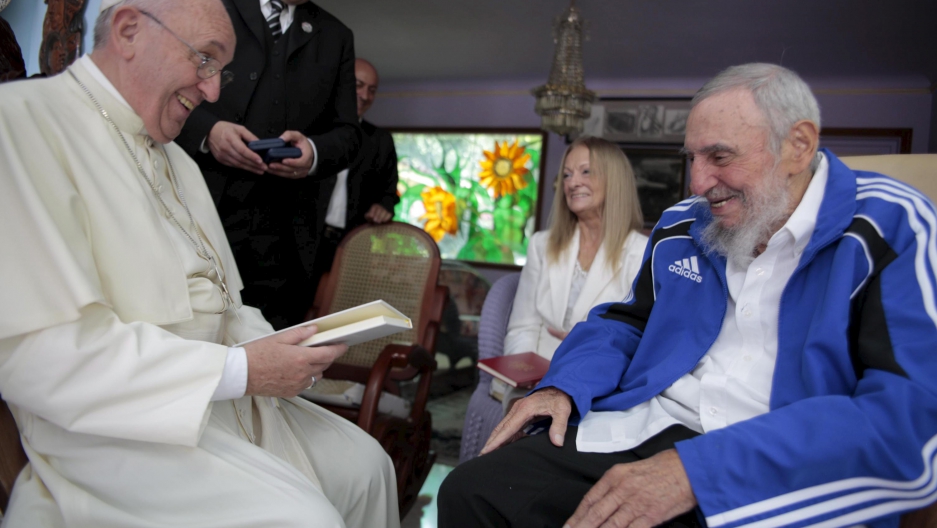 Pope Francis (L) and former Cuban President Fidel Castro (in a tracksuit) share a laugh in Havana, Cuba, on Sept. 20, 2015.

The classic image we have of the late Cuban leader Fidel Castro is that of a bearded man in military fatigues — the uniform of revolution. But in his later years, Castro donned another outfit: the retiree tracksuit.

Castro did officially retire from Cuba's presidency in 2006 — though he continued to heavily influence the island nation's leadership — putting his brother Raul in power, where he remains to this day.

But a curious fact about his retirement outfit of choice is that the Western Hemisphere's longest-ruling communist leader was sporting some of the most globally recognizable capitalist brands: Nike, FILA and Adidas.

What's more, he wore one of them to his meeting with Pope Francis last year. (Castro's revolution long eschewed all religion.)

regardless what you think of fidel castro, we can all agree that he did in fact meet with the pope while wearing an adidas tracksuit pic.twitter.com/sb7jAbp0d9

The Castro tracksuit has become sort of a thing.

A German edition of French satire magazine, Charlie Hebdo, recently published a cartoon of German Chancellor Angela Merkel, who's governed for 11 years and is running for re-election, wearing a Castro tracksuit.

This one made me laugh: the new German edition of Charlie Hebdo has Merkel in a Castro-style Adidas tracksuit with a 50-year term pic.twitter.com/umCFqJVrTo

Quartz published a whole thing about Castro's habit of wearing these tracksuits to meetings with foreign dignitaries. For his 90th birthday, Castro donned the tracksuit of the Algerian soccer team.

But he also rocked the Team Cuba tracksuit — created by Adidas for Cuba's Olympic team. Communism!