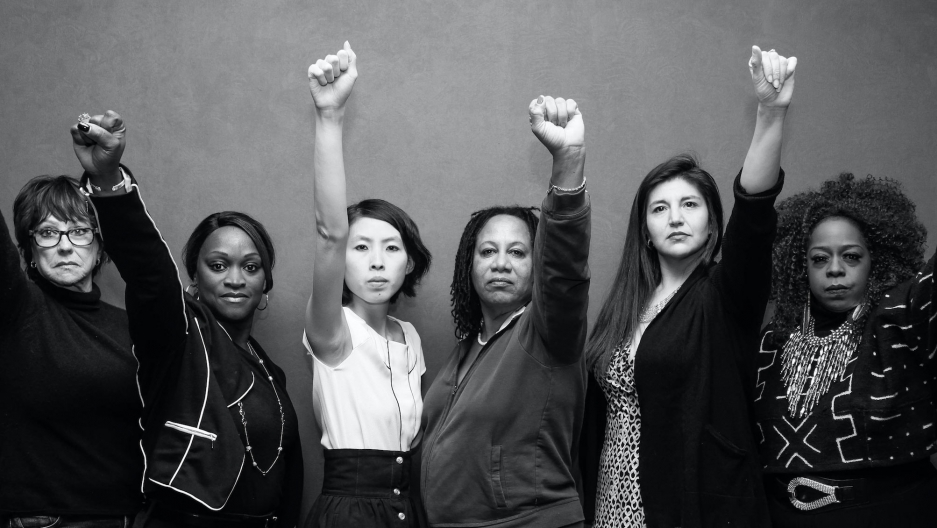 Members of the group, Women and Allies, are pictured here.

This isn’t Ann Massaro’s first foray into activism — the 68-year-old from Connecticut has been protesting and organizing her entire life. But she sees the election of Donald Trump as her biggest cause yet, and she hopes young women, in particular, will be joining her on the front lines.

Massaro's first effort to counter the Trump administration is an attempt to have a nationwide day of strikes on Dec. 12 — the week before the Electoral College casts its votes.

“I started by posting on all pages that were anti-Trump, asking for women who wanted to organize their cities,” said Massaro. “I had this vision.”

Massaro’s vision grew to be the group, Women and Allies. Inspired by historic, women-led strikes in Iceland that protested the gender pay gap, Massaro and other organizers are hoping that women across the US walk out of their jobs and refuse to buy anything for 24 hours. They want to send a message to the Electoral College and the American people that women will not stand for misogyny and discrimination.

So far, the group has commitments from thousands of women to join them in protests, marches or performance-based events. A key metric of success at those events will be how many women they get to sign a Change.org petition directed at the Electoral College. "One consistent thing at the protests is that there will be iPads or smartphones available for people who have not signed the petition to the Electoral College," said Massaro. "They can sign right there, and we can electronically transmit their signatures, so there is no paper involved."

"Our diversity is our strength, for our many liberations are tied together,” says the group’s mission statement. “Now more than ever we embrace the sentiment that women’s rights are human rights and human rights are women’s rights. We will unite to show we will not be bullied — now more than ever before, we are stronger together.” The latter part of the Women and Allies mission statement bears a clear resemblance to the rhetoric used on the campaign trail by Trump's former opponent, Democrat Hillary Clinton.

The first priority for the movement was finding organizers to take the reins in their local cities. Massaro quickly noticed that it was young women who raised their hands the fastest. “None of these women have ever organized before. This is a whole new generation of feminist activists.”

Isabella Gutierrez, 21, is one of the many millennial women who've joined Massaro and her co-organizers to help bring the strike to about 18 cities. In between classes at New York University, Gutierrez is organizing the New York City event with Massaro and several other volunteers.

“I was on Facebook, and I saw that Ann was calling for somebody in New York City,” said Gutierrez. “I realized I think I can at least help organize. I spoke to her. She convinced me more into organizing the entire scene. I told her as long as I have help with other people, I should be able to do this. I didn't think it was going to be so big. I was hoping it would be big, but I didn't think it would grow so fast.”

According to Facebook, the New York City event has more than 14,000 people interested, and more than 4,000 who say they will attend.

For millennial women, the majority of whom did not vote for Trump, mentorship from seasoned activists, such as Massaro, gives them reason to believe that their efforts will not be in vain.