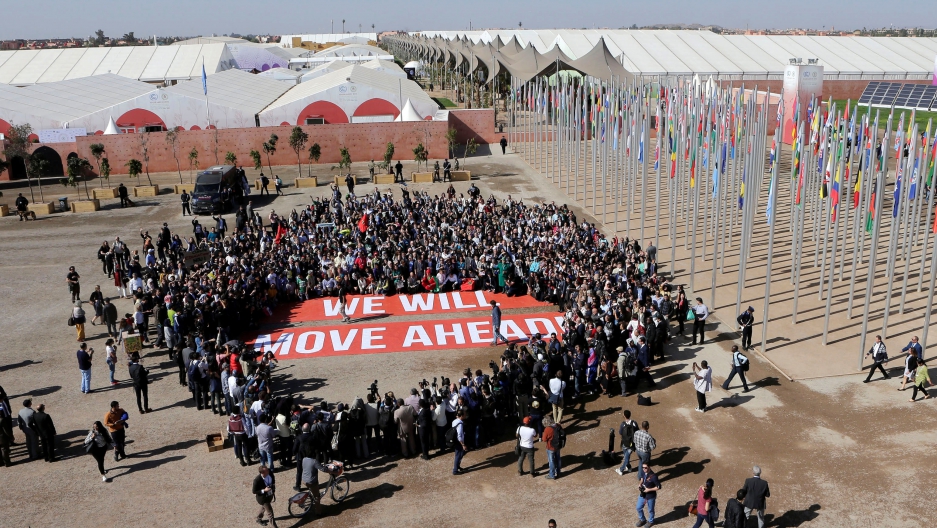 US President-elect Donald Trump campaigned on a promise to “rip up” the Paris climate agreement. But at the first official meeting of the parties to the agreement, other nations expressed their determination to implement the deal and to continue their work on climate protection, even if the US withdraws.

Trump’s rejection of the Paris Agreement has generated “an unprecedented sense of solidarity among all the countries,” says Alden Meyer, director of strategy and policy for the Union of Concerned Scientists.

“Country after country has said that they intend to move forward to implement and strengthen Paris,” Meyer says. “You've seen that from subnational governments, from California to Ontario to German states and others. You've seen that from cities around the world, and just yesterday over 360 US companies came out and implored Mr. Trump not to pull the US out of Paris, and said they are committed to decarbonizing their business models. So, it has really united the rest of the world. There has not been one single country that has said if the US pulls out they will follow.”

The Paris Agreement came into full force just before this year’s high-level UN Climate talks (COP22), which took place in Marrakech, Morocco, and wrapped up on November, 18. As the agreement is now international law, it would take four years for the US to withdraw.

No one knows for sure whether Trump will fulfill his campaign promise. Just recently, he seemed to soften his stance on the agreement in an interview with the New York Times. At the same time, a close adviser on environmental issues has suggested “zeroing out” funding for climate research at NASA, calling the science “politically correct environmental monitoring.”

Under the agreement, if Trump decided to withdraw, he would have to wait three years, and then give one year’s notice, but “apparently they're looking at shortcutting that with some kind of executive action to try to undo what President Obama did to join the Paris Agreement,” according to Meyer.

“I'm not a lawyer, and I don't know all the intricacies, but apparently they are looking at different options,” Meyer says. “They're also apparently considering the option of pulling the United States off the Rio framework treaty from 1992, where the waiting period is just one year, not four. But, of course, that would take the US out of every aspect of the international climate regime. I call it the 'nuclear option.'”

At the meeting, US Secretary of State John Kerry gave a powerful speech, describing why it is in the world's interest to move ahead with the Paris Agreement. “He was talking about the impacts on the United States. He talked about the clean energy revolution, the rapidly falling prices for efficiency and renewable energy technologies and how this can be a driver of economic prosperity for countries that move in this direction, including the United States,” Meyer says.

Kerry also talked about how a large number of clean energy jobs have already been created in the US and that "he thought … it would hurt our standing in the world on other issues, like security and trade.”

China, the world’s biggest emitter of greenhouse gases, has made it clear they intend to move forward with the agreement, Meyer says.

“They see it in their own national interest to deal with air pollution, to deal with the health effects that they are seeing from their current energy system,” he explains. “They see also advantages to maintaining leadership in the clean energy technologies of the future, from advanced vehicles to renewable energy to battery storage. They have no intention of pulling back. I’ve been told privately by people in China that they anticipate they can overachieve the target they put forward in Paris.

“They made it very clear that if the US decided to withdraw under Mr. Trump, they would continue to try to provide leadership on this issue,” Meyer continues. “I think, from a geopolitical perspective, it would create an opening for China to enhance its influence and standing of the world if the United States vacated the field.”

Meanwhile, the Obama administration recently released a "deep decarbonization strategy" to rapidly reduce US global warming emissions by the year 2050. The plan looks at a range of scenarios, most of them aimed at what it would take to meet the existing 80 percent carbon reduction goal by 2050, Meyer says.

Canada and Mexico, who have been coordinating their efforts with the US as part of the larger North American economy, joined the US in releasing their plans. Germany also released their plan, which aims for as much as a 95 percent reduction by 2050.

Meyer says the US plan contains “a lot of good analysis and information, not just on the energy and transportation sectors, but a pretty deep dive into land use, forestry and agriculture, and how we might ramp up the ability of the land sector to absorb carbon dioxide over the next 35 years.

“It looks at the potential difficulties with carbon lock-in of infrastructure, it looks at electrification of the vehicle sector and integration with the electricity sector, and issues like storage and renewables integration. So, it's a very serious piece of work,” Meyer says.

Right now, however, there’s no indication that Trump and his team will have any interest in building on this plan and looking for ways to phase out fossil fuel emissions, so it’s not clear how relevant the plan is to future US climate policy, Meyer concludes.