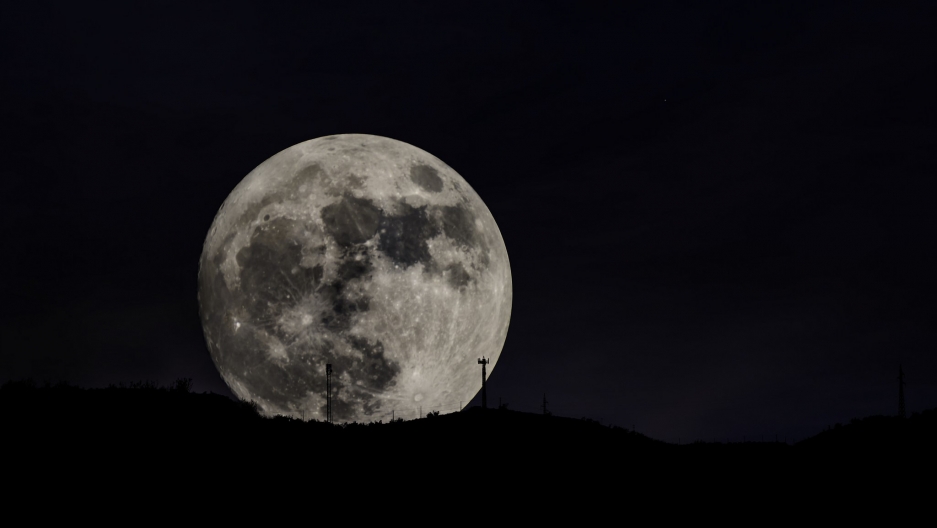 This is a snapshot of November’s “supermoon” in southern Spain.

The moon just had its Hollywood close-up. In mid-November, its slightly elliptical orbit brought the full moon closer to Earth than it’s been since 1948, and it dazzled in the part. Photos from sky-gazers around the world show the familiar orb looking round, bright and startlingly big.

While our celestial neighbor may have seemed impossibly near earlier this month, scientists say that in the past, it’s been much, much closer. In fact, it’s widely believed that the moon was created from the Earth billions of years ago, when a Mars-sized body smashed into our planet, creating enough debris to form a satellite. But something about this “giant impact” theory has always seemed off-kilter: It doesn’t quite explain why the moon orbits Earth at an angle. Now, a recent paper published in Nature is suggesting an answer, beginning with new ideas about how the impact may have tilted Earth.

As Sarah Stewart explains, the original giant impact theory tried to explain the moon’s large size compared to Earth, and the chemical similarity between the two bodies. It worked well in a few places. “The key feature of the original theory was that it also set the current length of day on the Earth,” she says.

But Stewart, a planetary scientist at the University of California, Davis, and one of the researchers who worked on the new model, adds that the original couldn’t explain everything. “As scientists looked into this theory, the details of the chemistry of the moon and the orbit of the moon didn't match the original model of a Mars-sized object hitting the Earth.”

The moon’s orbit, in particular, presented a major problem. Today, the moon is tilted 5 degrees, but Stewart says the original theory couldn’t explain why this was the case. “In the standard model, the moon should have no tilt compared to the orbit of all the planets,” she explains.

To account for the moon’s strange modern inclination, Stewart’s team took another look at the collision that formed the moon. In their calculations, they ultimately tweaked some key details about the event.

“Instead of having a Mars-sized body, we ask for the impact to deliver a lot of energy, enough energy to mostly vaporize the Earth,” Stewart says. “In addition, we want the impact to give the Earth more spin, so that it would spin about twice as quickly just after the moon formed, compared to the original theory.”

And finally, the researchers reassessed what happened to Earth’s tilt when it was smacked by the assaulting planet. “We start with the Earth tilted way over, so that its tilt from the orbit of all the planets is somewhere between 60 and 80 degrees, instead of the 23 degrees that we see today,” Stewart says.

Matija Ćuk, the study’s lead author, wrote a computer program using these new details to model the moon’s orbit over time. The high-level summary? The researchers think that after the giant impact smacked the Earth sideways, gravity took its course: Tidal pulls between the Earth and the moon gradually moved the moon into its current position.

“When you start with the Earth tilted over, and the moon forming in the Earth's equator, normal tides like what we have today moved the moon further and further away from the Earth,” Stewart says.

But something else would have had to happen to bring the moon’s inclination from over 30 degrees to its present-day 5 degrees — a second transition. Stewart says it took place when the moon was about 30 Earth radii away, about half the distance it is from us today. “In that transition, the orientation of the moon changes, and the tilt of the orbit is lowered to be consistent with where we are today.”

As Stewart admits, the new model of that cataclysmic giant impact is like the old theory in name only. “We basically changed everything,” she says. “We've made it 10 times more energetic, twice as much angular momentum — which gives us the length of day — and we've tilted the planet way over compared to the original model.”

But the new theory does align with key features of our solar system, including the moon’s inclination. And Stewart says it fits with the data that we have — at least for now.

“That's not a proof that our model is correct,” she notes. “It means that we think we're going in the right direction, and we are looking for tests in the model.”

The next step? Testing the theory against the thermal history of the Earth and the moon.

“These events that change the whole orientation of the system deposit heat in the Earth and the moon,” Stewart says. “And that's something we can look for in the rock record.”