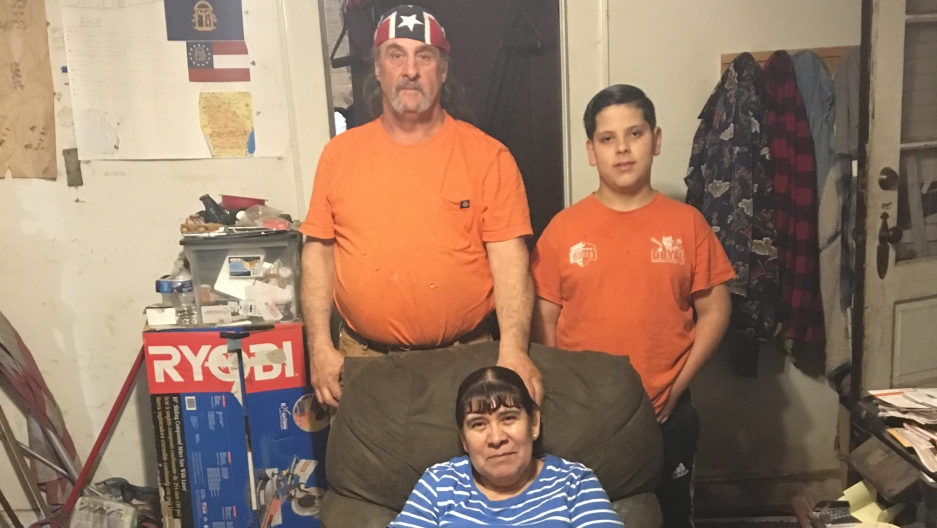 For this family, a Trump administration could have vastly different consequences.

It’s nearly impossible to find Fred Bronson’s house at night. It’s right outside of Raleigh in a suburban neighborhood dotted with bodegas and small restaurants. The road is bumpy and it’s pitch dark.

After yelling a couple of hellos into the night, Fred steps out of the house. He’s a large man dressed in an old T-shirt, head wrapped in a Confederate flag bandana. He invites me in.

Fred's small wooden house is cluttered with books and memorabilia. We sit on the couch. I note that he has a Southern drawl, but he tells me he's actually from New York’s Adirondacks.

He left the Northeast when he lost his job at a wire mill — it was when a lot of jobs in the area disappeared. So he came to North Carolina. The weather was warm, and there was plenty of work.

"You could open up the newspaper ... and there was probably 20 pages of ads of jobs. You had your pick. I was making really good money in 1990," he recalls.

He got a nice house for his family, too. "It was up on top of a hill. Den, kitchen, living room. You know, nice long driveway. But you know. S**t happens, and you lose it."

It was 2007. The Great Recession. "Everything went dead."

Between 1990 and 2000, North Carolina’s Latino population — mostly foreign born — grew by about 400 percent. With lots of competition for work in places like Los Angeles and New York, many immigrants saw opportunity in America’s South. "The gates just opened up. Nobody seemed to stop them," Fred says.

Around that time, Fred says, he asked his boss for a raise, and the conversation rapidly turned ugly.

"I went and talked to the president of the company one time, we’re sitting there talking about the raises. And he says, 'Listen, I have four other people right now. I’m going to tell you the same thing I told them. You want a raise? They’re hiring down the street. I can hire three illegals for what I'm paying you right now.'"

I ask him if he ever thought of changing careers?

"The ones that are here ... the children who were born here, you probably can’t do nothing about," Fred concedes. But, he says, if there’s a crackdown on businesses that hire undocumented immigrants, that’ll push people out. "If you don’t have a place to work, they’ll go home."

You might think Fred is kind of a stereotype. Someone easy to figure out. And then you meet his wife.

Elena. She is from Guanajuato, Mexico. She came here for work. And when she met Fred, she was undocumented: She’d overstayed her visa.

She has a work permit now and cleans hotels. She laughs at the surprised look on my face — they are such an unlikely couple. They’ve been married for about eight years. They have a son. Elena’s family is mostly undocumented. Her father, who is not a citizen, lives with them. Elena — doesn’t like the new president.

"The way he talks about Hispanic people? No. And he wants to build that wall? No. I don’t like that," she says.

"We don’t talk about this at dinner," Fred interrupts. "In this house, my views are my views. Her views are her views. When we’re together, we respect each others' views."

This is hardly the only American family split by the elections. But it is an extreme case. Fred is thrilled — while his wife and her family worry about deportations. Fred doesn’t think that’s going to happen. He just feels there’s a bigger issue at hand.

"Well, we were a strong nation once."

But Elena — she worries about what her future is in that strong country Fred wants back.