Fifty-three years ago, the United States came closer to nuclear war than ever before, or since.

For 13 days in October 1962 — during the Cuban Missile Crisis — America's nuclear arsenal was kept on high alert. There were nuclear missiles just 90 miles from US soil, in Fidel Castro's Cuba. President John F. Kennedy and Soviet Premier Nikita Khrushchev could have launched a nuclear strike within minutes.

With the death of Fidel Castro last week, and the recent thaw in diplomatic relations between the US and Cuba, the Cold War has receded a little further into history. But in a moment when nine nations control nuclear weapons, and a new US president-elect is preparing to take control of the country's nuclear codes, these stories seem newly relevant.

For Joe Andrew, a retired chief master sergeant in the US Air Force, missiles were a part of life from childhood. “I knew just about every rocket that the US had,” he said. Back then, many of America's rockets were pointed at space. This was the era of Sputnik, the Soviet satellite that shocked the United States into expanding its own space program. “We had to keep up with those Russians!” Andrew remembers thinking.

Of course, the competition between the US and the USSR caused not only a space race, but also an arms race. “We had heard about atom bombs ever since I was about 5 years old,” Andrew said. “We knew that if you saw a big flash, don't look at it, because it would burn your eyes.”

Andrew decided to join the military and work on weapons that then seemed cutting-edge: nuclear missiles. His new job placed him on the front lines of the Cold War — a conflict waged not only by diplomats and heads of state, but also by thousands of “missileers.” To this day, a well-trained nuclear corps stands at the ready, should a US commander-in-chief ever order a nuclear attack.

The front lines of the Cold War

When the Cuban Missile Crisis began, Andrew was in Montana, working with Minuteman missiles at Malmstrom Air Force Base. He first learned from the news that Soviet missiles had been installed in Cuba. From that moment, he knew his job was about to change. “I go to bed at night, now, with the president's words ringing in my ears,” Andrew said. “I'm thinking, this is like in the science fiction stories. I don't know what the world's going to be like when I wake up in the morning.”

He woke up early and drove to a nearby airplane hangar where he worked — and right away, he saw a sign of crisis. The base seemed deserted. “There weren't any airplanes out there,” Andrew said. Air Force planes had been flown to civilian airports across the country. “They didn't want all the planes to be in one place, in case a nuclear weapon landed there.” Andrew realized that if a nuclear war broke out, his base would be a key target.

With help from his colleagues, Andrew began driving nuclear warheads across Montana and fixing them to the top of waiting Minuteman missiles. During the long drives between each silo, they listened to updates on the radio. “I remember my thought was, as long as there were words being exchanged between Khrushchev and Kennedy, there's unlikely to be a nuclear strike.”

Images and text for this interactive timeline are courtesy of the John F. Kennedy Library.

The view from the home front

While Andrew was driving around Montana, Gerri Fornes was at home in Ohio. As the wife of a missile launch officer, she experienced the crisis from the home front. “I remember the day it happened, they called everybody to work,” said Fornes, who's now 89. “Everybody went on alert.”

At the time, the Air Force was run by men. Women weren't even allowed to become missile officers. The Fornes family was the oldest in the neighborhood, so Air Force families looked up to them.

“The house was suddenly full of young women who were really nervous and anxious,” Fornes recalled. “And I said, well, I think we ought to play bridge.” While politicians were scrambling to defuse tensions between Washington and Moscow, Fornes was trying to defuse tension in her living room.

For days, the anxiety of the crisis translated into a very personal sense of fear. Fornes didn't see her husband for five days — and at first, she didn't even know where he was. She didn't have security clearance, and his activities were classified. “It was part of the game, you know. Part of the job.”

The Cuban Missile Crisis ended after a flurry of high-stakes diplomacy, when Khrushchev finally agreed to withdraw missiles from Cuba. But Joe Andrew remembers that from that day forward, his job never lost a sense of urgency. The sense of crisis was passed down to future generations. “All we knew about operating and maintaining Minuteman [missiles] was the panic,” he said. “We never got to anything we would call a civilized way to do business.”

A new generation of missileers

But other things did change — like the rule that only men could serve in the Air Force. Gerri Fornes had children, and one of her daughters, Pat Fornes, eventually became a missileer. Growing up, she watched her father practice missile launch procedures. As a teenager, she joined the Reserve Officer Training Corps (ROTC) and began a career in the Air Force.

Then, in 1977, the role of Air Force missile launch officer opened to women. Following in the footsteps of her father, she decided to become one of the first female missileers. “I knew with hard work I could make that happen,” she said. “I was looking forward to being the operator. The 'pointy end.' The one responsible for executing the mission, rather than being a support team.” 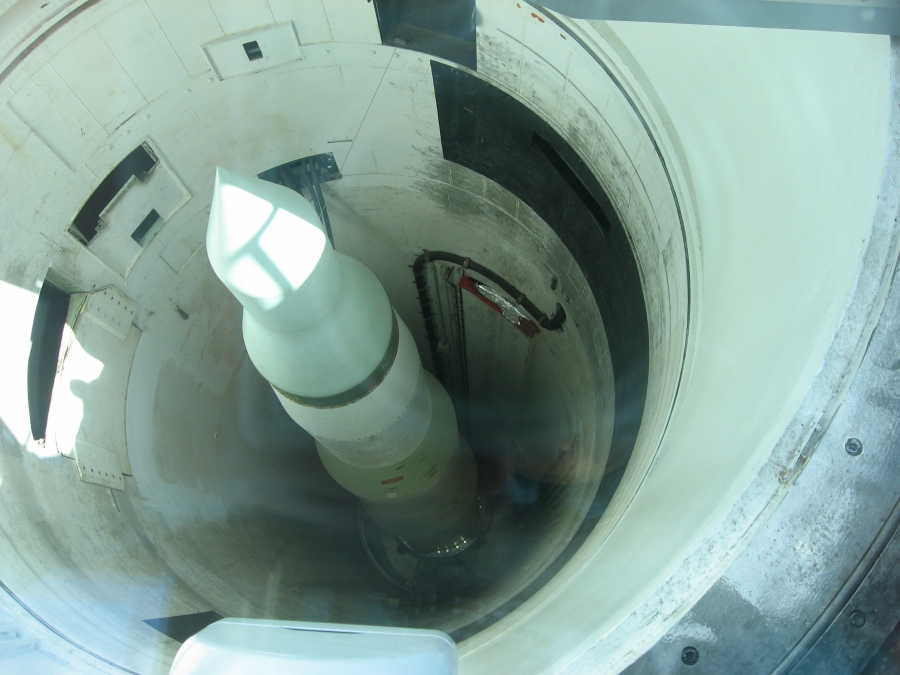 A missile silo at the Minuteman Missile National Historical Site in South Dakota.

The Air Force was not especially welcoming to women at the time. For example, the performance of female officers was scrutinized for any sign that they didn't measure up to their male counterparts. Once, Fornes attended a party with her colleagues and their families. “A squadron commander's wife walked up to me and told me ... nobody wanted me here, and I better behave myself.”

Fornes, now a retired Air Force colonel, remembers being speechless for a moment. “I said, 'Well, ma'am, I have no intention of doing anything but good work while I'm here.'" She felt that she had to keep her cool and prove, through hard work, that she could do the job. “It was just one more thing I had to do to get on with being a good missileer.”

That moment was another step in the evolution of America's nuclear forces. No woman had ever become a missile squadron commander before. “It was just a wonderful day,” the elder Fornes recalled. “I was crying so hard.”

“It was a proud moment for me, and it reminded me once again of the importance of sticking with it,” the younger Fornes said. “Moving forward relies on each of us doing our part. We stand on our sisters' shoulders as we move forward.”

The world's most destructive weapons

Men and women like retired Chief Master Sgt. Joe Andrew and retired Col. Pat Fornes spent day after day working with the most destructive technologies ever created. During the Cold War, Americans had to get used to the idea that two superpowers could live on at the brink of deadly conflict.

But paradoxically, Fornes said, destructive weapons seemed to help keep the peace. That's the basis of “deterrence.” So far, no country has wanted to fire the first shot.

Andrew agreed that even weapons that unsettled many Americans seemed to add stability to the politics of the Cold War. On a personal level, in a job with such huge implications, he said his only option was to think small.

“What your world tends to shrink to, in situations like that, is your little part of it,” Andrew explained. “And I thought, my little part is not going to fail. If the mission goes awry, it shall not be because my part failed. My part is going to work.”

In the years since the Cold War ended, many things have changed. The standoff of superpowers between the US and USSR gradually gave way to much more diffuse security threats, and a much longer list of nuclear-armed countries.

Still, the nuclear age continues. Many of the missile silos where Andrew and Fornes spent their careers are still active, staffed by a new generation of men and women who remain on alert. They're ready to do their part if the time comes. And it's this sense of readiness that really defines the work of America's nuclear forces. Missileers are always ready to use a weapon that they hope their country will never need.