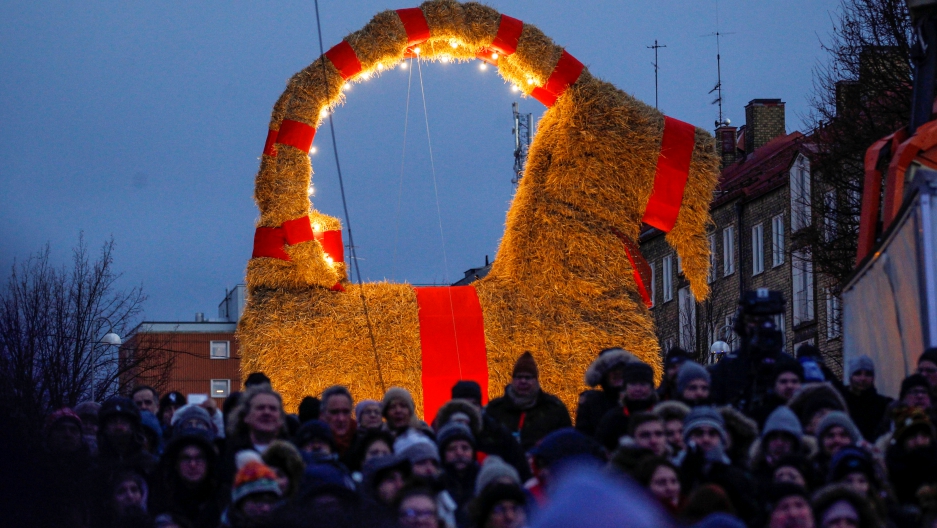 UPDATE: The City of Gälve has placed a smaller, replica of the Gävle goat in the city center as a replacement yule goat for the holiday season. No one has lit it on fire (yet).

In 1966, a Swedish man named Stig Gavlen had an idea that would, in the future, go down in flames — and yet become the one reason people around the world know his hometown.

Gavlen took the Scandinavian tradition of yule goats — tiny, typically made of straw — and made it bigger. Gigantic, in fact. He wanted something marketable, so he got the fire department to create a 23-foot straw yule goat. It came to stand in the city center of Gävle.

And then someone burned it to the ground.

It was a sad day for the goat. And it put in motion a dark tradition.

Now in its 50th year, only 14 goats have lived to see the entire holiday season. The rest turned into a bleating pile of ash, including this year's goat. It cost nearly a quarter-million dollars, and it didn't last a day.

But the goat reached out to its mourners via Twitter.

Oh no, such a short amount of time with you my friends. But I shall rise from the ashes and see you next year again!

In memoriam Gävle goat, here are some of our favorite goat gifs, tweets and images. RIP.

Could this goat below be the Gävlen goat's spirit?

I love my squad pic.twitter.com/jIkxsLZORr