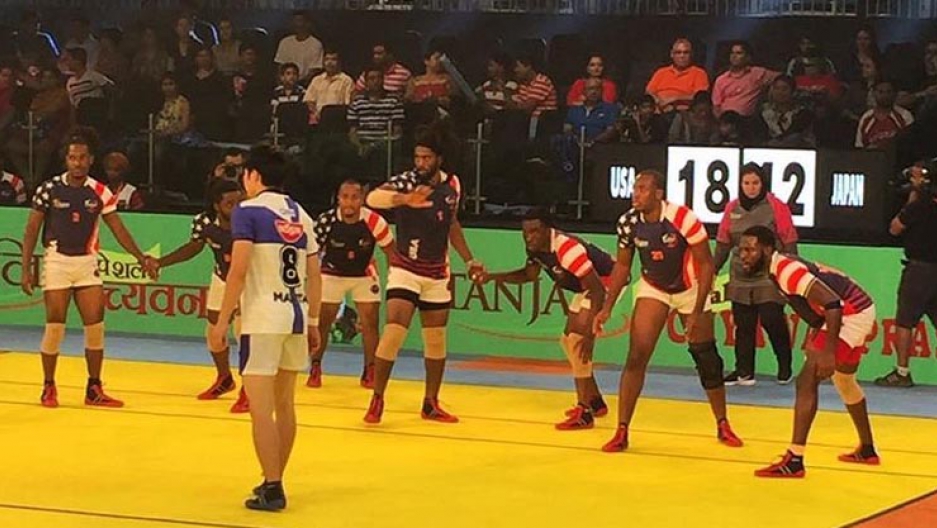 Team USA on the kabaddi mat at the World Cup, in October, is pictured here.

I used to play kabaddi in gym class, and I have to say, we all hated it. The boys preferred soccer or cricket while the girls wanted volleyball or dodgeball — anything but this low-class street sport.

You don’t know kabaddi? It’s kind of a cross between wrestling, rugby and tag. You try to "raid" your opponents' court, and tag members of the other team while chanting the word “kabaddi” over and over — all in one breath. In competition, it’s played on a mat. But kids often play it in the street because the only equipment you need is a sharp-edged stone or brick to draw court lines in the sand.

We’ve been playing kabaddi in India for two millennia. Lately, though, it’s become really popular. In 2014, the Pro Kabaddi league was formed with eight teams.

Now, we’ve begun inviting other countries to the kabaddi mat, including the United States, which sent a team to the Kabaddi World Cup championship in Ahmedabad in October.

“There’s no sport like this where you actually compete and speak at the same time,” says Bismarck Charles, a raider on the US team. “It was a little bit strange, but after practicing, we got on tempo. Now you say it without even thinking about it.”

At the World Cup, all of India’s matches sold out immediately, but even the newbie countries drew in Indian fans, waving pennants and blowing whistles. Some even chanted players’ names.

Nipun Parekh thinks this expansion is very cool. “There are sports like cricket, which is so famous, that we got from the British. So if a traditional ancient sport from India is adopted, why not? It’s a good thing.”

Teams from 12 countries played numerous matches over the two weeks of the tournament, culminating in a nail-biting final. Some were veterans, like Bangladesh, where kabaddi is the national sport.

But some of the national teams had never competed before. The US kabaddi team only got together two months before they headed to India, says team captain Troy Bacon, a musician and audio engineer back in Florida.

“India sent us a coach about three weeks beforehand to just go over the basics with us, and we’ve been practicing in Jacksonville. But literally, our match against Iran was our first match on the mat, playing kabaddi.”

None of the team members knew anything about kabaddi; they just responded to a friend’s social media post looking for interested athletes.

“I looked it up on YouTube, and the first thing I asked was, 'Where’s the football, where’s the basketball, what type of ball is involved in this sport?'” says the co-captain, Ben Marcelus.

Just for the record, there is no ball.

Many of them played college football. And they picked up kabaddi pretty quickly. They also got a free trip to India out of it, courtesy of the International Kabaddi Federation. But player and team organizer Kevin Caldwell says there’s something serious for them here, too. Almost all of the US players are African American.

"It’s not just coming on this mat and playing a sport and trying to win," Caldwell says. "This is a leap of faith to show the world that, 'Hey, there are black men in America, and we have something to say and things to do, and we have value to add.'"

And they get to be pioneers of a sport that’s poised to take off, says Bismarck Charles. “We’re going to be the first to start this sport off, pave the way for other Americans. I couldn’t say no to that!”

The tournament was broadcast on ESPN. But in case you didn’t catch it, India won the championship — as it has in every previous Kabaddi World Cup.

The American players went home without a trophy, but they say they’re not discouraged. They’re planning on coming back next year.