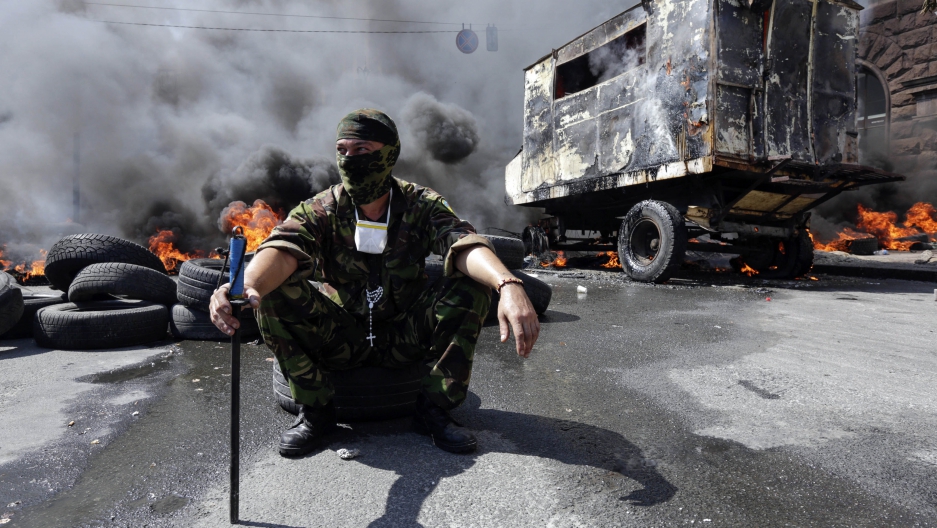 A protester sits in front of burning barricades during clashes with pro-government forces at Independence Square in Kiev, Ukraine on Aug. 7, 2014.

Ukraine's protests that kicked off three years ago were supposed to change the country for the better.

But corruption is still rampant. No high-level officials — current or former — have been prosecuted. The economy is only beginning to recover from its post-revolution nosedive, and around three-quarters of Ukrainians consider themselves poor. Fighting against Moscow-backed separatists, which broke out after the revolution ousted President Viktor Yanukovych, grinds on in the east.

To top it off, the US election of Donald Trump, along with a rise of nationalist movements across Europe, makes many Ukrainians worried about losing international support in their advance toward a cleaner, more peaceful democracy.

“If [Western countries] care about international law, and basically the existing world order and the territorial integrity of countries, then sanctions and international pressure are the only way,” says Alya Shandra, a civic activist who participated in the revolution from its early days.

Under President Barack Obama, Washington led the charge in sanctioning Russia for its military meddling in Ukraine and annexing Ukraine's Crimean Peninsula. Vice President Joe Biden was the administration’s point man for all things Ukraine-related, and he visited Kiev numerous times.

Trump, on the other hand, has praised Russian President Vladimir Putin and said he wants to patch up relations with the country. And he has also shown no interest in supporting Ukraine.

Even more worrying for other Eastern European leaders is Trump’s apparent distaste for NATO, which they see as the only bulwark against a resurgent Russia.

Vice President Joe Biden has played point man for the US government's talks with Ukraine's President Petro Poroshenko. Here they were at the parliament in Kiev on Dec. 8, 2015.

Still, officials and other observers in Ukraine are trying to stay positive.

Some insist the US president-elect couldn’t possibly muster the support to overturn Washington’s policy on Ukraine, especially given the Republican Party’s long, hawkish track record on Russia. If he does, it could have serious global consequences.

“The rejection of economic sanctions against the aggressor state [Russia] would mean the total collapse of US foreign policy and the end of its dominance on the world stage,” Anton Herashchenko, a prominent lawmaker and an adviser to Ukraine’s interior minister, wrote earlier this month.

Others are seriously concerned about populist movements in other parts of Europe — movements that openly sympathize with the Kremlin’s hard-nosed politics, denouncing globalism and integration. The recent election of two pro-Russian leaders in Bulgaria and Moldova, both roughly in Ukraine’s neighborhood, definitely hasn’t helped.

Mykhailo Pashkov, a foreign policy analyst at the Razumkov Center think tank in Kiev, says Ukraine should focus on building lower-level relationships with advisers and other aides in the Trump administration, in order to compensate for their future boss’ apparent lack of interest or experience.

“Ukraine will have to face down Russia in a different context, and in a different atmosphere,” he says. “It goes without saying that it will be much more difficult.”

Helping Ukraine stand up to Russia isn’t the only way the international community has pitched in.

Washington and Brussels have tried to push for change in Ukraine through a combination of political pressure and economic incentives. Crucial loans from the International Monetary Fund came with the condition that the government enact tough economic reforms and stamp out corruption.

Ukraine has actually racked up some achievements, like slashing its energy dependence on Russia and launching new anti-corruption organizations. In return, a deal allowing Ukrainians to travel in the European Union without visas is expected to take effect early next year.

It was Yanukovych's refusal to sign an EU agreement that first sparked the protests three years ago.

Back then, many Ukrainians felt his klepto-regime paid lip service to European integration while stifling democracy at home and cozying up to Russia. That’s why visa-free travel to Europe, approved by the EU in November, is something of a symbolic victory for the integrationists.

There’s still a long way to go, however.

Shandra, who edits a website that follows Ukraine’s post-revolution reforms, says Ukrainians are just beginning to understand that changing their country isn’t only about kicking out a corrupt leader. It's also about working together to lay a lasting political and economic foundation for the future.

“It’s the start of a very long process,” she says.