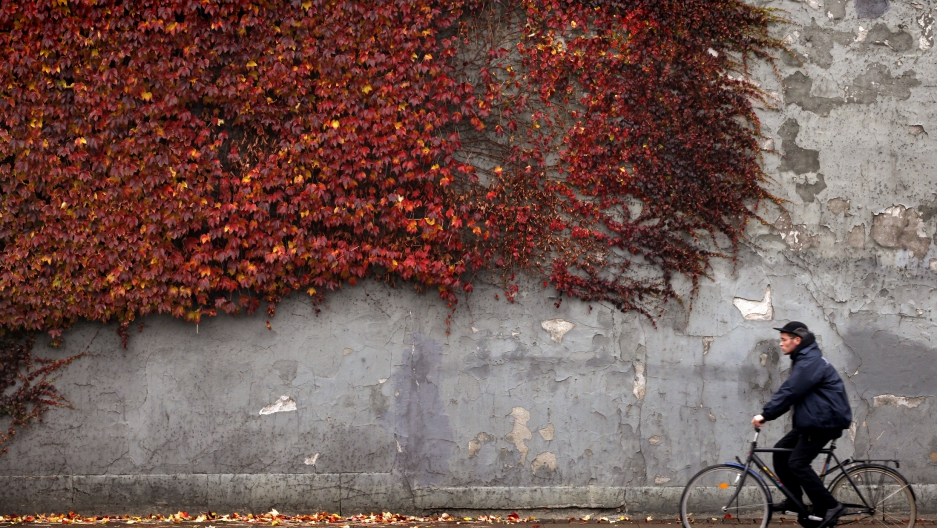 A cyclist rides past autumn-colored ivy climbing the wall of a building in downtown Copenhagen on Nov. 2, 2010.

The city of Copenhagen is known as a place where bicycles rule.

But now they really rule.

The capital of Denmark reached a milestone last month: More people now ride their bikes downtown than drive. This didn't happen by magic or from public goodwill. The process could actually be a model for other cities to follow, as traffic and population increase.

It's good news to many in government. "I was very happy, obviously," says Morten Kabell, the head of transit for the city of Copenhagen. "On the other hand, it confirmed what we already knew. That if you build it, people will use it."

In other words, if you build bicycle infrastructure, then people will ride their bikes. Copenhagen has been doing this for the last several decades.

“Copenhagen municipality has been carrying out manual traffic counts at a number of city center locations since 1970, when there were 351,133 cars and 100,071 bikes,” reports the Guardian’s Athlyn Cathcart-Keays. “In 2009, the city installed its first electric bike counter by City Hall, with 20 [counters] now monitoring traffic across the city. Copenhagen’s efforts to create a cycling city have paid off. Bicycle traffic has risen by 68 percent in the last 20 years.”

And now, bicycle traffic beats car traffic in the city center by more than 10,000 trips. The next goal is for half of all downtown trips to be by bicycle by 2025. Currently, about 41 percent of commutes are by bike. So, Copenhagen will most likely beat its goal.

But at what cost? There are fancy bicycle bridges and bike-only sidewalks on the streets. This can’t be done on the cheap, right?

Kabell believes the results in Copenhagen can be replicated elsewhere. And in many ways, Copenhagen resembles American cities. There are wide streets and a mix of residential and commercial buildings.

But the goal isn’t a car-free society. That’s just not possible. People with disabilities need them, as do merchants and others. “Obviously, we will always have cars,” he says. “But the question is, ‘How many cars can we have?’ Can we actually create a city where we have the greenest possible transport solution by having much more bicycles than we have cars? Yes, I believe that can happen, and we are well on our way in Copenhagen.”