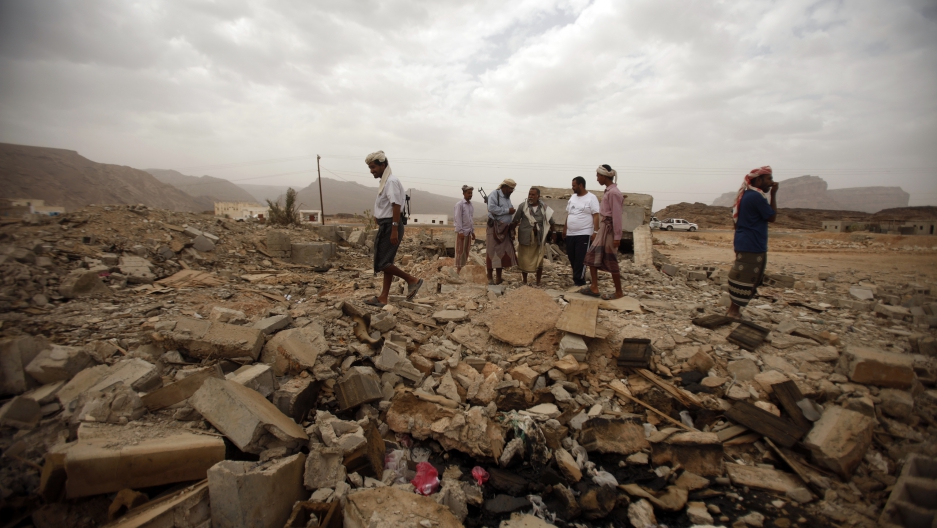 Tribesmen stand on the rubble of a building destroyed by a US drone airstrike, which targeted suspected al-Qaeda militants in Azan of the southeastern Yemeni province of Shabwa on Feb. 3, 2013. Abdulrahman al-Awlaki, the son of slain US-born cleric Anwar al-Awlaki, and six al Qaeda militants were killed in a strike on this building on Oct. 14, 2011, tribal elders said. Abdulrahman al-Awlaki was 16 years old and also a US citizen. His father had been killed in a drone strike two weeks earlier, in September 2011.

A new book, "The Drone Memos," allows readers to sift through once-secret documents detailing aspects of the Obama administration’s practice of targeted killings of terrorism suspects.

“You look at those documents, and you realize immediately this is a practice we have institutionalized and entrenched and normalized,” says Jameel Jaffer, the former ACLU lawyer who led the battle to obtain the papers.

“There was a time when the US would have characterized many of these as extrajudicial killings, as unlawful, even as assassinations.”

Jaffer, who edited the collection — you can read an excerpt from the book here — joined the ACLU in 2002 and worked for years on key post-9/11 legal cases on issues like detention and interrogation, as well as targeted killing. When US citizen Anwar al-Awlaki was put on a so-called government “kill list” in 2010, Jaffer went to court to try to compel the government to reveal its evidence and rationale.

“There were two questions,” says Jaffer. “What standard applies? In what circumstances does the government have the lawful authority to carry out the killing of an American citizen thought to present a threat to the country.

And the other question, equally important, was, who decides? Even if the president or the executive branch decides in the first instance, shouldn't some other neutral decision maker review the evidence either before or after somebody is killed?”

The case was dismissed. Awlaki was killed by a drone strike in 2011. Then, in a stunning development, his 16-year-old son, Abdulrahman al-Awlaki, also an American citizen, was killed in a different strike two weeks later, along with another American citizen, Samir Khan.

The ACLU attempted a second legal challenge, after the fact. That case was also dismissed.

“They essentially held that the question of whether any particular person was a lawful target was a question committed to the political branches — in other words, a question that the president and Congress got to decide, that the courts had no role to play.”

“I don’t really see what content is left to the due process clause, to the Fifth Amendment, if the government can carry out the killing of an American citizen without ever having to account for its actions to any court. There's a big difference between allegations and evidence, and that seems to have been lost."

The ACLU didn’t prevail in those cases but public pressure for more accountability did lead to some changes. The Obama administration gradually released more information about the program and adopted more restrictive rules for approving targets and strikes. (David Cole’s essay, “The Drone Presidency," offers more background on the evolution of President Obama’s drone program.)

Jameel Jaffer, now director of the Knight First Amendment Institute at Columbia University, is of two minds about the way the Obama administration adapted the program.

"Over time, there was a growing recognition on the part of at least some people in the administration that the drone campaign as it had existed needed to be reined in in some ways, and they did adjust the rules at the margins, and they created an entire bureaucracy to regularize the practice of targeted killing," he says. "Depending on your vantage point, you could see that as a positive thing or an extremely chilling thing.

“I think that President Obama has been a great president in many different ways, and I think that the United States is a more humane and a more just place now than it was when he took office. But I think the decisions his administration made around this set of policies were shortsighted.