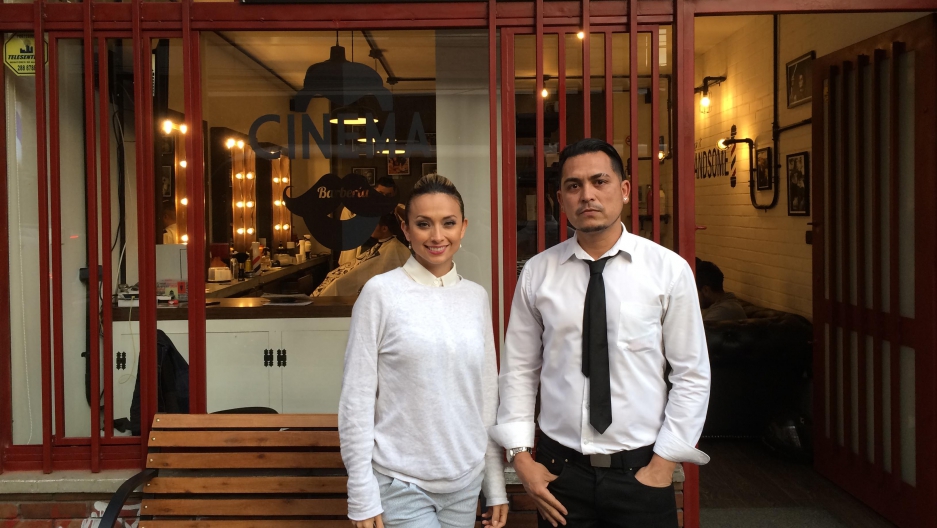 Gustavo Canduri (r) owned a small business back in Venezuela. Now he's working at a barbershop in Bogotá owned by Camila Rincón (l).

The first thing you notice is the restaurants.

Gustavo Cruz, a Venezuelan who runs a restaurant with his father in the Colombian capital Bogotá, says there’s a boom of Venezuelan areperas in the city.

Areperas are the folks who make and sell arepas, corn flatbreads popular in both Colombia and Venezuela, but prepared differently in each country.

And now Bogotá is awash in Venezuelan areperas — a testament to the recent influx of Venezuelan migrants and their visibility in the city’s public life.

“Ten years ago there was only one arepera. Now, they are everywhere,” Cruz says. 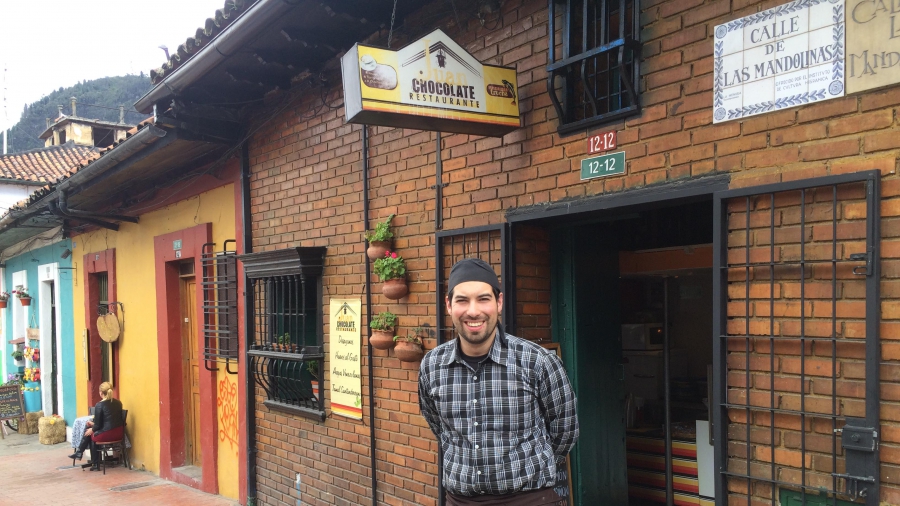 Gustavo, a Venezuelan, runs a restaurant in Bogota. “Ten years ago there was only one [Venezuelan] arepera [in Bogota]. Now, they are everywhere,” Cruz says.

Cruz says Venezuelan immigration to Colombia has increased a lot in recent years. According to official figures, between 2010 and 2015, the number grew by 40 percent. And that figure only accounts for those entering the country with legal papers; many more Venezuelans cross the porous border and stay.

It used to be the other way around.

In the 1970s and '80s, many Colombians fled violence and economic stagnation and headed to Venezuela, which was experiencing an oil boom. Up to 4 million Colombians made the move during that time.

Now, that population flow has reversed.

Gustavo Canduri is a Venezuelan who arrived in Bogotá less than a year ago and got a job at a barbershop. He says his family had to leave their country.

Canduri’s wife had a pregnancy complication and the hospitals in their home of Maracaibo were not equipped to treat her.

“There was no medicine because of the shortages Venezuela is going through,” Canduri says.

Doctors told them that they could not guarantee his wife’s or the baby’s life.

Once in Colombia, his wife was able to get the medical treatment she needed, and their son was born healthy in a Bogotá hospital last March.

Canduri says he owned a small business back in Venezuela, but it’s hard to start all over. But many Venezuelans are doing what he’s done.

“My country is going through a very sad time,” he says. “The government is killing us with hunger.”

Overall, he says, Colombians have been kind, and he’s grateful. Camila Rincón owns the barbershop where Canduri works.

“I have no problem hiring Venezuelans,” she says. “I think they come to do honest work.”

Rincón says it’s hard to read in the news about what’s happening in Venezuela these days. But she’s happy to help out her neighbors.

“And that’s life. You never know how it’s going to turn out. Today we do it for them, tomorrow they might do it for us," Rincón says.

She says she thinks most Colombians feel the same way about the new wave of migrants from next door — at least for now.

“Maybe if too many come, problems like unemployment might get worse, maybe crime will go up, and things could get more complicated. But we can’t generalize,” she says.

Juan Camilo Díaz, an Uber driver in Bogotá, says Colombia has been “invaded” by Venezuelans. But he’s OK with that.

“I think it’s time for us to return the favor,” he says. “When they had a solid economy they received people from everywhere and they helped many Colombians get ahead.”

When asked what if more Venezuelans start driving Uber cars and become his competition, he said they have their own families to feed.

“It would be mean and inhumane to not let them be my competitors,” he says. “They have a right to work and eat.”