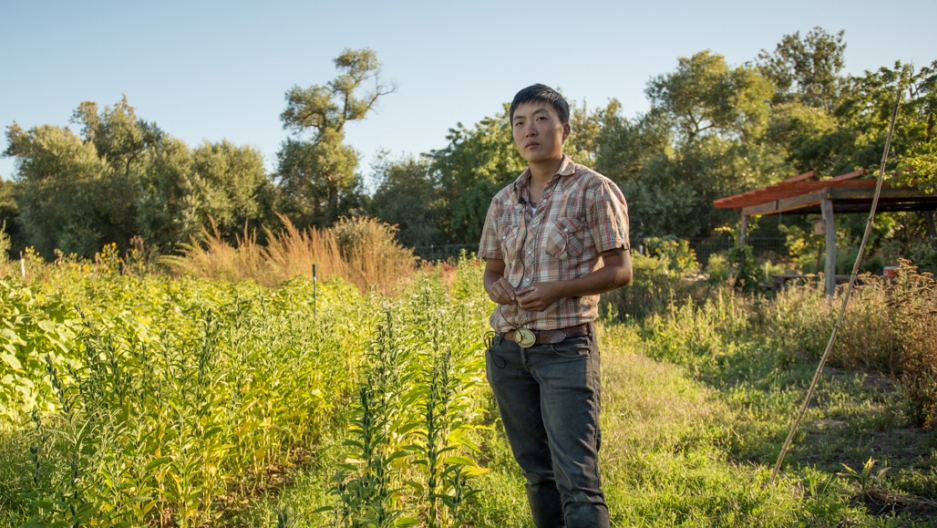 Kristyn Leach on her Sunol, California farm, Namu. “There is significance to all this in terms of that sense of pride and connectedness,” she says.

Along a dusty dirt path are rows of Korean chili peppers, Korean sesame leaves and Napa cabbage. Next to the plants are flattened burlap sacks, covered with chilis drying in the sun.

But this isn’t Korea; it’s Sunol, California, a rural region of Alameda County. I’m at Namu, a tiny acre-and-a-half farm devoted to cultivating Korean vegetables. The owner, Kristyn Leach, shows me her plot of land as she points out the different varieties growing here.

Leach didn’t grow up knowing about her Korean heritage. In 1982, she was adopted from Daegu, South Korea, by a family in Long Island, New York. She was just one of the estimated 150,000 Korean children who have been adopted by families in the US. She grew up like a typical American kid — eating mac and cheese, hot dogs and spaghetti.

It wasn’t until she moved to the Pacific Northwest for college that she first encountered Korean cuisine. There, she saw a community garden with ajummas, older Korean women, growing perilla, a Korean herb.

“Unbeknownst to me at the time, it is just sort of one of the ubiquitous plants and ingredients in Korean food,” she says.

By the time she moved to California, she was growing perilla herself and supplying the herb to local restaurants like Namu Gaji, in San Francisco. By 2011, she leased the land for her own farm and formed a partnership with Namu Gaji.

Food has always played an important part in Leach’s identity. She doesn’t talk much about being a Korean adoptee, but when she does, her comments are careful and considered — and they often involve farming.

Three years after she started Namu, Leach made a trip to Korea for the first time since she was adopted. She met face-to-face with local farmers and activists there, and discussed preserving native Korean seeds.

Leach says she doesn’t know if she will ever go back to Korea, or if the Korean farmers she met will still have their farms. But she understands the importance of being rooted in the land.

“There is significance to all this in terms of that sense of pride and connectedness,” she says.

And her farm serves as a draw for other Korean-Americans, including me. She says people who have heard of the farm by word-of-mouth often email her or ask to visit.

“People I didn’t know would offer to share seeds with me,” she says. “People felt like [they] had a place where they could put their own story.”