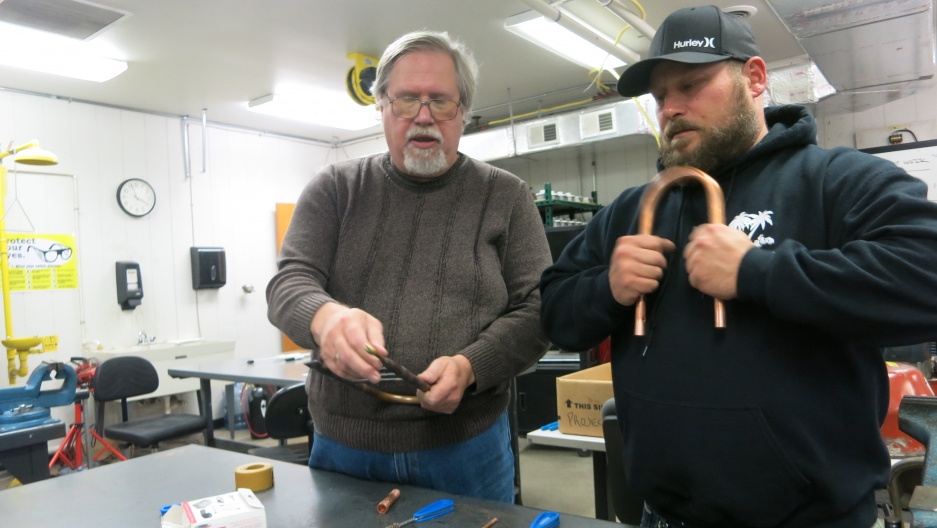 Let’s say you’re a factory worker in Michigan, Ohio or Indiana. You’ve worked for the same company your whole life. You’re 40, maybe 50. Then, the factory closes and moves to Mexico or China or wherever. What do you do?

The 2016 US presidential election was partly about that question. Donald Trump said he’d bring the jobs back. Hillary Clinton argued for tens of billions of dollars to retrain laid-off workers.

It's an old strategy. Three decades ago, American steel mills were shutting down and tens of thousands of workers were losing their jobs. So, the United Steelworkers union and steel companies came up with an idea: establish centers to teach classes in skills development to workers. You know, create a backup plan.

Today, steelworker Travis Keppen is taking an HVAC course in Burns Harbor, Indiana, learning how to repair cooling and heating systems. By day, he works across the street at the ArcelorMittal steel mill. Keppen says he’s taking this course after his shift because he likes learning, and also because he’s worried about the future of his job.

“When I actually got hired in over here, it was one of my big concerns,” says Keppen. “My family has worked at this mill for generations now. And my family went through some hard times. So I was worried about it, definitely.”

His teacher, Dennis Matney, knows firsthand that this worry is justified. Matney used to work at the nearby mill.

Nearly 22 years ago, "they let me go. I went to US Steel Gary Works, spent a month and a half there, I like to say that’s a good length of time for a US steel career. Then I went to the old Bethlehem plant,” says Matney.

At that third steel job, Matney found out about career development courses, studied HVAC and eventually became an instructor. The classes are free. As part of a union contract, steel companies invest 15 cents toward classes for every hour an employee works.

Courses are taught at the Institute for Career Development, which has 57 locations nationwide. They offer a range of subjects from paralegal studies to locksmithing to pharmacy technician training. (There are also ample class choices simply for fun, in subjects like painting, line dancing and woodworking.) 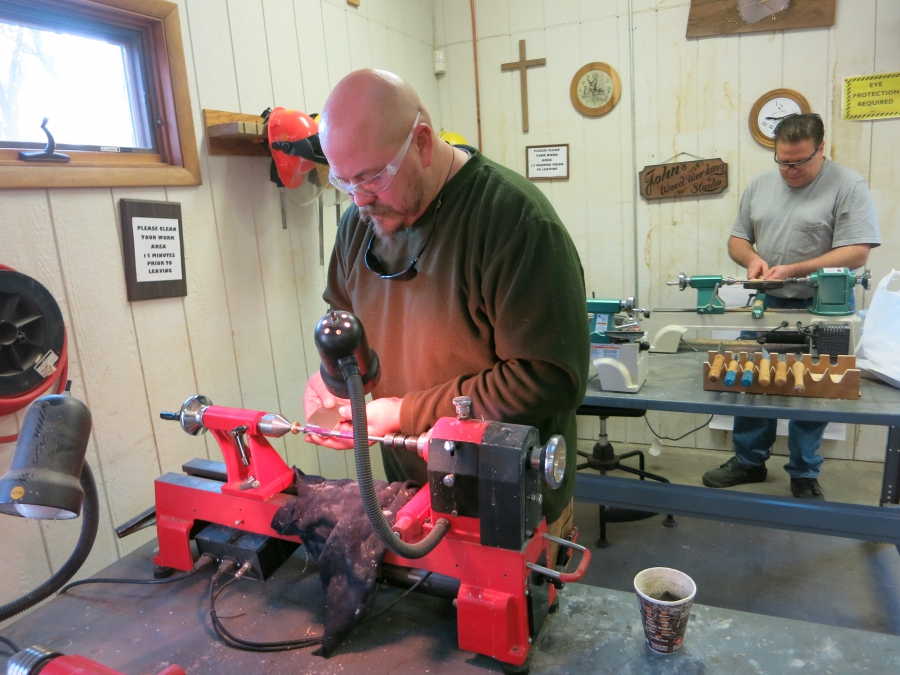 Steelworkers at a woodshop class in Burns Harbor, Indiana. Employees can take classes for personal enrichment as well as to learn new job skills.

The 64-week HVAC class provides certification to work in the field.

“Always a good time to be in HVAC,” says Matney. “The Bureau of Labor Statistics had projected an increase of 14 percent as far as heating and air conditioning jobs from the years 2014 to 2024. I know that because I researched that because I put that into the flier for the class.”

HVAC might be in demand, but steelworkers would take a hit with that career transition. “It’s tough to replicate a mill salary because a lot of guys make six figures because they live out there,” says Matney. Translation: Many steelworkers work a lot of overtime.

Often, though, people are hesitant to train for a new career, especially when they're already working. About 200 mill workers in Burns Harbor enrolled in a training course here last year — that’s only about 5 percent of eligible employees. That's a small number, but put yourself in the shoes of a manufacturing worker in his 40s or 50s.

“The outcomes have been not great,” says Scott Paul, president of the Alliance for American Manufacturing. “A lot of these folks never will find a full-time job again, and if they do, it’s paying dramatically lower wages and with lower benefits.”

Clinton had wanted to invest heavily in new jobs — $30 billion for struggling communities for job training and locally driven economic development. That idea never really caught on in hollowed-out manufacturing towns in the Rust Belt.

“We’ve seen that out of the Democrat playbook for the last 40 years,” says Steve Toprani, a Republican and former District Attorney for Washington County in western Pennsylvania.

Toprani says “job retraining is fine,” in theory, but manufacturing workers often get pushed out of the middle class and work in service-sector jobs.

It wasn’t just Republicans dismissing Clinton’s proposal. Democrat Nancy Horvath used to work in a factory. Now, she’s a parking meter attendant in Monessen, Pennsylvania. She’s seen laid-off co-workers invest time and sweat in career retraining, but there were no jobs in the end.

“What good is a doughnut if you don’t have coffee to dunk it in?” she asks.

This year, Horvath switched parties and went with Trump and his promise to quickly bring back the old jobs.

“I’m hopeful,” says Horvath. “No one has mentioned bringing back any manufacturing until he did. And this area, it’s sad, it’s sad to remember what it was when we were kids growing up, fighting people on the sidewalk, it was so crowded. And now there’s nothing here.”

This nostalgia and skepticism about retraining programs is understandable, but people need to get past it, says Stephen Herzenberg, the executive director of the liberal-leaning Keystone Research Center in Harrisburg, Pennsylvania. He says the Rust Belt needs a new economic future, one that starts with money for job training.

“Money is part of that, but it’s only very much the beginning,” says Herzenberg. “We definitely think part of it is being creative about if you’re going to create renewable energy jobs or if you’re going to have solar collective farms. You’ve got to try to push more of that. And it’s going to take time for people to be convinced that there is an alternative to going back to more coal.”

Trump needs to be sold on that narrative, too. Maybe he can bring back coal jobs, maybe he can’t. Market economics say it’s unlikely, as natural gas prices keep falling and push out coal. Also, climate scientists warn that investing in more coal would have disastrous implications for climate change.

All this is not to say that American manufacturing is dead, far from it. It’s still a major part of the US economy, and those in the industry are calling for more investment in the next wave of manufacturing.

"I’m not nostalgic for 1950s steel, but I’m really optimistic for 21st-century steel,” says Scott Paul. “Manufacturing is going through an evolution that people call 'Industry 4.0,' and that’s going to take a different set of skills and training.”

Back in Indiana, steelworker-turned-HVAC-instructor Dennis Matney says coal workers and everybody in manufacturing should invest some time in more education.

“I think that you can resist change all you like. But it’s going to happen regardless. You might as well get with the program.”

That can be a tough message to take — that life as you know it, and have known it for generations, is ending. And, as Clinton learned the hard way, it’s not one that a lot of voters wanted to hear. 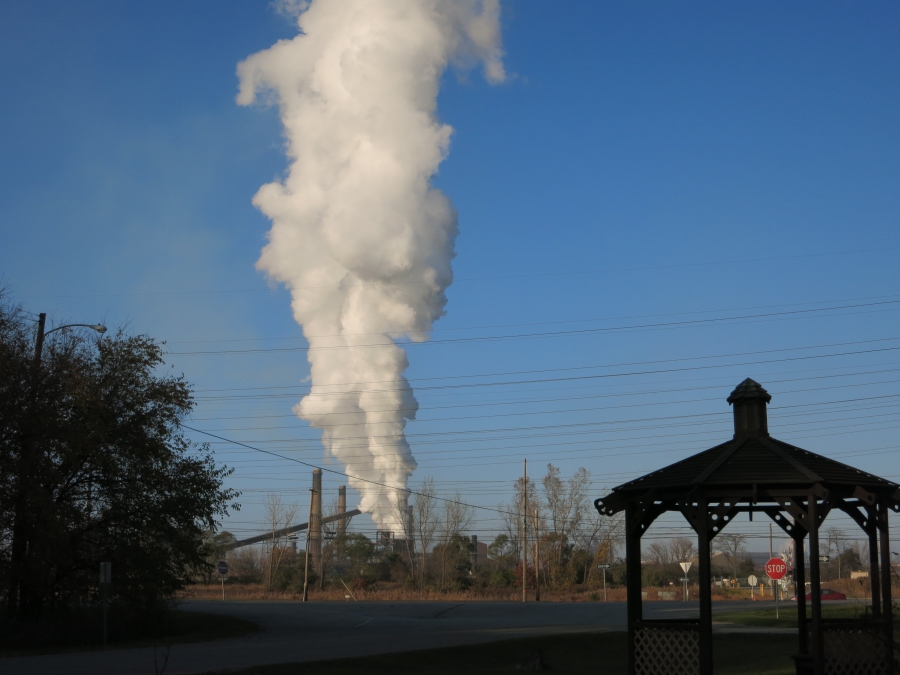 The ArcerlorMittal steel mill is just across the way from classrooms at the Institute for Career Development, Burns Harbor, Indiana.