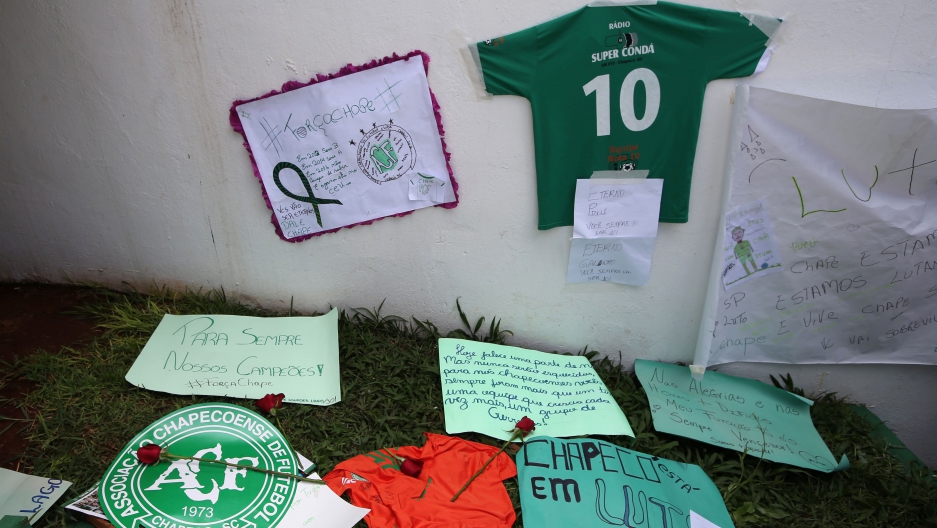 Flowers and messages are seen next to a Chapecoense soccer team flag in tribute to their players in front of the Arena Conda stadium in Chapeco, Brazil, on Nov. 29, 2016.

A plane carrying a Brazilian soccer team crashed in the mountains in Colombia, killing an estimated 75 people while six survived, including several players, officials said Tuesday.

The LAMIA airlines charter declared an emergency at around 10 p.m., reporting it had suffered "electrical failures," and crashed a short time later near the city of Medellin, officials said.

The plane was carrying members of Chapecoense Real, a Brazilian soccer club that had risen from obscurity to reach the Copa Sudamericana finals, which were set for Wednesday against Atletico Nacional of Colombia.

"The pain is terrible. Just as we had made it, I will not say to the top, but to have national prominence, a tragedy like this happens. It is very difficult, a very great tragedy," the club vice president, Ivan Tozzo, told Globo SportTV.

In all, there were 72 passengers and nine crew on board the British Aerospace 146.

Soccer stars including Argentina's Lionel Messi and retired legend Diego Maradona led tributes to the players and messages of mourning.

"Sadly those lads, who were on the way to becoming a force in football, took the wrong plane," Maradona said.

The civil aviation authority said six of the 81 people on board were known to have survived the crash, which left the plane's wrecked white shell plastered over a hillside.

A spokesperson for the authority told AFP that goalkeeper Marcos Danilo Padilha, 31, died after being transferred to a hospital from the remote site of the crash.

Danilo's last-minute save in the semifinal had ensured the team made it through to the Copa Sudamericana final.

Another player, Helio Hermito Zampier Neto, survived, Colombia's disaster risk management agency said, adding, "The possibility that other people will be found alive has not been ruled out."

Another of the survivors was Alan Ruschel, a 27-year-old defender for the Brazilian team, the head of Colombia's civil aeronautics agency, Alfredo Bocanegra, told reporters.

Radio Caracol said player Jakson Follmann also survived and was taken to the hospital, along with a flight attendant and a journalist. The sixth known survivor was a member of the flight crew.

Brazil's National Civil Aviation Authority said the team flew on a commercial flight to Santa Cruz in Bolivia, where they switched to a Lamia charter flight bound for Colombia.

The airport statement said the plane's crew "declared it had electrical failures."

It went down about 30 miles from Medellin, Colombia's second-largest city, in an area called Cerro Gordo.

Elkin Ospina, the mayor of the town of La Ceja near the crash site, said the mountainous terrain was some 10,800 feet above sea level and very difficult to access.

Rescuers carrying stretchers had to hike for more than half an hour to reach the site.

On its Twitter account, the airport said a plan to use an air force helicopter had to be shelved because of bad weather in the area.

Three British investigators are flying to Colombia to assist the probe into the crash of a British-made plane.

The investigators are expected to arrive in Medellin on Wednesday, Britain's Air Accidents Investigation Branch (AAIB) said in a statement on Tuesday.

South American soccer confederation CONMEBOL said in a statement the match was suspended until further notice.

"We are in contact with the authorities and are waiting for official reports."

A source close to CONMEBOL told AFP it was "very unlikely" that the final would ever be played.

Nine team members did not travel to Colombia.

Chapecoense and Atletico Nacional were supposed to have faced off in Wednesday's first leg of the final of the Copa Sudamericana, the second most prestigious club soccer tournament in South America after the Copa Libertadores.

Chapecoense had reached the final after completing a victory on away goals last week over Argentinian side San Lorenzo in the semifinals.

Chapecoense is widely regarded as one of the minnows of Brazilian club soccer, having been founded relatively recently in 1973 in the city of Chapeco in southern Santa Catarina state.

After decades in the lower divisions, Chapecoense returned to Brazil's top flight Serie A in 2014 for the first time since 1979. The club finished in the 14th spot in the 2015 edition of the 20-team championship.

Two weeks ago, the same plane was used to fly the Argentine national team with Messi on board to San Juan, Argentina, for a World Cup qualifying match.

Atletico Nacional said on its Twitter account it "profoundly laments and expresses solidarity with @chapelcoensereal for the accident that occurred."

The mayor of Chapeco, Luciano Buligon, described the city's despair.

"We have moved from a dream to a true nightmare," a tearful Buligon told TV Globo.