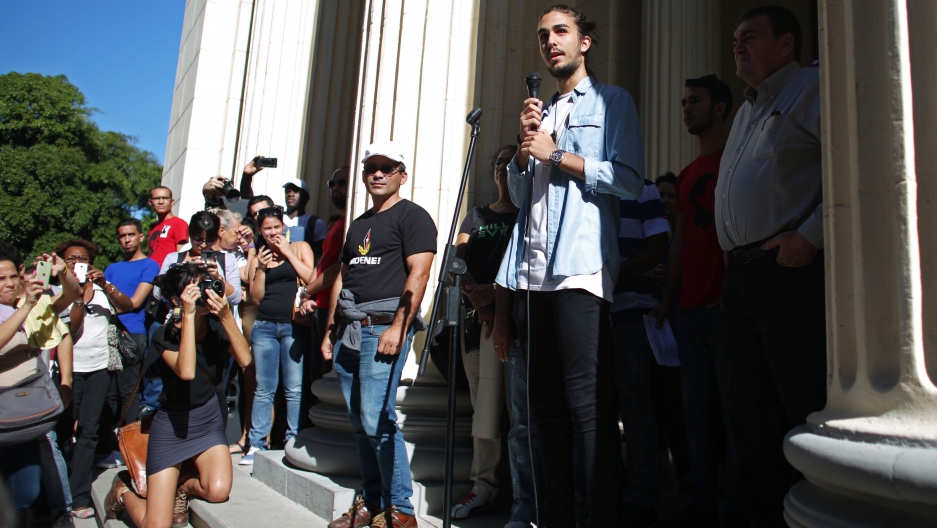 Antonio Castro, grandson of Cuba's late President Fidel Castro, speaks to students of Havana University as they march to Revolution Square in Havana, Cuba, on Nov. 28, 2016. The small sign reads, "Thanks for everything Commander."

Hundreds of thousands of Cubans swarmed Havana's iconic Revolution Square in a tearful and nostalgic tribute to Fidel Castro on Monday, kicking off a weeklong farewell to the divisive Cold War icon.

Long lines of mourners entered the towering monument to independence hero Jose Marti, filing past a black-and-white picture of "El Comandante" as a young, black-bearded revolutionary carrying a rifle.

Many walked by silently, clutching flowers, some took pictures with their phones and others sobbed uncontrollably as they looked up at the portrait flanked by white roses.

But his ashes were not put on display, surprising many who had hoped to see the urn holding the remains of their hero.

The memorial began with a salvo of 21 cannon shots from a colonial fort overlooking Havana harbor.

Lourdes Rivera, a 66-year-old retired civil servant, sat on a curb and cried as she waited for her turn to enter the monument.

"He's the father of all Cubans. My dad was my dad, but he couldn't give me what [Castro] gave me. He gave me everything. My freedom. My dignity," she said.

For 36-year-old university professor Pedro Alvarez, "we know that our comandante has become immortal."

Castro, whose 1959 revolution toppled a dictatorship with the promise of bringing justice and equality to the Caribbean island, was a towering figure of the 20th century.

While some saw him as a socialist hero who brought education and free health care, others labeled him a "tyrant" who caused economic hardship and sparked an exodus of Cubans seeking a better life.

In a sign of changing times, US President Barack Obama visited Revolution Square during his historic visit to Havana in March, when he became the first US leader since 1928 to step foot in Cuba, a nation of 11 million people.

In 2014, Fidel Castro's brother and successor, Raul Castro, announced a diplomatic detente with Obama, who has lifted some trade barriers. On Monday, the first regular flights from the United States to the Cuban capital in half a century resumed.

But US President-elect Donald Trump renewed a threat to end the thaw unless Havana makes concessions on human rights and opens up its economy.

"If Cuba is unwilling to make a better deal for the Cuban people, the Cuban-American people and the US as a whole, I will terminate deal," he said on Twitter.

"He can break relations. We have lived without them, and we will keep living."

Raul Castro has enacted gradual economic reforms. But he has firmly resisted any changes to the communist island's political system.

Fidel Castro handed power to Raul Castro in 2006 after undergoing emergency intestinal surgery. Fidel Castro's cause of death on Friday at age 90 has not been disclosed.

Castro, who came to power as a cigar-chomping 32-year-old in combat fatigues, survived more than 600 assassination attempts, according to aides, as well as the failed 1961 US-backed Bay of Pigs invasion and the 1962 Cuban missile crisis.

Dissidents who were repressed by Castro's regime for years said they were happy that the "dictator" had died, but called off regular demonstrations on Sunday out of deference to those in mourning.

"We're going to remain calm, even if [Castro] is the main culprit for the misery and lack of political rights in Cuba," said veteran dissident Jose Daniel Ferrer.

Once the nine-day period of national mourning is over, "we will continue fighting the system he created," he said.

In Miami, where so many Cubans flocked in the past decades to escape Castro's policies, Cuban-Americans celebrated his death with street parties throughout the weekend.

After two days of commemorations in Havana, Castro's ashes will go on a four-day islandwide procession starting Wednesday.

They will be buried on Sunday in the southeastern city of Santiago de Cuba, the heartland of Castro's uprising against US-backed dictator Fulgencio Batista.

Castro could do no wrong in the eyes of the mourners at the Revolution Square — the same place where the late leader would often rail against the US "empire" during his legendary, marathon speeches.

Many were dressed in state uniforms — schoolchildren, soldiers, veterans, doctors and customs officers.

For them, the country's economic problems stem from the decades-old US embargo.

"If we didn't develop more, it's the fault of imperialism," said Augustin Fivale Hernandez, 80, with tearful eyes and holding his wife's hand after seeing the memorial.