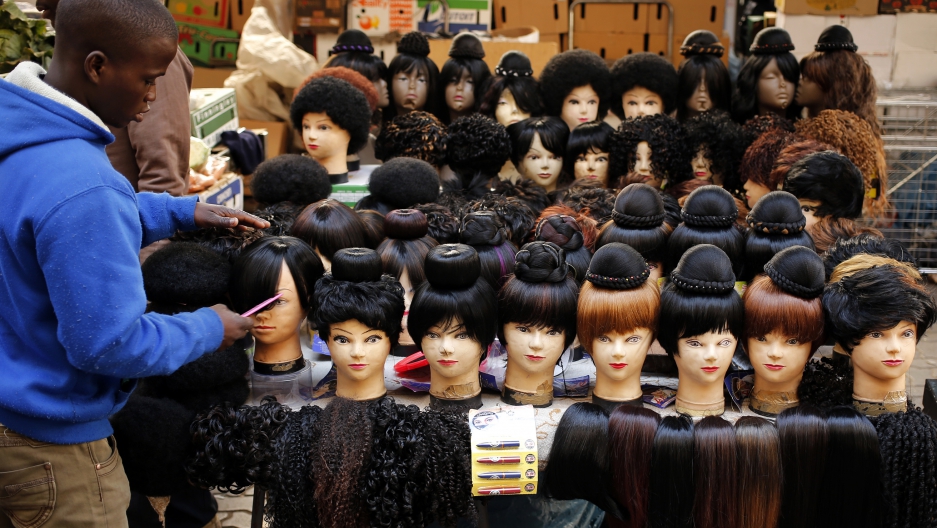 A man prepares wigs as he waits for customers in downtown Johannesburg.

You've probably heard of a hair shirt — it's rough, woven out of goats' hair and worn as penance.

Kishore Kumar donned one to make his nuptial vows. The third generation Indian hair trader is just one of the eccentric characters profiled in anthropologist Emma Tarlo's new book: "Entanglement: The Secret Lives of Human Hair."

Kumar "proudly showed me his wedding outfit and I have a photograph of him sitting in a gold throne wearing it," Tarlo says. The hair "fabric" had been dyed blonde and decorated with tiny red and gold sequins. "He also had this idea that he was going to start manufacturing hair for all sorts of different uses, such as fertilizer for food, for skin products, and cloth," she adds.

Indeed, human hair has been put to all sorts of uses. In Korea and Japan, hair has been used for the lining of men's suits. In south Indian Hindu temples, devotees have their heads shaved, and the shorn hair is carefully reclaimed.

"It's immediately put in these safes, locked safes and then it's all transported up to the sorting workshops where it's sorted into very precise lengths," Tarlo explains. "Then about three times a year it's auctioned off by e-auction to prevent hair cartels and fixing of prices."

Much of the global hair trade involves the creation of custom-made hair pieces.

At the very bottom of the supply chain is the recuperation of "comb waste," hair left in combs after brushing or in drains after washing.

"Throughout Asia you've got peddlers going door-to-door, collecting what are really globs of hairballs. And these all have to be untangled. And the untangling of this hair takes place in workshops and in people's homes in very poor places where the labor is cheapest — so in parts of Bangladesh, parts of India and increasingly in Mynamar," Tarlo adds. "When I was visiting a village in Myanmar, I could see people sorting out these hair balls just with a needle in their village homes."

Tarlo describes the work of India's Benjamin Cherian, who specializes in reclaiming temple hair for the top end of the hair market. He's working to make the hair trade more respectable and to raise standards.

"He has very good labor rights in his factories," Tarlo notes. "He's gotten all sorts of certification, proving that his factory has met international standards of trade, but that is quite rare."

A final use of human hair might have you rethinking your lunch: amino acids derived from hair can be used as a flour enhancer for the dough of pizza crusts and bagels. Those amino acids are also sometimes found in soy sauce.

"It's a flavor enhancer, but it also gives elasticity to foods. So it was commonly used in bagels and pizza base and probably still is to some extent," Tarlo says. "Whether the bagel that you ate for breakfast actually contains it, that I don't know."