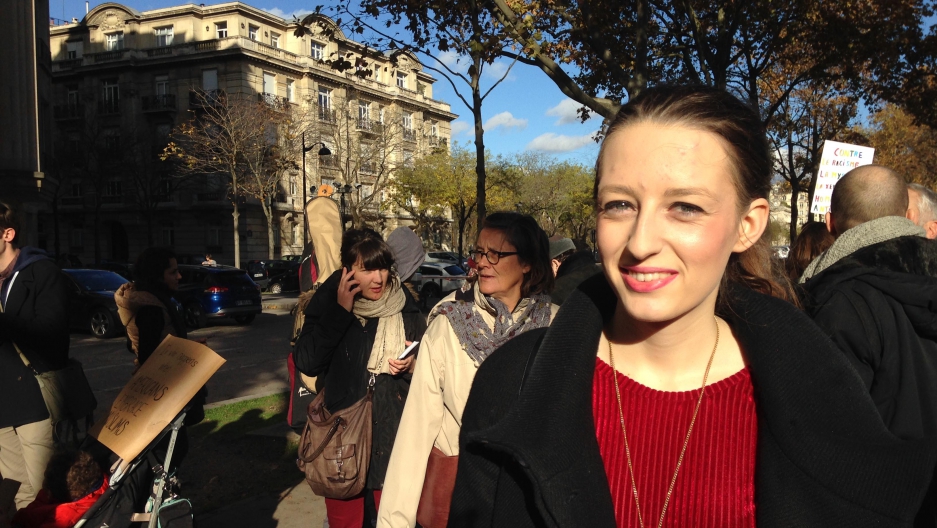 Penelope Maitrot took part in an anti-Trump demonstration in Paris. The next day, the left-leaning student crossed party lines to vote in a primary for the political right.

It has been an eventful political week in France, which has its presidential election scheduled for the spring of 2017. Voting began last Sunday in the two-round primary for the center-right parties. But this year, the French political left has been paying extra attention — and in some cases, participating.

With incumbent socialist President Francois Hollande very unpopular, some left-wing voters believe they will eventually be casting final ballots this spring for the right’s candidate, against the far-right’s Marine Le Pen.

“I remain a member of the left in my values and my principles,” said the 23-year-old student, though the next day she planned to take part in the open primary for the candidate of the right.

While this has echoes of an American scenario — a liberal Democrat voting in a Republican primary — voters like Maitrot see their context as particularly fraught.

“The right’s candidate has a very strong chance of becoming president and I want to have a voice about my preferred candidate,” Maitrot explained.

The primary, like the general election in the spring, takes place in two rounds, with a run-off between the top two vote-getters.

Of the millions of voters who cast their ballots in round one last Sunday, 15 percent identify with the political left.

Many of them came out to vote against the possible return of the polarizing former president, Nicolas Sarkozy.

And some, like 45-year-old Karine (who asked that her last name not be used to protect the privacy of her vote), voted because they’re pessimistic about a left-wing candidate being strong enough to make it to the final run-off.

“Even though I’m on the left, I have to acknowledge it,” Karine said ruefully.

She cast her ballot strategically for a center-right politician, Alain Juppé, because she felt he was the best positioned to take on the candidate she’s really worried about in the general election — Marine Le Pen of the anti-immigrant National Front.

In the end, Sarkozy didn’t make it to the run-off. His former prime minister, Francois Fillon, led the pack and faces off against Alain Juppé in the primary run-off this Sunday.

However, Martial Foucault, director of the center for political research at the Sciences Po university, says now that Sarkozy is out of the race, he doesn’t expect any more upsets in the right’s primary.

“I don’t think the prospect of Fillon,” he says, "that is the more conservative of the two remaining candidates, is enough to justify significant participation by left-leaning voters.”

But in an election process that is much more compressed than the American timeline, a lot can happen, including a stronger candidate emerging on the left.

On the far-right, the National Front’s Le Pen has grown her party’s support, especially in the year after the terrorist attacks in Paris and Nice.

Still, there’s historical precedent for the left and center-right working together to keep the extreme right from winning.

There’s the case of Le Pen’s own father. On April 21, 2002, Jean-Marie Le Pen did well enough in the first round of voting to make it into the presidential run-off.

Penelope Maitrot can remember that day, though she was 9 years old at the time.

“It was my sister’s birthday,” she says. “We had just returned from vacation and then it was a catastrophe. Everyone was calling each other saying you need to vote, you need to vote in the runoff.”

In the end, Jean-Marie Le Pen never expanded beyond his core of far-right supporters. He lost overwhelmingly to President Jacques Chirac, 18 percent to 82 percent.

But the world has shifted since then. When the elder Le Pen made it to the run-off in May 2002, it came as a big surprise. This year, French voters expect his daughter to be a leading contender.