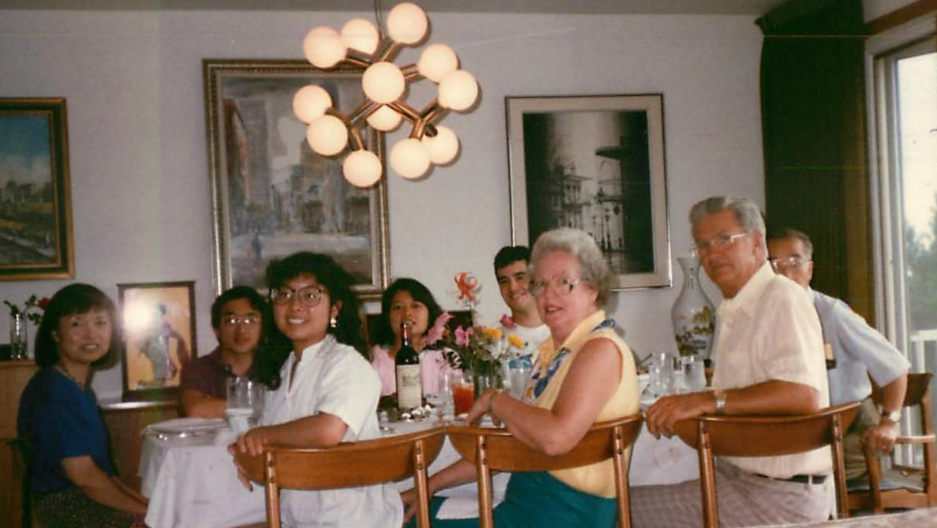 Thanksgiving in Hibbing, Minnesota with the family of Korean-American author Marie Myung-Ok Lee.

A banal, predictable Thanksgiving. It can be the ideal holiday gift.

That's Korean American author Marie Myung-Ok Lee's recollection of growing up as part of the only Asian family in a remote Minnesota mining town.

"There was always the Butterball turkey, the cranberry jelly that had the shape of the can, creamed onions that were eye-ball sized that they made every year even though none of us ever ate it," she recalls. She says her father and my mother "just decided we're just going to put all our chips here in America. We declared a love, and we're going for it."

Lee's parents survived war and upheaval in what is now North Korea.

They'd fled to the south just before Korea split in two.

Her father and mother secured a US visa and resettled in Hibbing, Minnesota, where they embraced Thanksgiving rituals to a tee. Lee says it was all part of an effort to instill in their children a sense of home and security in the United States.

Finding a job in the US wasn't easy, but Lee's physician father finally landed a position as the only anesthesiologist in Hibbing. The town came to rely on him. And all was well until the day Marie was born and a deportation order arrived from the US government. The family had overstayed its visa.

The townspeople of Hibbing, concerned that they would lose their only anesthesiologist, rallied in an effort reminiscent of the citizens in fictional Bedford Falls in "It's a Wonderful Life." They decided to circulate a petition.

"People came and they signed the petition. A lot of people wrote extra letters talking about how [Dr. Lee] would spend every night at people's bedside," Lee says.

The local congressman took the scrolls of names to Washington, but the State Department rejected the petition on the grounds that if Dr. Lee were given the equivalent of a green card he would likely leave Hibbing. It took a resolution passed by the US House of Representatives to ensure that the Lee family could remain in Minnesota because the physician was deemed "essential to civil defense."

These days, Marie Myung-Ok Lee worries that the predictablity she experienced in childhood Thanksgivings is fleeting.

"I feel as an adult that I'm very grateful that my parents have given us that kind of stability that we could be bored with Thanksgiving," she says. "But now I feel like this [2016] Thanksgiving could be very much like how the day I was born was a happy day for my parents and it just was a pretty terrible day as well."

But she's hopeful the American dream that guided her parents hasn't vanished.

"I think of the idea that my parents both escaped from North Korea and they both managed to emigrate at a time when there was no immigration from Korea, and against all odds they managed to stay here," she says. "Problems that I have should be something that I can power through thanks to the generation that's come before me."