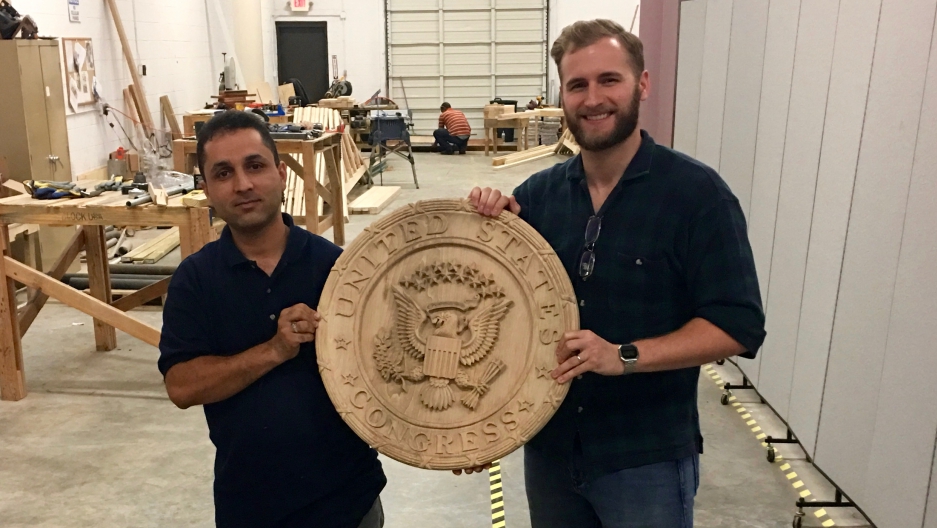 Najibullah Zahedi (left) is a refugee from Afghanistan who resettled in Georgia with his family. He's a student at the Lantern Project, run by Luke Keller, where he carved the US Congress seal.

Lots of people are worried that Donald Trump was serious when he said he would ban all Muslims from entering the United States. And that’s especially true for some of the Christians who are helping Muslim refugees resettle in America.

When Luke Keller woke up to the news that Trump would be president, he picked up the phone.

“The Unites States, we have our problems, but we take care of ours.”

The 27-year-old Keller has lots of Muslim friends. He runs a nonprofit outside of Atlanta called The Lantern Project that trains refugees in trades. Many of them come from Muslim-majority countries such as Syria, Iraq, Afghanistan and elsewhere.

“[The training program] teaches them certified construction and we do welding, we do pipe fitting, we do masonry, we do carpentry, we do electrical,” Keller says. 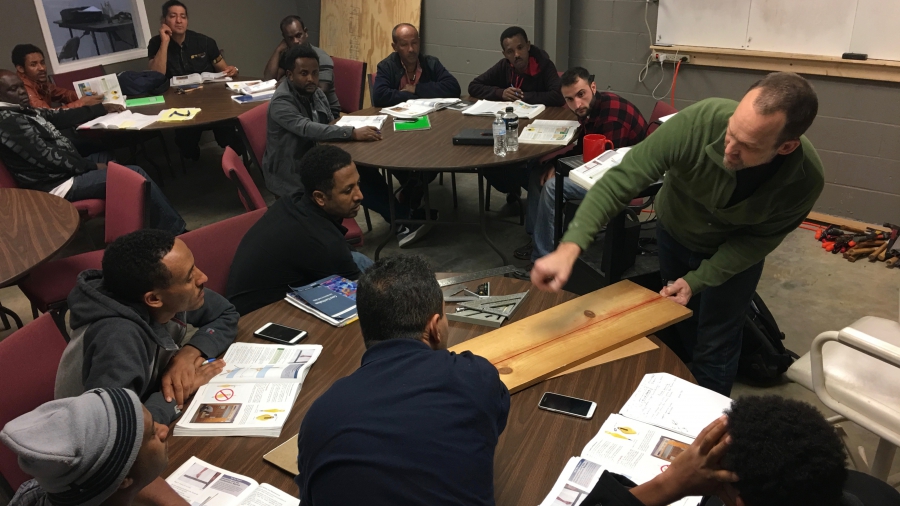 The Lantern Project in Clarkston, Georgia helps train refugees - mostly men, but a few women too - in the construction trades.

“Our job is to have these men and women come through the program and finish and be able to obtain high-paying jobs in the construction field.”

Keller walked away from what could have been a high-paying job in the construction business himself. When asked why, he explains that his faith is the biggest reason.

“To me as a Christian, a follower of Jesus, he called us to love our neighbors, period. Something that’s become very important to me is that we are not loving our neighbors well,” Keller says.

“I’ve chosen to sacrifice to show love to these men and women who are coming in from other countries, because the second part to that is, if not me, then who else?”

One line of questioning that Keller says he gets all the time goes like this: What about American-born workers? Why not help them?

He points out that the training program is open to anyone, not just refugees. And Keller says it’s all about supply and demand.

“We’ve tabooed the construction industry,” he says. “Someone would rather sit in an office making $30,000 a year, when they could be working out in the field making double, sometimes triple that.”

One of the current students is Najibullah Zahedi, who’s working on his certification as a contractor. Zahedi came to Georgia as a refugee with his family in 2014. Back home in Afghanistan, he worked as a translator with the US military. Zahedi says he had to leave his home country because the Taliban wanted him dead.

“In their idea, we are infidel[s], because we help the American or other group,” Zahedi says.

Zahedi has carved a round, 2-foot-wide US congressional seal out of solid oak. He is hoping to present as a token of thanks to American lawmakers who approved his family’s legal status.

Trump’s talk about banning Muslims from entering the United States makes refugees who are already in the country nervous, too. They worry that they won’t be able to bring their relatives here to join them.

Joshua Sieweke is with the resettlement agency World Relief, based outside of Atlanta. After inauguration day, he says Trump would be able to put a stop to the refugee program very easily.

In fact, the American president has various ways of putting a stop to certain groups of people entering the country. Right after Sept. 11, 2001, for example, most refugees were blocked from entering the United States.

The incoming Trump administration seems most interested in preventing Syrian refugees from coming to the States — people like Malek Alarmash and his family. The 23-year-old arrived in Clarkston, Georgia three months ago with his parents and his sister.

Malek Alarmash works at Refuge Coffee in Clarkston, GA. The company is run by a Christian couple and hires newly arrived refugees.

Alarmash says he was arrested in Syria at an anti-government protest back in 2012, and without giving too many details, he says he was tortured while in prison.

“I wished to let me die,” he says. “They hurt me. …they are animals. And animals don’t do [what they did to the prisoners].”

Alarmash says he and his family fled across the border to Jordan. The vetting process to be approved as refugees by the US government took around 18 months. When he and his family found out they would get permission to resettle in Georgia, Alarmash said he did a Google search and got excited about the Georgia Aquarium.

Several weeks later, the family paid it a visit.

Now, Alarmash works at the Refuge Coffee Company in Clarkston. He says his family has no fear about the political atmosphere post-election. To describe his demeanor about his new life in America as "upbeat" is an understatement.

“Because we know we are living on the land which has freedom and human rights,” he says with a big smile. “Thank you for everything! Thank you! Thank you!”

Alarmash is the kind of person that America should welcome with open arms, says Joshua Sieweke, who describes himself as a conservative Christian who has almost always voted Republican.

Sieweke says the US cannot just throw open its borders to everyone, but if people ask him about the security threat posed by vetted Muslim refugees, Sieweke tells them about the women who work at the day care center at his church.

“These are Muslim women that we’re inviting into our church to care for our children. I have three kids. The oldest is 6, the youngest is 17 months,” Sieweke says.

Back at the construction training school, Keller tells me he has this kind of conversation often. When people find out that he’s helping Muslims come to America, they express serious doubts. But many Americans, Kellery says, have never even met a Muslim before.

So, he talks about the issue in terms that his fellow Christians can understand.

“I know personally, getting to have conversations, developing relationships with these Muslim men, who are now some of ... my best friends, they’re the most reliable, most dependable, most loving, most generous, most Jesus-like people I know,” Keller says.

“Yeah, the most Jesus-like people I know are these Muslim men.”