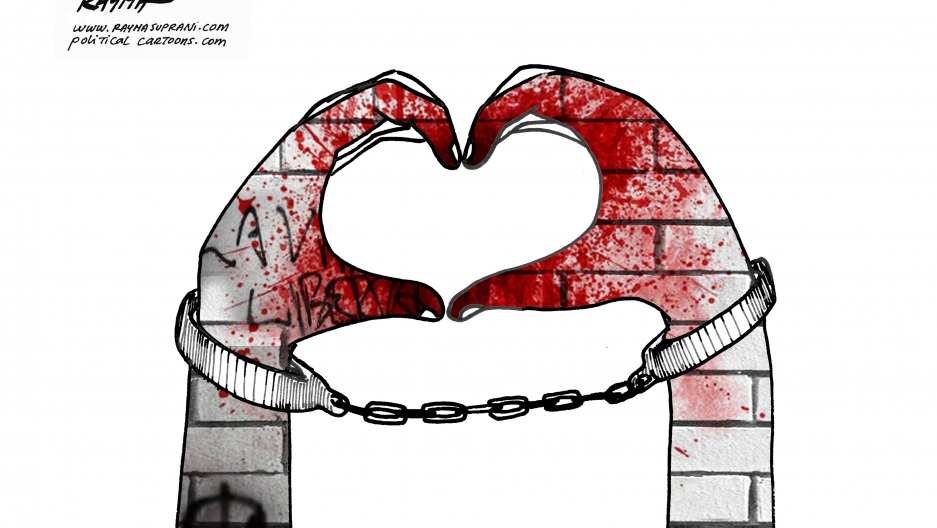 Since Nicolas Maduro became president in 2013, the Venezuelan government has arrested and detained thousands of citizens. Most but not all are let go within a few days. One who remains incarcerated is opposition leader Leopoldo Lopez. Another is Joshua Holt, an American from Utah.

Francisco Marquez wants the international community to understand something about the government of Venezuelan President Nicolas Maduro: "You are dealing with a government that currently engages in having political prisoners and systematic torture within their prison system."

A drawing of Francisco Marquez by cartoonist Rayma Suprani (done before Marquez' release) as part of an effort to draw attention to the plight of political prisoners in Venezuela.

Marquez is 30 and a dual citizen of the United States and Venezuela. He was arrested in June while working for the political opposition and campaigning for a referendum to remove Maduro from office. He was in jail for a month before being charged with money laundering and conspiracy to incite violence. He says the prison conditions were dungeon-like.

Marquez says he spent most of the time in his jail cell. He said it was dirty and smelly. He got scabies, too. But that wasn't the worst of it.

"Imagine hearing the screams of people being beaten," he says. "I would actually see beatings as well."

Marquez wasn't tortured himself, but he was psychologically tormented. "When they beat someone in front of you for half an hour and you hear him scream, they look at you and they make sure that you get the message, that if you go out of line and do something you're not supposed to, you know you'll get that treatment," he says.

Opposition political leader Leopoldo Lopez has been in prison for nearly two-and-a-half years. He's serving a 14 year sentence for inciting violence at anti-government protests in 2014. Lopez denies all charges.

Marquez says the brutal treatment he witnessed is systematic. "It's not like a one-off prison guard doing this. The warden in my prison, I saw him as he beat other prisoners with what all the prison guards had: this bat with a flat surface," he recalls.

Alfredo Romero is a human rights lawyer in Caracas and works on behalf of political prisoners. He says since student protests rocked Venezuela in 2014, there have been hundreds of political prisoners, but the actual number in jail at any one time rarely rises above 100 to avoid international scrutiny.

Maduro has consistently denied human rights abuses and typically deflects blame onto "the ongoing harassment of the imperialist powers of the United States."

Marquez doesn't exactly know why he was set free, but he is extremely grateful.

"At the end of the day, what I truly know is that my arrest was political, and that my release was thanks to multiple points of pressure, both domestically and internationally," he says.

But his release was bittersweet. "On the day I was released," he says, "another good friend of mine was put in jail, from the same political party."

Gerardo Carrero, a Venezuelan political prisoner who has been jailed since August 5, 2014.

Romero says as of Nov. 22, there are 108 political prisoners in Venezuela. Some are incarcerated. Others have restrictions on their freedom. They can't leave the country. They must present themselves to court. They're prohibited from talking to the media or attending public meetings. "Most of them are protesters, students. Some have been persecuted for tweeting," he says.

Maduro was elected in 2013 to succeed President Hugo Chavez, who endorsed him before he died. His United Socialist Party of Venezuela controls the judicial system, which intimidates the political opposition through arrests and detentions, a point echoed in a 2015 report by Human Rights Watch. Romero says since January 2014 there have been nearly 7,000 political arrests and detentions.

Marquez is a lawyer by training and a political activist by choice. He graduated from Harvard's Kennedy School of Government in 2012. He says he will continue to push for change in Venezuela from his forced exile.

Venezuela is a ticking time bomb, ​he says. The economy is in tatters and a humanitarian crisis is deepening. "You have to choose between eating or buying medicines."

"What those of us in exile need to do right now is to continue to pressure the Venezuelan government to release more prisoners and to have constitutional and peaceful change in Venezuela," he says. "Because that's what the people what. They're desperate for change."