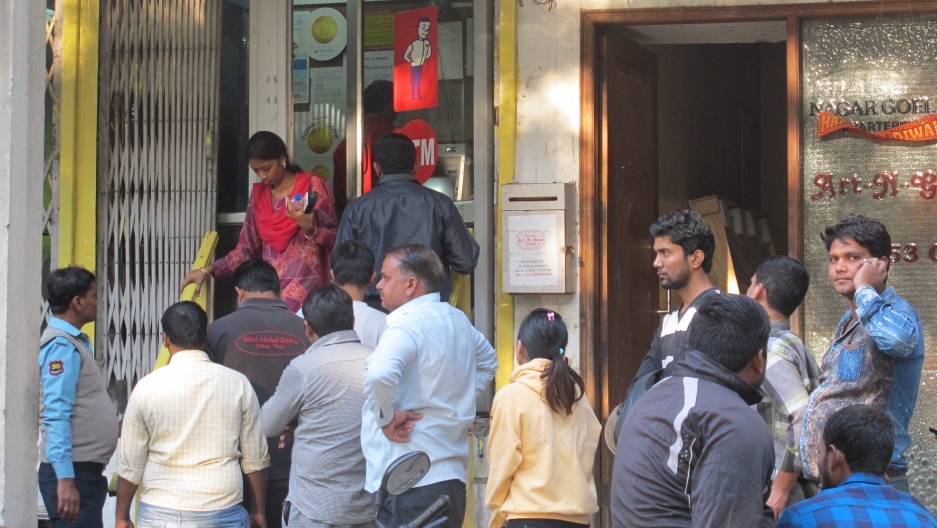 Two weeks after Prime Minister Narendra Modi announced the demonetization of 500 and 1000 rupee currency notes, residents of south Delhi continue to line up in front of ATMs in hopes of withdrawing cash.

On the evening of Nov. 8, after neighborhood shops had closed and ATMs had locked up, the prime minister of India announced that 500 and 1,000 rupee currency notes would no longer be legal tender, effective at the stroke of midnight.

In one fell swoop, Modi deemed 86 percent of the cash circulating in India “worthless scraps of paper.” The “surgical strike” on money, intended to curb the use of so-called black money and crack down on tax evaders, sent a shock wave through the Indian economy and exposed one of its most pervasive problems: the exclusion of women from the formal banking sector.

Two weeks after the announcement, a group of women sat wearily outside a State Bank of India ATM in south Delhi. They had traveled for an entire day from the city outskirts to open an account and exchange their old currency notes, only to find a sign outside every bank stating they were only accepting deposits from existing customers.

The matriarch of the small group, who declined to give her name, says she never earned enough money to need a savings account. But left without any other option when the notes went out of circulation, she traveled into the city with her life savings.

“The banks are refusing us,” she says. “We came to open accounts and deposit the small amount of money we have, but the banks are not accepting new members. They are overwhelmed as well.”

The government has come under much criticism for the poorly planned execution of the nationwide demonetization. Not only was there no time for families to get their finances in order, but banks and ATMs ran out of the new currency notes within days. For women who live hand-to-mouth, the lack of cash has taken a serious toll.

“[Demonetization] is disproportionately affecting women because women are the cornerstone of the cash economy,” says Ranjana Kumari, director of the Center for Social Research in New Delhi. “They are the ones who are forced out of traditional banking because that is typically a role held by the man of the house."

Gender inequality and financial inclusion go hand-in-hand in a developing economy like India’s, and women’s financial problems go back generations.

In the old days, before credit cards and savings accounts came into the mix, women would protect their personal wealth by wearing jewelry. Money was passed and saved through nose rings, gold bangles and precious stone earrings. In case of an emergency, a woman wouldn’t need to approach a husband or in-law to procure cash; she would pawn what she was wearing.

Today, not much has changed, says Kumari. According to a recent study by the CSR, due to illiteracy and mistrust of financial institutions, only 32 percent of women have formal bank accounts. Instead, they keep their money in stacks of cash in their homes, tucked away in pillows, mattresses, locked cupboards and still, as jewelry.

“Whatever income poor women get, they spend it on their family and then save a small amount of cash in their home, away from their husbands,” Kumari says.

The cash either comes in small amounts from their spouses, or for daily wage earners, in incremental — and inconsistent — amounts from employers. Daily expenses keep these women from accumulating large amounts of money, and emergency expenses like a daughter’s wedding or family member’s illness can clean out a life’s savings completely.

“Their lifestyle depends on their savings,” Kumari says. “When you look deep into the Indian economy, many families are indebted because of large social expenses like weddings, death ceremonies or the birth of children. Failure to put on these events puts a heavy social burden on women that is different to the pressure on men.”

Due to the huge number of weddings in India in the winter months, the government recently increased the amount available for withdrawal up to 250,000 rupees — roughly $3,600 — to pay for weddings. But a band-aid fix for a circumstantial problem will not help the millions who depend on cash to live day-to-day.

“There is more tension, more violence, more agony,” Kumari says. “Rich and poor are all sitting around because there is no money to be exchanged. You don’t even have cash to get a cup of tea."

Editor's note: The audio version of this story misstates the amount of the Indian government's one-time waiver for withdrawing cash for weddings. It should be 250,000 rupees, about $3,600.