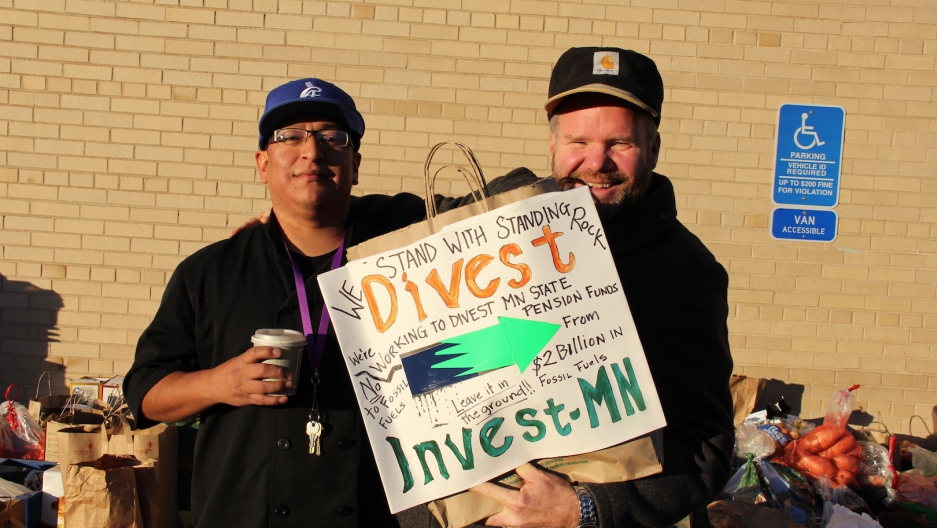 Brian Yazzie, who works for the Sioux Chef in Minneapolis and Pat Kerrigan of the Organic Growers Association of Minnesota show their support for those camped out at Standing Rock.

On a chilly day earlier this week, Brian Yazzie was running back and forth in front of the First Universalist Church in Minneapolis. Wearing a light pair of pants and a short-sleeved shirt, he was too busy to worry about the cold wind whipping around him.

He was gathering donations of food for an epic trip to the Standing Rock Sioux reservation in North Dakota. The haul is eclectic, ranging from crates of butternut squash to bags of Halloween candy.

But Yazzie isn't cooking just any menu. For five days, he'll prepare three meals a day for those protesting a 4,000-mile pipeline that they claim crosses over sacred land and jeopardizes their water supply. That's breakfast, lunch and dinner for 3,000-4,000 folks.

The cooking begins Wednesday, and continues of course through the Thanksgiving holiday. You might think that means mashed potatoes and pumpkin pie, right? Think again. For a holiday that many Native people feel misrepresents them and spins a rosy tale of colonization, Yazzie has something else planned.

“Knowing the history and historical trauma of Thanksgiving, for me, being a chef, I focus on indigenous food," he says. “To me it’s about healing and feeding the people to keep them healthy.”

The trauma Yazzie is talking about is a long legacy of abuse and disempowerment. Native people weren’t even US citizens until 1924. They couldn’t vote until then. Many Native children were forced to live in boarding schools, far away from parents and other family.

For chefs like Yazzie, re-introducing an indigenous diet helps Native people reclaim their health and spirit.

“People who grew up on commodity food, switching from that palette to healthy food is a challenge in itself,” he adds.

Yazzie is going for a menu that features indigenous foods special to this region. Food his ancestors, and the ancestors of those Native folks out at Standing Rock, used to eat.

He’ll be cooking up wild game — venison, bison, wild duck, and yes, some turkey too. Yazzie wants to stay away from chicken, pork and beef, because it wasn't eaten back in the day. He’s using wild rice, root vegetables, maple syrup, juniper berries and fresh walleye caught from lakes in Minnesota.

One of his recipes is a buffalo heart paté with juniper berries, smoked salt and sage or cedar. It'll be served with kale or micro greens. 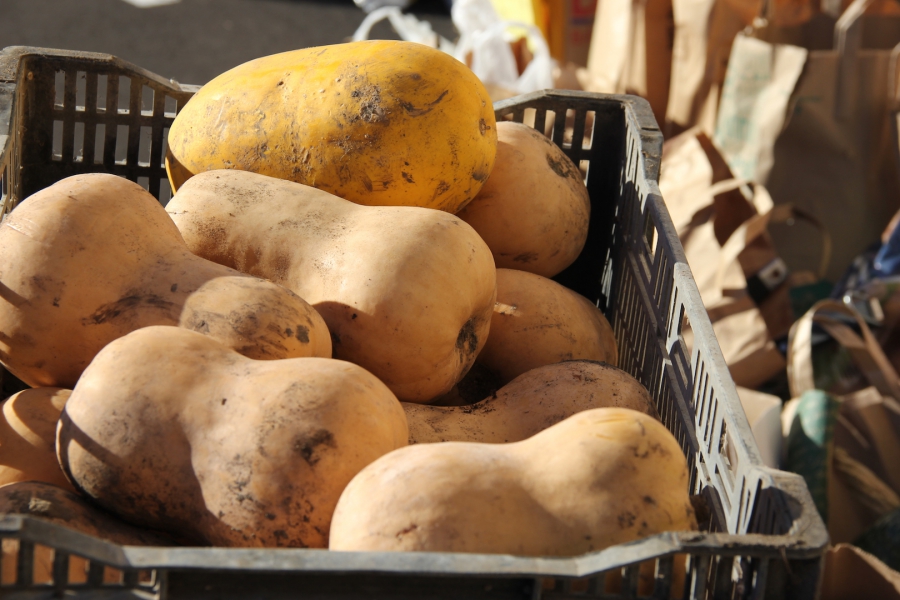 Some fresh, locally grown butternt squash was one of the items donated during the food drive for Standing Rock campers.

Yazzie grew up in Dennehotso, a Navajo reservation in Arizona, the youngest of seven kids. His passion for cooking came from following his mom around. He moved to Minnesota four years ago when he wanted to go back to school. He was lured to Saint Paul College by a flier advertising its culinary school. He signed up and met Sean Sherman, who owns the Twin Cities business the Sioux Chef.

Sherman took Yazzie under his wing as he created a catering business specializing in healthy, indigenous foods. It turns out non-Native people liked it too. He’s always busy, catering for sports teams like the Minnesota Timberwolves or events at the Minnesota History Center.

Sherman’s business and passion for regional and indigenous foods inspired Yazzie to work for him, and to go to Standing Rock.

Back outside the church, a steady stream of cars with bags and crates full of fresh, organic produce wait to be sorted and loaded into a U-haul Yazzie and his girlfriend rented for the trip. They had to get a bigger truck after all the donations came in. More than 200 people dropped off everything from new and used cooking supplies to snacks like pretzels and power bars to, even, buffalo hearts.

Yazzie and his boss, Dana Thompson, were overwhelmed by the outpouring of support for those at Standing Rock.

“This is a great outcome. More than I could’ve expected,” Yazzie said. 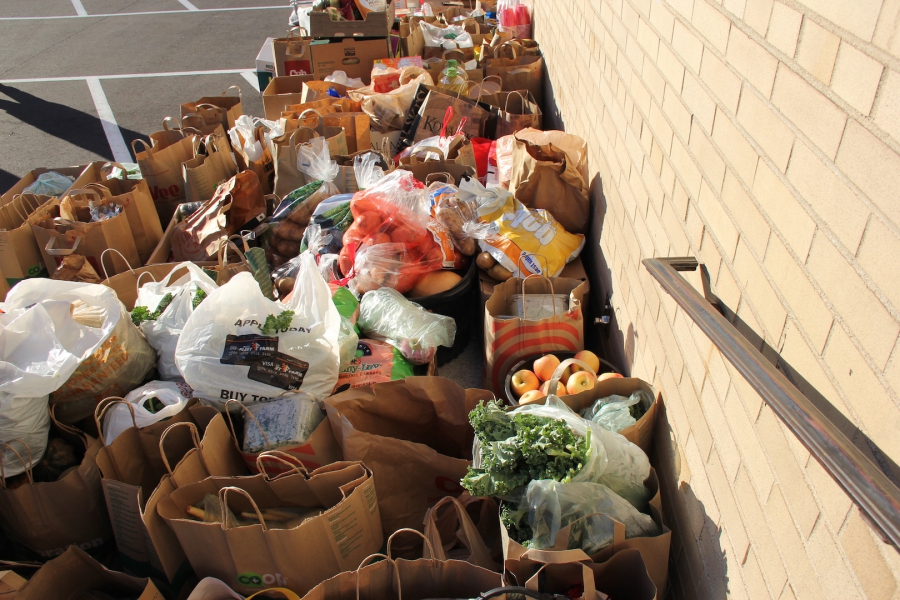 Bags of fresh, organic produce wait to be loaded into a U-Haul.

Curious about what Brian Yazzie will serve at Standing Rock? Here's a recipe you can try:

Directions are simple, if you're not going to cook the hominy from scratch. Sear the bison chunks in a sautee pan in olive oil. When done place in stock pot with broth and add hominy. Preparing hominy can take 5-7 hours — you'll need to first take off the husks by boiling with cedar ash. Then simmer it for 5-7 hours until soft. Be careful, hominy expands so don't go over the two lbs called for in this recipe — even if it's prepared. It'll crowd out the meat! For fesh sage — place it in the oven on a sheet pan at 200 degrees for 4-7 minutes. When done, crumble into the soup. Add salt and pepper to taste.